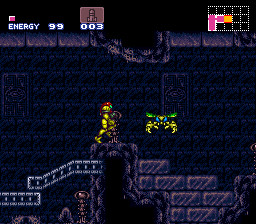 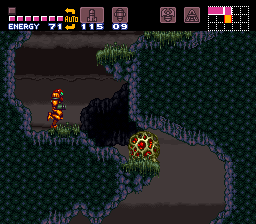 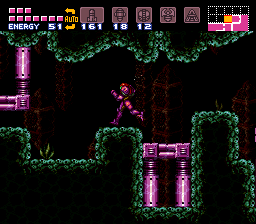 )
98% in 5:16
Read More
A very well made vanilla hack. It has a vanilla feel, but it's still something totally different. The route and item order was really interesting, although it was hard to tell if I was ever on the right track or sequence breaking. Tourian was pretty creative. Some good quality of life improvements. Pretty fun hack, would highly recommend.
By croissant bug on Apr 24, 2020 (

)
No completion stats.
Read More
Really good. I loved the new minibosses and how the game was more challenging without going into kaizo and spike retardation!
By metasamus on May 19, 2020 (

)
No completion stats.
Read More
Good hack, but you should consider to use different tilesets in your future projects.

The game looks good, but same graphics all the time make the experience less excited.
By PHOSPHOTiDYL on Aug 25, 2020 (

Read More
Really good hack. Nice little spin on the plot, where Samus gets hit by an asteroid and loses her power ups. As this is slightly branched off from the main timeline, we don't get to go into Ceres this time, which means that Samus doesn't see Ridley capture the baby. It's essentially "What if Samus went to Zebes and not get the distress signal from Ceres?" 9.5/10
By Pixel_Tiger on May 31, 2021 (

)
86% in 0:00
Read More
A good half-hack which brings a fresh breeze into your vanilla experience. If you know your way around zebes, it's possible to sequence break as always. Also a good choice if you're a beginner as it doesn't require any tricks!
By DeviousB on Jul 02, 2021 (

Ok. This hack reestablished my FAITH in Super Metroid Hacks. (Well, Some of them anyway)
This hack was a challenge but not a {"FUK THIS SHIT!!!"}, throw your controller on the floor hack.
There was quite a bit of back and forth. But that's why it's called Super Metroid. In other words, Super (Back and Forth) Troid. HA-HA-HA. Good job MetroidNerd#9001! Let's See MORE!
By Zhs2 on Apr 13, 2022 (

)
91% in 4:32
Read More
Pretty alright for a half hack, although it did pick up several jokes from the boys about how it was actually a quarter hack (complete with Tourian and escape DLC). The biggest problem with this hack was that the path to grapple beam was not obvious (played on version 1.2). I ended up wandering around for far too long discovering that every single route through Norfair required grapple and I ended up grabbing Wave before returning to find that there were actually two crumble blocks that revealed the route to grapple where previously I only found one. I can also think of a few permastuck scenarios in Maridia if you managed to sidestep spring ball. My final question is, why can't Samus just leave after recovering all of her items?
By Tundain on May 03, 2022 (

)
89% in 3:06
Read More
This is a halfhack alright, but it's definitely not like other halfhacks. This one has real quality in it. Gameplay is solid, and while the general map is just like vanilla, the way rooms have been changed and the world has been organized really makes it a nice, new experience. The negative tho is the fact that progression wasn't really obvious in some places (i didn't find the crumble blocks to grapple at first, but maybe that's just me). Tourian was also very nice.
A solid 4/5 orbs, give this one ago
Also, animals saved
By Zagan on May 22, 2022 (

)
86% in 4:12
Read More
I had a lot of fun with this one.
The new paths and redesigned areas made the progression very refreshing even for a halfhack.
The level design is very good in general, and Tourian and escape sequence were particulary great.
There are a few minor issues though,
Some rooms where you need grapple were very annoying,
I managed to beat Botwoon without Gravity but I got stuck in the sand a few screens later, I felt I shouldn't be allowed to go that far.
By drb on Oct 05, 2022 (

)
88% in 3:20
Read More
This one takes me back to the early days of SM hacking - when building on top of the vanilla map was a common approach - but definitely takes it up a notch or two. It's not perfect; a little too reliant on tanky space pirates and the first hour or so is kind of an underpowered slog, but it opens up nicely after Grapple. By the end I found myself quite impressed with how the vanilla map was being reinterpreted - at certain points I almost forgot I was playing a halfhack, and Tourain and the escape sequence were nice surprises. Give this a go if you're an old-schooler, or if you like a double shot of vanilla in your hacks.