Description
It's Super Metroid but on its side.
Enemies are still normal though. 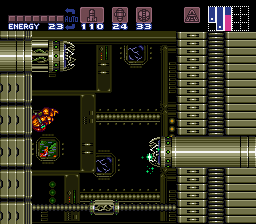 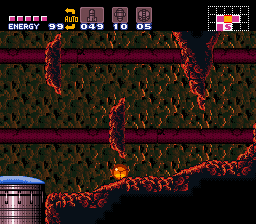 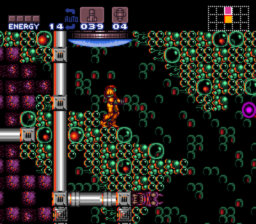 )
No completion stats.
Read More
It's a hack that really turns the game on its head! Or... its side.
My only issue is how strange some of the rooms look, but that could be considered a limitation on the behalf of Super Metroid.
Great stuff. Definitely worth a play.
By MetroidNerd#9001 on Aug 11, 2018 (

)
72% in 2:17
Read More
Welcome to Walljumping: The Hack! For such a simple concept, this hack is pretty fun. Most rooms are decently moderate in difficulty to traverse through, which is par for the course considering that Super Metroid is not meant to be played this way. That being said, some rooms absolutely suck. That may have been partially due to the route I took, so I won't take off too much. Plus, they added underwater walljumping to make the rooms possible in the first place so I also can't complain too much. If you are looking for a challenge, this is the hack for you!
By GaRan on Feb 13, 2019 (

)
No completion stats.
Read More
Not sure how easy or difficult it was to simply rotate a hack and do modification for 5 rooms with a tile adjusted or not so the painstaking work may not have been there. But the idea of this hack is excellent and it is very fun and workable. Just as fun and challenging as the OG. Its just so satisfying to play. Both wall jumpers and non wallies must play this hack.
By vexbanearamori on Jun 24, 2019 (

)
No completion stats.
Read More
Hope you enjoy walljumping... and no not with the improvement. just for that i gotta give it a 3. If you're going to make the player do 100% walljumping to get through...maybe mod in the better version that isnt so critical that those that play with analog sticks can actually do it easier?

)
13% in 1:56
Read More
Not 5 stars because there are still a few problems with this hack. Many easy permastucks and such.
Crumble blocks are basically entirely removed because they'd be useless vertically, which makes for some nice sequence breaking possibilities.
Also, this is low%. 13% is lowest percentage possible.
By benox50 on Oct 18, 2020 (

)
86% in 2:40
Read More
It's ridiculous but it's certainly interesting. It's fun enough and a cool experience despite the game not being designed for it. I'm docking an orb simply because the concept itself isn't exactly based around having fun as much as it is novel so it's not an experience I'd recommend unconditionally. It's VERY well executed from a purity of concept standpoint so it's pretty much perfect for what it is. Thanks to the creator and all who may have helped.
By MultiDarkSamuses on Mar 13, 2021 (

)
45% in 3:27
Read More
I went into this expecting a bit of pain with wall jumping. Not as bad as I expected, my controller behaved, and honestly was very enjoyable for the most part. There are a handful of issues I had, though. Two rooms struck out as annoying to get through. The ninja pirate room and the Tourian room with two giant sidehoppers were both awful.

In the ninja pirate room, the only safe zone to trigger their jumping animation is on the door cap, and if you miss a shot it's very easy for it to bounce and open the door, resetting the room or making it impossible to get through. That wasn't very fun and I got through it by glitching the pirates into the same space, so they acted like one and meant that they were both vulnerable at the same time. I got reset in that room multiple times by shooting one pirate while vulnerable and the shot went through it and hit the other, causing it to bounce into the door.

The Tourian room, there's a side hopper that takes up more space than the door. I actually died in that room attempting to invincibility frame my way through it to the door, which is how I ultimately got through that room. That enemy placement is awful and I couldn't see another way through it.

Those two rooms aside, there's a decent bit of difficulty with the room designs, liquids being at the bottom of rooms is one of the harder parts, though wasn't too awful. It did make lower Norfair a pain to get through, but part of my difficulty there was forgetting to grab screw attack. Overall, a very fun hack to play with some minor adjustments that could be made.
By Insomnia Speed on May 09, 2021 (

)
100% in 3:56
Read More
To be honest, I hate infinite wall jump. But considering I have played Mirrortroid and Uptroiddown, so I have to give this hack a shot. I would say this hack is better than Mirrortroid but not as good as Uptroiddown.
By mfnomega on Aug 07, 2022 (

)
77% in 2:22
Read More
I put off playing this because it seemed like a novelty to me. I really enjoyed it. So many fun surprises realizing how the rooms and enemies work different. The only down side is that I recommend you be fairly familiar with the original before playing this because everything is so weird that some areas would be really difficult otherwise. Because the game usually has fewer rows than columns, when you rotate the two certain walls are out of view.
By VirtueAvatar on Sep 17, 2022 (

)
91% in 3:00
Read More
I played this to completion when it first came out in 2017 and I've just finished a replay now in 2022. This is an incredibly enjoyable hack. Really full of surprises in every room.

Wallhacking is a must, and it helped a lot being able to infinite bomb jump and crystal flash. Interestingly, there is a tricky bombable wall early on in Crateria that sets the tone for the rest of the hack. If you can get past that wall, you can likely deal with anything the hack throws at you.

A lot of the issues I had the first time I played just didn't come up here, and I'm still playing the same version as before ("Beta 11").