Description
Suspicious Space Pirate activity has been detected by the Galactic Federation in the remote Tog'Tassano system and Samus is sent to check it out. Discover the truth of what's going on and power yourself up in this frigid, hostile environment.

Super Metroid: Cryogenesis is a romhack created for a streaming contest. This is the contest version with cleanup fixes from what was seen when it was streamed. More is planned and being worked on to expand, however that doesn't mean this should feel half complete. A compact adventure awaits you with a focus on clean, thematic visuals and unique level design. 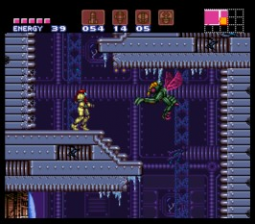 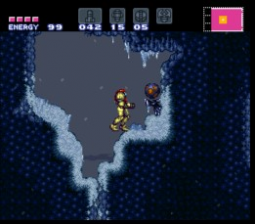 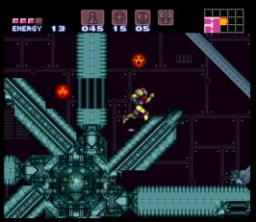 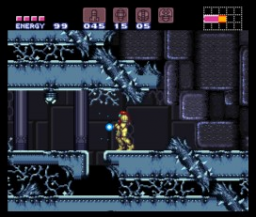 )
75% in 4:20
Read More
Awesome hack! splendid work with the tiling, every room felt amazing and unique in it's own way. The map structure was quite nice, and the gameplay as well (i enjoyed the "elevators" in some rooms that brought you back up). Difficulty wise it's pretty well-balanced.
I love the new item that was introduced, but it's pretty late-game meaning you don't get to do a lot with it (hopefully it will get more attention in the dlc). Overall, amazing hack!

)
76% in 3:05
Read More
You don't know how cool it is for various assembly patches to be showcased in a hack until you play the full-fledged hack that actually showcases them. Allow me to say first that the new item is the most satisfying way to kill those spiked Maridia floor hiders, hands down. Beyond that, this hack does very interesting things with transitions from foreground to background and rooms within rooms. The screenshots don't showcase the rooms with the hands, but this is the hack you come to for the rooms with the creatively tiled hands (among other things). My only complaint about this hack is that Hotlands seemed like a more intuitive and user-friendly experience than this one, but this hack is by no means evil - just extremely damaging at certain parts, and a little obscure in the case of finding grapple beam. Recommend you definitely give this winner of the contest it was in a try today.
By Sickwood on Jan 16, 2022 (

)
100% in 7:25
Read More
Addictive hack that combines the impressive artistic use of tiles reminiscent of Eris and the best use of the background layer yet. The map looks sneaky small, but is virtually 1.5x bigger thanks to the author's Billy Mays 2 for the price of 1 room making strategy. Tons of clever hidden secrets that never got boring hunting out 100%. Some bosses had a little help from their friends and it sounds like they are getting reskinned for the final version. Can't wait for the final expanded version and no matter how much or little is added, this is an epic hack. My only personal hope would be that the final boss gets his own area because you kind of just stumble upon him when remembering to check a certain area after an upgrade, but no big deal. Thanks for the hack and congrats on the win.
By feenix_n on Jan 17, 2022 (

)
No completion stats.
Read More
Very fun! Every area looked amazing and flowed well, overall item progression was fun and difficulty curved well. I didn't realize you could walk through the wall in front of wave, so I was stuck for a bit until I pulled it up in an editor. Other than that I went through the whole game smoothly and had a great time! Definitely recommend to anyone of any level.
By DramaticMarquinh0svi on Jan 19, 2022 (

Read More
Absolutely gorgeous environments! So nicely done with the tiles.
Great atmosphere, you really feel you are in different unique places.
I like the puzzles that are in the game, it was fun to solve and fun to figure out how to get the items.
One minus is I got lost for quite some time in the beginning, 58:30 in the video. I think maybe it was too hidden?
The hack was not so hard though.
The special new item was cool and fun to use, I wish there where more places to use it!
Play it! :D

)
79% in 2:44
Read More
Amazing hack that felt like a DMantra hack at times. I greatly enjoyed it. Well done.

)
59% in 2:26
Read More
Before I go into any detail I want to say I really enjoyed playing this and I'm looking forward to the finished version.

I got 59% in about 2:30. I like to speedrun (especially rando) so I have a lot of experience with SM. Even so, the pacing of the hack was really well done up until a certain point (more on that later). I liked how large the levels were and how much space there was between major upgrades. I avoided sequence breaking and liked how the hack lets you just poke around and find stuff.

Personally, I'm not the biggest fan of the foreground/background mechanic. This isn't limited to this hack though and it's purely personal taste. If it does appear in a hack I prefer it to be more contained, like only used within a certain area for example. That said, most of its usage in this hack is fine except for one Morph Ball room that used it rather extensively and ended up with a visual bug.

I'm a much bigger fan (heh) of mechanics like the big fan room in Void Engine. I can imagine a mechanic like that being slow or frustrating but it's implemented well here.

Unfortunately, to me the hack does feel unfinished. I was really vibing with the pacing. I beat Draygon, got Power Bombs and was looking forward to what new area would open up, but I was disappointed when shortly after, I found screw attack and the Ridley fight. I was even more confused to see that the game ended right after.

I realize it's partially my fault due to my playstyle, but when I reach the credits on romhacks I often don't feel the desire to go back and 100%. So I'm curious about how much I missed. Did Phantoon or Golden Torizo show up anywhere? I also never found charge beam but it wasn't a problem because of how much ammo I was able to find naturally.

I liked the visuals and the tilework. The only issues I had were certain colors/tiles I found hard to read as passable or impassable. There's a minor audio bug in the large room with the Namihe enemies in the second area. The impact sound for the Meteorite item seemed like an odd choice but that's just personal preference (I would have just used the Screw Attack kill sound, or the Shinespark impact.) I would love to eventually see some custom BGM to complement how distinct each area felt. Certain themes from vanilla SM don't really fit the themes you find in romhacks.

This was fun to play and critique. I highly recommend Cryogenesis to anyone interested in SM hacks.
By dagit on Mar 30, 2022 (

The only real criticism I can conjure up is that the beginning is slow. It took me a while to find a particular path. This happened a couple times. However, this did give me a chance to get familiar with the map. It's just that maybe a few early secrets are a little too hard to stumble upon? Then again, I enjoyed the challenge of figuring those things out.

I guess my recommendation to other people is play this and assume you might get stuck and have to scratch your head and look around.

I did one sequence break the author didn't anticipate but it didn't cause any issues like a permastuck. So that was nice. It was fun to discover the sequence break and it gave me access to a rewarding item.
By ocesse on Apr 04, 2022 (

)
90% in 6:16
Read More
Creative design of puzzles and good graphics, I liked so much the room of the hands. There are things that can be improved, but this game was designed for a contest, so it's acceptable. I hope that in future versions of the game new music will be added according to the new areas, that would be remarkable. The only bad thing I suffered is that I wasted a lot of time trying to find Speed Booster, because I thought that for the new item to work, it was necessary to have Speed Booster in your arsenal, but it turns out that I was not correctly executing the order of buttons necessary to use the new item, anyway, it was only my fault. I was playing in bsnes-hd and this game looks pretty good in widescreen :)
By Nefertenia on Apr 30, 2022 (

)
80% in 4:55
Read More
Nice scenery and magnificent design. Had a lot of fun with the puzzles and especialy with the new item :D Hope to see more of it with the announced dlc :)
By therealsusan on May 05, 2022 (

I about rage quit in the beginning, couldn't find grapple. Guess I should've guessed by the ratings that sequence breaks weren't required, but I was trying anything to progress. Ultimately had to look it up, but afterwards didn't have any trouble.

I soft locked twice, both in Urdant, once in the huge grapple room on the west end... I tried seeing if there was a path behind some missiles and the block reset (no bombs) & the other time in the vertical shaft just below the save point in the vines between the platforms (didn't have morph)

Besides the graphics glitch with BT, there's a camera scroll glitch I noticed at least twice, but otherwise nothing too major (assuming that map deal in Maridia is intentional)

Anyway, enough with the bad & ugly, here's what was good:

The tile work is spot on for creating memorable and intuitive rooms & the new sprites were nice. The background/foreground switching was slightly odd but it worked and it was a nice touch at that amount.

The few puzzles were really good, particularly the one in the aptly named void engine

This easily could be a 5* if it was finished and the beginning wasn't so easy to get lost in.