Description
Here's a hack i made because i felt like it.

Nowadays, with the ongoing rise of the SMART editor, hacking became a lot easier (at least to me for sure).
With how much work SMART does for you behind the scenes, it's a lot easier to make more complex hacks with more new rooms, new layouts etc...
However, this means that basic, vanilla hacks might get more rare (you know those hack which use only the vanilla rooms and a vary vanilla layout).
These hacks were also nice and i know there's ppl out there that like them, so here i just decided to make a basic, non-special vanilla hack, bc i like those as well.

Sm familiar purposely reuses vanilla tiling, the vanilla rooms, vanilla layout. the whole point of this hack is to give you not-so different from vanilla gameplay.
All mechanics also stayed completely vanilla, except item fanfares, because screw item fanfares, always remove those.

So if you like novelty, and creative new challenges, don't play this hack!

If you like a standard, vanilla experience, then this hack is for you.

Ps: the difficulty might be a bit harder than vanilla in some spots, but hopefully not too much.

v1.03:
-fixed bt softlock
-fixed bad scrolling in some spots
-fixed title demos
v1.05
-made the rising liquids rooms considerably more forgiving (mainly by lowering the speed at which they rise)
-made some energy tanks more obvious
-added shortcut in Maridia to reduce backtracking
-fixed annoying dragon room in norfair, now they most certainly won't jump in your face 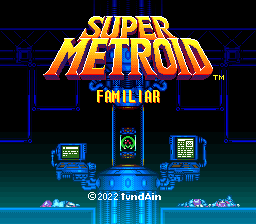 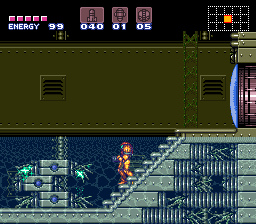 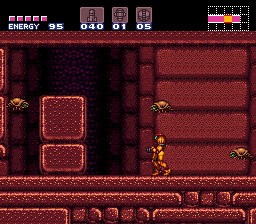 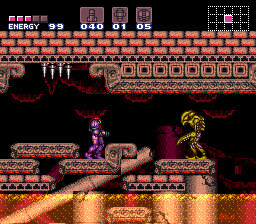 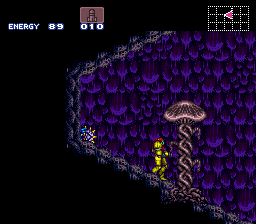 )
89% in 3:47
Read More
Thought that the main gimmick of this hack was quite amusing. There's nothing mind-blowingly new in this hack, per se, but it has just a bit more novelty than its description lets on.

If you don't go in expecting a masterpiece, you'll come out quite pleased having experienced a rather well-made vanilla-esque half-hack.

very nice hack, world feels lorge because many rooms are very tall or wide, often in the opposite way the corresponding vanilla room is, so it has a touch of Rotation feel which is cool.

went back in after completing to try for hundo. so far: 83%

cool sequence breaks are possible. my playthrough was not vanilla boss order
By KPF on Nov 08, 2022 (

)
No completion stats.
Read More
No. FUCK no. Just another bullshit ass hack that's too frustrating to figure out where to go next.
By yuriks on Nov 08, 2022 (

Good hack, and a very interesting take on a "Vanilla++". Despite being entirely based on vanilla rooms, the layout did not at all feel like vanilla, and a lot of the rooms came across more as homages to the originals, with some fun and amusing twists, while others only barely resembled the originals other than tileset/enemy selections. Good vanilla-style tiling and polish throughout.

I was never able to get a good sense of the "flow" of the hack, which left me feeling like I was just involuntarily stumbling upon new rooms without really having any agency of where I was going. There were several rooms that felt overly big, and some detours that were quite long but didn't seem to have very good rewards at end. While there are several points where the map loops around to earlier areas, the length of these loops and the complexity of the larger rooms made it time consuming to revisit some sections. End result of all these is that I usually felt discouraged from going back for items or branches that I had missed during my first time exploring.

I also found the difficulty to actually be somewhat harder than vanilla. This owes mostly to the stinginess with e-tanks early on, and several very unforgiving rising acid rooms later on. Many rooms also felt kinda unfair forcing you to either do blind drops in very tall rooms or climb up with offscreen enemies swooping down on you from where you can't really see them first. I think I only died once, but I found myself on the verge of death often, and I consider myself a decent SM player.

)
82% in 3:40
Read More
An aptly named hack, this is a solid rethink to the Zebes floor plan. Rooms will cleverly remind you of their vanilla counterparts but play very differently. I liked the general structure of the progression, I won't say anything specific about it, except that I wasted some time based on my own assumptions. I feared a great deal of backtracking was going to happen if I didn't find certain things but that wasn't the case, once I got over my flawed expectations there was always a path forward.

The motif of layout changes made for some good and some bad rooms. Familiar certainly highlights just how many long horizontal rooms there were to edit. Kudos to making them feel unique, but man Samus' legs are tired after all that climbing.

Map layout was very sprawling, and I wish that there were more intertwining pathways or branches to make certain pathways less linear. This might be a difficult ask given the way Familiar specifically goes about its redesign, but it was noticeable.

The feature noted in the credits was very cool to see. I'm impressed by the effort put in to show off what I'm sure many hack players will be trying to figure out themselves, it's always great when that's possible.
By Sickwood on Nov 09, 2022 (

)
91% in 4:19
Read More
I can't understate how much fun I had playing this one and to me Familiar is the best pure Vanilla hack since Reimagined in 2016. I was fairly entertained until I found a very early sequence break that peaked my interest to find more and put together the oddest route I could find. From there the freedom of movement combined with the very clever Vanilla room blending and layout had me hooked the rest of the time. Hidden secrets were certainly plentiful to the point I was scratching my head looking for the final 9% before ultimately deciding to finish, but will revisit this one again soon for cleanup. The 3D Chozo statue hologram thingy in Maridia was a pretty cool random effect. Overall, another great effort by one of the rising hacking stars. Thanks for the hack.
By MetroidNerd#9001 on Nov 14, 2022 (

)
55% in 2:04
Read More
This hack definitely feels familiar, but usually not in the best way. I am a fan of a lot of vanilla-esque hacks, though, so I gave it a shot. The most accurate way I can describe this hack is a demented version of Rotation. The description is right that you can usually tell what room something was built from, but they're often rotated 90 degrees in a way that doesn't work.

The tiling in this hack is mediocre at best and poor at worst. It usually gets the job done, but it's nothing eye-popping. The level design in this hack is bizarre at times, mediocre at other times, and downright irritating at other times. The worst offenders were the unnecessarily prevalent rising liquid (of any kind) rooms. That alone marred my experience of this hack enough to give it a 2 instead of a 3.

If you also really like vanilla hacks, you'll probably enjoy this one, but otherwise, you don't really need to play this hack.
By Rennew on Dec 03, 2022 (

)
86% in 3:16
Read More
(Played version 1.6) Should have called this one Super Metroid: Verticality. Seemingly inspired by a Rotation hack, this hack features plenty of rooms that are mostly the same as Vanilla except worked into a space rotated left 90 degrees. If Tundain was Japanese, I expect this hack would have been called Super Metroid Jumping instead. Aside from those jokes though, this hack is way more worth your time than a typical Rotation. Fresh and not too difficult, you will have good fun scaling Zebes' many platforms, especially to get away from the rising liquids. There are so many rising liquid threat rooms in here that it's almost a meme. I can't agree with KPF's evaluation here because all major items were easily found with enough clever exploration (you may be lacking E-tanks on your first go-round the planet though, so be careful!) even if some were found outside their natural area. Overall? Tundain hits another slammer out of the park. Play it today.
By Digital_Mantra on Dec 13, 2022 (

)
100% in 6:46
Read More
While it looks and plays like a dated hack, that's not what this one is about. It's about the title, Familiar. Each room is crafted to look like it's original room, just not in shape and size. This makes for an experience that is both familiar and unfamiliar, like a version of Super Metroid from a parallel dimension. In some instances once I knew which room was being portrayed I also knew this room was going to have a hidden morph tunnel or a pack of missiles, or a hidden etank in the ceiling. The concept itself is wonderfully preserved in these new rooms based on old rooms. Highly recommended for players that want to experience Super Metroid vanilla in a familiar way.
By Zincoshine on Dec 23, 2022 (

)
79% in 4:32
Read More
This hack is basically super Metroid nature, but better. It suffers from a countless number of small issues with most of those issues being related to taking damage from hazards that players can't reasonably see coming, such as damage when moving to an area the camera isn't scrolling to yet or when entering a new room. Crateria suffers from long boring shafts and tunnels and most the post crocomire norfair room layouts prior to reentering brinstar are janky and unrealistic. It also suffers from a lack of modern QoL improvements, particularly with the map.

All in all, this earns a recommendation and narrowly earns 4 orbs.

With the review aside, I have to comment on the absurd premise of this hack, that because of the existence of SMART old fashioned hacks will become rare and therefore this was made. It's an illogical and untrue premise, most hacks released will continue to be dated, and only a few good ones will use SMART. Furthermore, I am pretty sure that nearly all super Metroid hacks do not use SMART so SMILE hacks are definitely not rare.
By PHOSPHOTiDYL on Jan 20, 2023 (