Description
Samus, ever the fool, decided to jump down Ing Ing's pitfall trap during the escape, and was crushed by the falling pumpkin at the end of her quest to stop Imago from bringing eternal Christmas.

But what's this? Imago has returned??? And he's threatening to bring eternal Christmas again? Samus turns in her grave, and her soul is snapped back to reality so that she can prevent this disaster! Join her on a new mission throughout Spooky Isle and find a way to stop Imago's devious plan.

About Update 1.1:
This update brings several bug fixes, including softlocks and graphical errors.
Furthermore, the custom music has been updated to not randomly shut off for 5 - 10 second intervals.
Bosses have been balanced to make the fights less annoying.
There is a new visualisation of the main objective in the game to hopefully
make it clearer for newer players!

About Update 1.2:
This update brings several bug fixes, including softlocks and graphical errors.
There is a new visualisation of a system in-game that was less clear beforehand.
Minor room layout changes to accomedate for more skilled playthroughs. 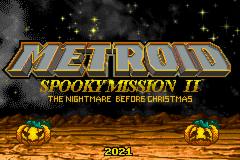 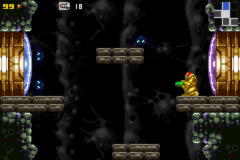 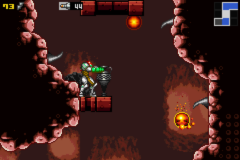 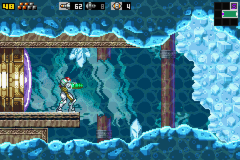 Ratings and Reviews
By FrenchLightningJohn on Oct 31, 2021 (

)
67% in 3:12
Read More
really great hack, had lot of fun playing it and exploring it, definitively recomand this hack, lot of spoopy creatures and enemies and boss, great music and level design can't say more 4.5 orb for sure.

time is not single segment IGT

)
100% in 5:28
Read More
I'll preface by saying I don't play gbatroid, but I was bored and decided to try this since I had played the first installment. I went into it spooky mission 2 thinking it would be a small halloween themed hack. This hack is massive. The regions felt fleshed out and fun to explore, backtracking was satisfying with the warp zone, there was lots of cool ideas scattered around, and the music fit the themes. I could tell a few hours into it that this was a labor of love by the people that made it. I'd go as far as to say it's a masterpiece in scope of how ambitious a halloween hack became, and I'd also say it's a solid contender for best Metroid game of 2021. Better than Dread.
By Cosmic on Nov 03, 2021 (

I didn't like 1.0 very much but patch 1.2a has fixed a lot of the issues that I had with the game previously, and I also noticed things that I didn't before.

+ It's chalk full of custom music!

+ The puzzles can be pretty genious at times, testing the player's knowledge of Zero Mission mechanics!

+ From minimal tiling errors to speak of, to use of an animated tileset in Boneyard, to a dedicated warp zone, a lot of care was taken in building the world of Spooky 2.

+ This hack taught me about some really cool engine tricks, like BG0 shenanigans with Chozodian save stations and room transitions, and stop enemy block weirdness. Very cool!

Additionally, with the patches, many of the issues I had have been fixed:

+ Tiling has been much improved

+ Music isn't switching as much anymore

+ Setpieces like the flame gate in express are more obvious now

+ The flames are much more obvious, using the animated map icons from vanilla

+ Enemies like Arachnus were made vulnerable to screw and speed, making for some fun shinesparking at the end

There's still a few nitpicks I have with the hack but they are design choices of Spooky Team more than anything else. Namely:

- I wish this hack had mid-air ballsparking. (without the hi-jump check) This would allow players to obtain items from ballspark puzzles without the need for spring ball, while still being a challenge.

- I feel there are too many dead-ends in this hack. This often made exploration feel slow and clumsy. I'd open the map, plan a route where I want to go, and then have to re-route as I realized there are dead ends. Areas where I struggled with this in particular include the Spider Nest and Glacier. IMO, these ought to at least be bypassable with screw or power bombs.

- With how huge this hack is, the 3x3 minimap no longer seems to cut it. Without frequent use of the world map, I'm often losing my way, even when I pre-plan where to go. Maybe one day we will get a 5x3 minimap?

- The placement of missile and super missile door caps felt often arbitrary. Some areas would have them before abilities, where others kind of just had them to...have...them...?

)
77% in 4:50
Read More
4.9 stars. I had high expectations from this team and the hack still turned out better than I expected. Customized Bosses and music, funny dialogs, a diverse and creatively designed map, and scary creatures work together in a barrage of halloween hijinks. Sure, there are a few minor changes that could be made, but I went nearly the whole game without noticing any that stood out. And I am 100% certain that these might get fixed eventually.
By makazuwr32 on Nov 05, 2021 (

Was able to get all items except 1 missing missile tank, 1 missing super missile tank and 2 missing e tanks - in total 96% items.

1. Awesome resprite of Boss before Imago and of and dethgeega.
2. i love that you included old spooky missionas separate area.
3. Awesome landing.
By SpookerK on Nov 05, 2021 (

)
94% in 4:43
Read More
I created an account just so I could rate this, that was the most fun I've had with a hack.
Speed booster puzzles are my thing and this had so many great ones that I would give it 5/5 for that alone, but the great overall level design, music(love that subtle tune in the Glacier music), and awesome graphical changes help too.
The extra touch of references to the previous hack is good stuff.
By Abslb on Nov 06, 2021 (

)
92% in 5:15
Read More
Easily the best and most complete Zero Mission hack. Phenomenal. Doesn't take itself seriously but it manages to be funny instead which is all good with me. This is the first Zero Mission hack I've played that gives the best Super Metroid hacks a run for their money. Thanks to the creators for a great hack.
By Catherine on Dec 31, 2021 (

)
97% in 4:07
Read More
Excellent hack! The largest ZM hack we've had to date, and it's a really interesting adventure. Lots of cool puzzles and rooms, music is great, not too difficult either. Highly recommend!
By Syphon on Mar 05, 2022 (

)
58% in 2:40
Read More
I had low expectations, but I can't really say anything good about this hack that hasn't already been said. It's one of the best hacks I've played, and definitely one of the best Zero Mission hacks out there. I think some may need a tip though, because I wish I did this: Accept the chaos of its design. Around every corner it feels like five new paths have opened up and you can only pick one. Anything that feels like a secret may actually be the right way, who knows, anything goes. It can feel overwhelming, but I just had to have faith that the map design was solid and wouldn't stray me wrong and send me into a purgatory of winding halls, and that faith was well rewarded with a wonderfully designed world, nail biting bosses, clever secrets, and anything else that convinces you to play this goofy (but spooky) hack.
By yohann on Jul 28, 2022 (

)
68% in 2:42
Read More
This is good, great level design, cool world design, cool musics, cool graphics.
I still feel like it's missing something but i can't really pinpoint what that is.
By LetsPlayNintendoITA on Jul 30, 2022 (

Read More
after playing the first one I expected to find gold and i found platinum. a very great sequel to the first. with so many fine touches. Great music, great graphics, great puns. A big community effort that I hope will get a 3rd game in the series this year!
By Zincoshine on Aug 13, 2022 (

)
85% in 7:20
Read More
With a name like "spooky mission" and a ridiculous excuse plot you don't have much expectations when going into this but it doesn't take long before you realize that you're playing a full scale metroidvania, one that exceeds the original game in the amount of available content and possibly even exceeds super metroid in terms of content. While plenty of massive metroidvanias have been made by modding metroid games, this is the first one I've encountered so far that is properly designed to be a Metroidvania. Actually, it isn't just properly designed, it is perfectly designed. This is something that should cost money honestly. It's better than the vast majority of metroidvanias that have come out on steam this year. While it is not the best mod I've ever played it is the best one that isn't a quick play. Having said all of this, the mod is not without its flaws as I did encounter an out of map exploit at the end in the glacial area. Also, ridley is hidden behind a secret passage in a tiny very rare case of bad level design. This mod is rated as "veteran". However, it is not like most other older mods that were rated as veteran purely due to terrible level design. This mod is actually veteran in the sense that it is hard and challenging like hollow knight or blasphemous. The secrets act as a good way of training the player to use advanced techniques.

All in all, this is one of the highest-rated mods and the content and quality matches the rating. Is it the best metroid mod ever made? That is not known yet as there is still plenty of stuff to play but this definitely has the potential to be the magnum opus of metroidconstruction. Just make sure you play this after you've played some other zero mission mods first. It's a tough one and the mod is clearly designed for those with prior experience playing mods. There is no shortage of good zero mission mods to play before this....

)
69% in 3:38
Read More
Did I really forget to review this? Well, whatever, better late than never. It's approximately three times better and larger than its predecessor, and while it predictably steals Fusion bosses like other ZM hacks around here it doesn't hide items in stupid places and you're much less likely to get killed or stuck for wandering into a new area without the correct items. (I vaguely remember getting lost in a water-filled ice area when you're supposed to have gravity but the area was fully escapable with enough walljumping.) The progression isn't noobproof, because my brother had a fun time running into Serris before finding Charge Beam, and it's completely possible to do that because the boss who normally drops Charge Beam does not actually drop it but instead opens the way to it when defeated, but that's about the limit for dumb design I found in here. Definitely worth a playthrough if you like ZM hacks.
By RX-78-2 on Jan 29, 2023 (

)
100% in 2:56
Read More
I like the first spooky mission hack but I like this one more, it just has more to offer (bigger maps, more secrets and puzzles, and more exploration) than it's predecessor but that's just my opinion.. it was a very fun hack to play and I'd definitely play through it again