Description
It’s Retroid. Play NEStroid on Super Metroid without annoying physics and controls and whatnot. 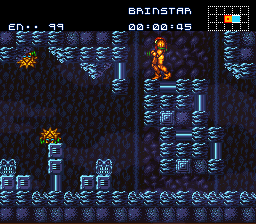 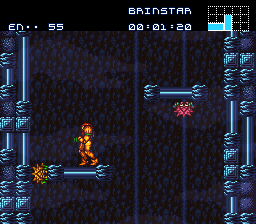 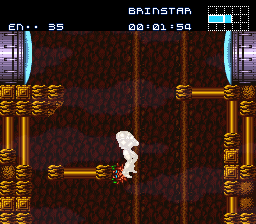 )
32% in 1:08
Read More
A great remake of the first game, got stuck underneath the Tourian bridge even after beating both bosses, but nevertheless it was great.

I loved that it included the original "save" system NEStroid had.
By Sapphron on Jul 25, 2020 (

)
33% in 0:58
Read More
Not very faithful to NEStroid, sadly.
It keeps most of the basic room design but it's VERY linear unless you bomb jump everywhere which...would kinda suck.
Ridley is SM Ridley and Kraid is NEStroid Kraid, Botwoon and BT are thrown in there for some spice. Item progression isn't the same as usual. Some extra shortcuts and some rooms were cut out (I think). If you wanna play NEStroid in SM, this is the closest we'll get for a very long time.
By Fercho on Aug 03, 2020 (

)
34% in 1:34
Read More
It's very well done and it stays rather faithful but with a couple twists. There's some minor gripes to be had but overall it was a great experience. Some platforming felt cramped, a Kraid statue is used instead of a Ridley one in a couple places, the old ice beam location is annoying, the ending should be tweaked, and there was a couple graphical issues, and the Crateria map reset on me after going to Kraid. These were all very minor issues all in all for a hack that was very well done. A 5 is a little generous but there's no option for a 4.5 and I feel this hack is underrated.
By albert v. on Jun 11, 2021 (

)
No completion stats.
Read More
It's a fun way to replay NEStroid (or play it at all), and I liked some of the new additions to the game, but I had some gripes. The statue in Norfair that only opens up after you kill Ridley...looks like Kraid. It took me too long to figure out what was going on. I also think this hack lost its identity. Half of it is a faithful recreation but in Super Metroid, and the other half is Super Metroid but haphazardly based on NEStroid. So for example, the Kraid fight is a clever retool of mini-Kraid done in a way where it feels like all his mechanics from the original are in the battle, but Ridley is just Ridley, and because there's no gravity or plasma, he's way too hard. That'd be fine on its own, but Ridley isn't that hard in NEStroid so it feels like he was just lazily slapped into a room. He doesn't even function properly in the new room. The game at times is made harder to compensate for the fact that it's in SM, but that kind of defeats the purpose of putting NEStroid in SM for people to have a better experience. It's a mess. It is fairly short so it's not a deal breaker, but given it's already working off of NEStroid's design, I'm more critical with my nitpicks.
By SpookerK on Nov 19, 2021 (

)
No completion stats.
Read More
Honestly I was quite disappointed in this one. I deliberately held off playing it for a long time just to have a nostalgic experience one day. I was expecting a near replica of NEStroid map and it wasn't even close. I strongly preferred JAM's incomplete hack that was a perfect re-creation tile and level design wise. I also didn't like the modified mechanics. If I wanted to play pseudo-M1 mechanics, I'd play an M1 hack. Lastly the mashup of bosses with crappy mechanics was not fun. Makes me really wish JAM had just finished his version. I just think it would have been really cool to tear through the true original map that I've been playing since 1987 using the full SM engine. On a positive note; the palettes, tiles, and other touches did look nice.
By Zhs2 on Feb 16, 2022 (

)
33% in 1:46
Read More
Pretty good recreation of Metroid in Super Metroid's engine. It takes some liberties but tries to match original Metroid as closely as possible, and as a result it can be just as anticlimactic as the original. That said there's absolutely nothing wrong with this middle-of-the-road hack, even if I do have to echo the above criticism of there not being a Ridley statue to go with the Kraid statue. It's a chill and much easier equivalent to playing actual Metroid that'll occupy ~90 minutes, not much else to complain about.
By RealRed on Feb 18, 2022 (

)
57% in 1:23
Read More
it's the closest you'll get to M1 in SM. to be honest, it's pretty fun. there are a few deviations from metroid, but the enemy halls are well intact, and you won't get trashed as hard. also, the forum has some hilarious reading material with some balding individual losing his marbles over my appreciation for the hack. pretty good stuff overall