Description
So it is Digital Cube, widely influenced by movies Cube/Hypercube/Cube Zero
For people who doesn't saw this movies (first is excellent, second less great, and third clearly crap, so I recommand the first) Some people wake up trapped in a giant cube with multiples cubic rooms, with different color and numbers. Some rooms are deadly traps, like acids, spikes, sound pressure, etc...

This hack is based one the same concept : 49 pain-in-arse square rooms. Good Luck to exit !

STORYLINE : Samus participate to a virtual project simulating a trapped cube, involving ability to fight, to orientate and memorize.

Clues/Rules :
- Each linked rooms together can't be have the same color
- If you use savestates, use it with caution, be sure you're in a SAFE room
- Some important items are sometimes in deadly rooms. Remember, you can avoid a deadly trap if you be equipped with the right item to exit it (example a trapped yellow room will need power bombs) 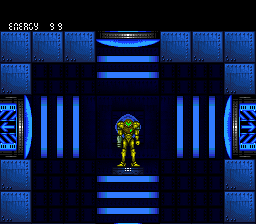 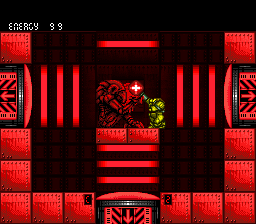 )
42% in 0:30
Read More
Digital Cube is a curious case. For one, there are traps that will kill you, and no save stations at all. However due to the nature of it, that doesn't become too much of an annoyance. That being said, unless you like trying to figure out a puzzle that involves a lot of restarting from the beginning, this is not something you will want to play. Otherwise, it is a pretty solid and unique hack.
By Mon732 on Apr 04, 2015 (

)
No completion stats.
Read More
I like this. Why?
Digital Cube requires you to either remember the correct route or make a map, this give it a puzzle element while still giving the feeling of exploration.
Sure the traps will kill you but that's part of the fun! .D

)
No completion stats.
Read More
Very good mini hack consisting of just a few rooms that are more puzzle based. Finding the right path is harder then it sounds, especially when there is traps that insta kill you.
By CrAzY on Jun 07, 2015 (

Rating for some hacks may be off by 1 Star, but arguably not more, and ratings are not attempted to be provided within the precision of ''half orbs''.
By Pixel_Tiger on Jun 26, 2017 (

)
45% in 0:51
Read More
Funny little hack you can play if you want a time out from BIG hacks :). Liked it and got almost all items except 1 missile and super pack.

)
43% in 0:19
Read More
A nice little hack, very nice idea, many traps, and a way through.
I had fun drawing a map and taking notes, while dying multiple times and starting all over.
if you wanna play this hack, you need some capacity for frustration, but getting finally through gives you the rewarding feeling of victory.
By Ri2nOneRok on May 31, 2018 (

)
42% in 0:00
Read More
Very tough hack. You will die. Do not forget that. The redesign of the items collected is quite memorable and very well thought out. The soundtrack selection fits very well with the concept of cubed. This is one of the most clever and unique hacks out there. While not a conventional exploration hack or outside the box (pun intended), nor is it very easy, it is definitely worth a play if you are up for the challenge. Brilliant concept
By Croakomire on Dec 11, 2018 (

)
No completion stats.
Read More
Fun stuff, the lack of saves increases my liking for it only because of the nature of the hack, remember the route or die trying, it's a game of trial and error. There are a few bugs I ran into such as going to "grapple heaven" when entering a door and all the screens had a heart attack, other than that, solid hack.
By SuperMetroidSamus on Jun 15, 2019 (

)
No completion stats.
Read More
it's nice, only thing is that i got really annoyed by the fact that i come so far, screw attack without ice beam and i savestate there so i HAVE to start from the beginning.
By Sapphron on Jul 16, 2019 (

)
44% in 0:12
Read More
This hack took me 4 hours and 28 deaths.
Playing Digital Cube without savestates and going for 100% (aka 47%)is going to frustrate you. A lot.
A certain grapple puzzle to get a rocket forces you inside a wall, forcing you to reset which is like 15 minutes into the game. Some door transitions (when entered in spring ball jump) put you too high, setting you inside a solid block that you can't escape from again, stucking you.
The trial and error aspects were kind of stupid imo, it's such a linear path but at least it forces you to think where your next objective is.
This hack is really good if you play it with savestates. If going for 100% without, don't even bother. You'll be quite frustrated by that one puzzle and end up resetting 4 times like I did.
By darkrid12 on Jan 03, 2020 (

)
47% in 0:50
Read More
I really enjoyed this hack, took me about 2-3 hours, wasn't keeping track of RTA this time. Took about... 10 deaths before I started using save states realizing that there were no saves. Only had an issue with the grapple block putting me in the floor causing a softlock. Went for and achieved 100% with save states. Probably died 29 times, but enjoyed the ending fight and route to get there. Well done!
By benox50 on Feb 01, 2020 (

)
No completion stats.
Read More
Sadly you will need to use savestates to enjoy that one because of the concept, but apart from that its an amazing concept.
Really original, well based on cube movie (Im one that actually watched the movie and enjoyed it mostly for the concept again).
Still really unique hack, concept is well executed, every rooms feel like a mystery to uncover, you feel traped, lost and toyed around by unknown forces.
I really love that you set rules like the doors color and each rooms beeing a 1x1, really unique hack.
By Elminister on Jul 30, 2020 (

)
47% in 0:54
Read More
As many have said above, this romhack is one of the best.
It has a clear concept that is wonderfully implemented through the mechanics of Super Metroid.

You can play this quicker with save states, but I found it quite fun and challenge to map out the cube by hand and try to find the right path out in one try. It's much harder but much more rewarding - I recommend it!


--very minor spoiler / advice warning--
Two pieces of feedback for the creator/advice for the player:


a) The only room with a name in the hack is a little misleading, I believe a (?) could help new players not give up and reset. I'd call it "Infinite Room?"

b) Once you find how to deal with "Infinite Room?" do not go back the way you came - it glitched my game and soft-locked me - no fun. I assume it's too hard to fix directly so making that path one-way would be an easy fix to prevent encountering the glitch.
By Kremit44 on Dec 11, 2020 (

)
44% in 0:38
Read More
It's interesting and it's exactly what it wants to be but it's also not that fun at times. My main gripe is that guessing the right door just doesn't feel very rewarding even when you are lucky enough to be right. This makes death feel cheap. I also found the solution to the infinite room extremely cryptic/random as I have no idea why the game let me past.

I wish the author would do something cool like give an accompanying quiz or puzzle one would have to correctly solve so that choosing the right room wouldn't come down to chance. I've done some corn mazes with my family as a kid and the way they made those fun was by rewarding you with the correct path by getting the answer right. I suspect I would have given this hack a 5 if I was given the chance to make informed decisions.

Some will like it a lot but I suspect many will also be like me, folks who respect the hack but found it more annoying to figure out than fun. It's so well put together I can see why one would could give it a 5 given the excellent presentation but I feel the fun factor could be much higher.
Thanks to the creator for a well put together hack, even if it wasn't completely my cup of tea.