Description
This hack is about as non-linear as they come (if I'm correct) and it has the same amount of final items as the original. The difficulty of this hack is kinda on the low end, so if you want more of a challenge let me know, I might make a harder version. This is my first hack so tell me what you think!

NOTE: official version has 2 items share an index, unintentionally making the max 99% items. The unofficial patch fixes this and makes no other changes. 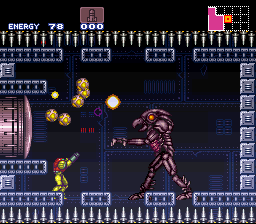 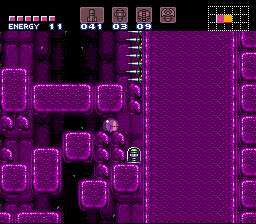 )
37% in 0:25
Read More
A very short, non-linear hack. Item everywhere, lots of places to explore. Has quite a bit of palette changes, but other than those, it is very vanilla like. Good hack to play to kill some time and is very fun to run through again and again to try and get the best route and time when speedrunning.
By Elminster on Apr 19, 2015 (

)
No completion stats.
Read More
I found this hack really underwhelming. A shortened, watered-down, easier take on the original game. Some of the palettes were nice, but I found too many of the rooms to be reminiscent of the original game, and the ones that weren't were uninteresting. Most of the save station icons on the map are not actually save stations, and there is something later in the hack that looks like a save station but is not, which was very annoying to find at low energy. Items are too abundantly easy to find, and one expansion can be found early in a very odd place; not sure if that was intended or an oversight, but it creates an unpolished feel. The escape felt discontinuous and the player can easily be led in the completely wrong direction with too little time allotted.

I don't recommend it, but the hack is easy and short, so you have little to lose if you choose to play it. I will say the room Ice is in is really neat.

)
No completion stats.
Read More
This is a neat hack. I would recommend this to someone who has never played a SM hack before. The hack is pretty short and isn't too difficult. The level design could help a newcomer recognize the kinds of things are suspicious and should be explored without being too challenging. Some things are more obvious than others, but any player should be able to find plenty of items.

There are a few errors, some are a bigger deal than others. One error in Tourian caused me to get stuck in a wall while in morph ball and I had to reset the game.

The room that ice beam is in is my favorite room in the hack, very cool idea.

)
90% in 0:02
Read More
Alright, this being your first hack, it was quite good. I liked how you tried to put a personal touch to it. But I think it might be a bit to much calling it a hack for beginners as there are no save stations! Using savestats is one option but you might abuse it to some extend where the fun gets lost.

And i dont know about the other guys out there but I think your escape route and the time are a bit CLOSE, I got stuck on a few tiles on my way and it was very.. VERY close to blowing up (like 3 seconds remaining). You might want to give a bit more time, especialy for beginners!

)
81% in 0:02
Read More
This was quite a fun experience, but at the same time the world, in the early game, felt like it wasn't designed to be smoothly played. I'd find one item and then have to look around the whole map to find the next.

This was made much worse by the fact that I didn't know where to go at a certain point and checked every single room that I had access to like twice - turns out, there are three super missile blocks that are very easy to miss in the floor of one room which are the only way to enter a huge part of the hack. I spent a very large chunk this time here - at least an hour - just looking for those stupid blocks.

As a result of this, I had ended up beating Phantoon before going into the Norfair area at all, which I feel like was probably not intentional. However, it was extremely fun to go through early Norfair with gravity suit and wave beam and just destroy everything :)

Anyway, after I found those super missile blocks, the hack actually became like 10 times better. That was my favorite part of the hack, and after that there wasn't really a huge problem with knowing where to go. The ice beam room was AWESOME, but I wish the idea had been used more to it's full potential.

As a whole, well done. It's a bit rough around the edges, but if you give this hack some time, it redeems itself in my opinion once you get past a certain point. I'd recommend it.

(also there's almost no save stations, which is bad. Savestates are pretty much mandatory unless you like replaying extremely long sections upon death.)
By PassivePac-Man on Feb 19, 2018 (

)
85% in 1:18
Read More
This was an alright hack for being so dang old. I really didn't like that there were items in Tourian & the escape. For people going for 100%, that's always really obnoxious.
Palettes were kind of nice, progression wasn't that confusing and some areas were quite nice to look at.
Also, no save stations, the ship is your only save. This gets a star knocked off because it can take quite a while to get back to Mother Brain if you die.
By Paragon on Dec 01, 2020 (

Read More
Fun little hack! Graphics are a little funny in some areas, but there are many different ways you can go through it and it's legitimately fun to play. Item hunting wasn't a chore, but there were a few I couldn't figure out. Escape is pretty narrow.. honestly surprised I survived the first time with milliseconds left.

Definitely a hack to play, especially for people new to hacks.
By LetsPlayNintendoITA on Sep 04, 2021 (

)
100% in 1:38
Read More
Another great hack that caught my eyes and was very cool.
Just a few mistakes (morphball room having weird background on re-entering it, the ending getting normal music, and some rooms having boss music even if they weren't there) it was a very very good hack. 5 stars. 100% in 1:38. thanks!
(played the fixed version)
By Tundain on Jun 05, 2022 (

)
78% in 1:40
Read More
Very strange tiny hack, a lot of item pickups pretty much anywhere.
I did waste a lot of item early on because a progression point wasn't really clear to me (but that's just me not paying enough attention)
Other than that, there's not really a lot to say, good hack.