Description
This was a hack found on the Japanese Super Metroid wiki.
Hidden is a full hack posted on 21st Jan, 2018, by the same guy who created Falling. The final version contains some changes/fixes by Sapphron.

I will post a hack after a long time.

This time, basically, it is only change of the terrain and item arrangement that can be done with Smile, and there is no change of behavior or program.
If it is about killing time.

You don't need to use a technique such as clearing a wall.
I think round dashes are required for 100% items.

The resistance and endurance of some enemies and bosses have changed, but
As I did for my first film, I stopped doing it.
After all it will be just work ... 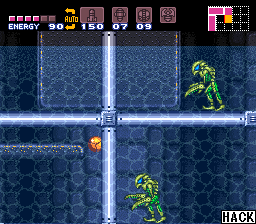 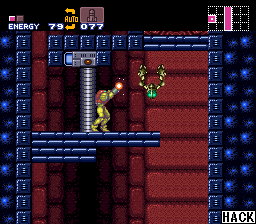 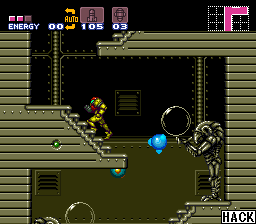 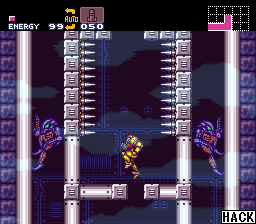 )
97% in 4:52
Read More
This was pretty good. The progression paths will confuse you plenty at some parts and most of the tiling is atrocious (mostly fixed in my patch), but it has some really nice ideas and good gameplay.
By caauyjdp on May 11, 2019 (

)
96% in 8:40
Read More
Good hack. Found two oob, and map doesn't save properly, but it didn't bother me too much. Fixed in final.
Liked what this hack does with torizo and ridley fights, and that enemy vulnerabilities were tweaked.

)
90% in 4:45
Read More
This was a hack I really enjoyed. It's also vanilla which I absolutely don't have a problem with, as it gives me that feeling
like I'm playing back in 2007 when I discovered Rom Hacks. It also reminds me of Super Metroid Legacy which once again isn't a bad thing.

It does have some problems like tiling errors and square level design, the map doesn't show where you are sometimes due to
how big the maps are, and forcing you to fight Draygon with those turrets constantly shooting you is always a huge pain.

I can recommend this hack to those who have already played a few hacks here as it does have a slightly higher difficulty
than the original. All in all, I really had fun with this one. I say if your like me who enjoys Vanilla hacks like this, go for it, you won't regret it!
By JamieWebb16 on Jul 08, 2019 (

)
89% in 4:48
Read More
I didn't think I was gonna like this hack all that much, but after beating it I actually really like this one. Reminds me of the time when I first started playing SM hacks, however it isn't perfect though, there were a few things I felt that could've been better like some rooms in wrecked ship could've have better tiling, unable to view the whole norfair map when I needed to. Can definitely recommend this one, but only to those who like slightly harder hacks.
By hayen on Oct 24, 2019 (

)
91% in 4:53
Read More
Solid vanilla-style hack with interesting item and path progression. Things are well hidden (hence the name of the hack) and often not where you expect them to be.
Like another user mentioned, it feels very old-school and reminds you of old-school hacks like Super Metroid Legacy.

Space Jump and Plasma Beam are missable items which is odd as usually major items are displayed on the map. I never found them. I saw unexplored parts on Tourian's map but never got there. I guess there were some secrets.

For some reason what I guess was supposed to be the acid-lowering Chozo statue in Lower Norfair didn't work for me unless I missed something. Edit: Found out it's because I didn't have Space Jump. Had to take an acid bath.

Lower Norfair's map not being viewable was slightly annoying.

Missile doors taking 10 missiles to open for some reason is a bit annoying at the start but the game throws missile expansions at you so it becomes a non-issue very fast.

Difficulty is a bit higher than vanilla.

All in all this is definitely a well-made hack. It isn't groundbreaking but if you're in the mood for a vanilla-style hack this is worth playing.
By PHOSPHOTiDYL on Jan 07, 2020 (

)
96% in 5:20
Read More
Solid and accessible this is a cohesive and quality hack. It's not the most imaginative or incredibly well designed but it's fun and fair. Progression is hidden throughout, hence the name i'd imagine lol, but tells are fair and items are fun to collect. Backtracking doesn't ever feel too inconvenient. Crateria and Wrecked Ship are straight forward but fun. Brinstar is convenient to travel within and provides a quick connection between all areas. Norfair is a sprawling map that you venture deeper and deeper into, so deep it's off the map. lol. Tourian was tweaked in a fun and reasonable manner. This hack did nothing spectacular but everything right, thanks to the author and all who helped.
By therealsusan on May 06, 2021 (

)
83% in 6:03
Read More
I spent maybe 20 minutes (including using fast forward) watching geemers traverse walls, looking for notches in the wall while hunting bombs... Did lead me to a few missiles, but I ultimately had to look up where to find bombs.

Afterwards, I felt a little dumb & from there on I had a better understanding of the author's style... Ultimately I can't fault a hack called Hidden for hiding things really well.
By Pixel_Tiger on Jun 14, 2021 (

)
97% in 5:47
Read More
Very nice hack with very interesting room layout. Can recommend even to less-experienced players as no techs are required to beat this hack other than what the base game taught you.