Description
de·pen·dence
n.
3. The state of being determined, influenced, or controlled by something else.
4. A compulsive or chronic need; an addiction

Super Metroid: Dependence is a full level design/layout hack, focusing more specifically on individual room design. It's a bit more non-linear than some previous hacks, and maybe even more so than the original Super Metroid. Whether that's good or bad is up to you.

Since there are very few save points in the game, I'd advise save state use. And unlike some of the other Super Metroid hacks, there are map machines around. However, if you use them, beware the icons on the map, they're incorrect. If I had enough hex expertise to change them, I would have. The map itself is correct though, although like in the original Super Metroid, it conceals more than it tells.

The following are some random things I think you should know about the game before beginning, although if you're strictly hardcore and you want to figure out absolutely everything at the cost of maybe a bit more trouble, then you can skip the rest.

There are a couple of different branches you can go off on depending on which order you want to face different bosses in, and thus you can also make the game easier or much harder by following diverging paths. If you find the path you're going down seems a bit too hard for the level of equipment you have at the time, try experimenting and looking for different ways in other sections of the planet.

If you go to the Wrecked Ship with only 2 energy tanks or less, and it's very possible that you may do so, then heaven help you, for you will not be prepared for what will await you there. Unless you're very good at fighting Phantoon.

Also, the spring ball is now a required item. If you can beat the game without it, congratulations, you're probably superhuman. But I'm pretty sure it's required.

There are also a few sequence breaking opportunities in the game. To give you an idea: With some decent ingenuity, 2 b 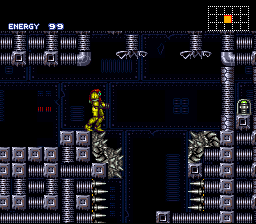 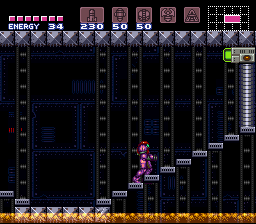 )
87% in 5:27
Read More
I wanted to say this hack was kind of cool and did some neat things, but... it didn't. It's an old grandpappy decade-charged fart of a hack made of terrible tiling and even more terrible design decisions. It's alright if you love rooms with like 8/5000 tiles made of shot blocks that you need to shoot to proceed and fun grappling sequences, I guess. In summary, Black Telomeres would get fired really quickly if he was a building architect.
By Aran;Jaeger on Dec 08, 2016 (

)
100% in 2:13
Read More
Not a good hack, but not terrible either. There is a severe lack of Save Stations in the game, there are some questionable design choices (such as the spikes in some rooms in ProtoTourian (this hack's version of Maridia) and the possibility of getting stuck in the escape sequence). I do not recommend playing this on console.

)
97% in 8:55
Read More
Spent about 13 hours on this.
Hack starts with 60 damage spikes(fact that you could have found an etank before that doesn't matter). It doesn't get better. It has some neat moments. Red crateria norfair is one. Boss rooms are... memorable?
Hack likes to hide progression path sometimes. It loves one way passaegs that make you backtrack through couple other areas to get back to where you just were.
Not enough save stations.
It seems like escape is really trollish, but maybe I just haven't found "correct" path.
One item requires clipping through blocks(twice) as far as I can tell.
Avoid.