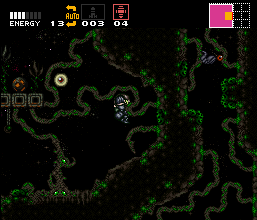 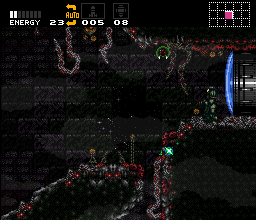 Rating for some hacks may be off by 1 Star, but arguably not more, and ratings are not attempted to be provided within the precision of ''half orbs''.
By Zexis on Aug 17, 2017 (

)
47% in 1:31
Read More
Wow...
Very good palettes. Good enemy resprites and good hidden items.
Bombs are OP and the rest of the items suck, basically. The changed physics honestly ruined the experience for me, because when you turn around sometimes you get launched in a direction. WHY?!?!?!
Also the atomic-like things (I forget their names, they follow you)do WAY too much damage and they respawn. Makes no sense. That entire room is a shitfest.
A certain super pack is hidden behind an unhinted grapple block, and X-Ray is almost useless. The visor extends about a few pixels tall. That's it.
Overall, I don't actually recommend this hack. It was frustrating in the beginning and towards the end, I didn't like it.
Finished.
By caauyjdp on Mar 07, 2021 (

)
34% in 1:28
Read More
Another hack that I can't decide if it's a 2 or 4 orbs.
It's visually interesting.
Morph related changes are annoying at first, but hack is fairly short so they don't have time to annoy you much.
Bunch of "quality of life" changes/tweaks which are interesting to see in an old hack.
Some enemies deal a lot of damage, but ship save is never/rarely too far away.

What bothers me the about this hack, is the "random" placement of items. There can be a lot of items placed on same screen with little or no hints. Even just bombing every tile isn't enough here, because hack doesn't use/show vanilla super block gfx. You'll have to bomb every tile and shoot everything with wave to find things, and apparently I wasn't doing that enough.

Interesting, somewhat small/short, but likely not for easily frustrated.
By Fercho on Mar 14, 2021 (

)
36% in 1:59
Read More
The physics changed in this hack are really really really annoying. Some rooms are so frustrating that I almost quit. It's a terrible experience for me. Really don't like this hack. Although the palettes are pretty good.
By Aikner on Sep 13, 2021 (

)
47% in 3:13
Read More
A sometimes a bit tedious, but overall creative hack with a captivating dark atmosphere. The changed physics were a nice touch.