Description
The Space Pirates have leaked a deadly virus on the minor planet Dysnomia, Samus must recover 5 artifacts and put an end to their reckless schemes. Her suit has been outfitted to withstand and protect her from the virus that has begun to mutate organisms on the planet as well as the space pirates themselves. Watch out Samus, the pirates have been experimenting with antigravity technology. Be careful!

This hack was created for the Oats n Goats contest

In this hack:
A completely new planet and spaceship to explore with a never-before-seen tileset.
5 Keys to collect
A Brand New OST
(OST is up on YT, linked below)
Merry Christmas Hackers!


-=V1.05=-
Changes:
-A few level design changes that fix slope errors and better direct the player
-The Phytor pre-spospo save bug has been fixed

-=V1.07=-
Changes:
Save Station Fix (for real)
players can no longer short charge shinespark into Hydracon
fixed some frozen enemies
updated a few enemy palettes
fixed some slope errors
Fixed a map error where an item dot was in the wrong position
removed Herobrine 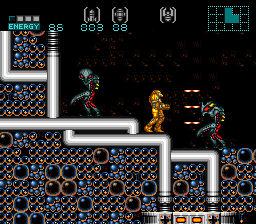 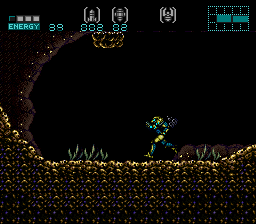 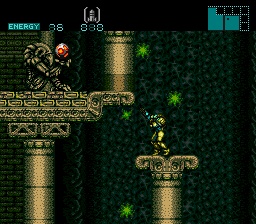 )
66% in 3:20
Read More
nice graphics and music. the world is pretty open and interesting to explore. when i died in sporespawn area once, it teleported me to a new water area. I'm not sure if it's intended or not, but it didn't affect my playthrough at all. after getting space jump and screw attack, the game became a little less challenging to me. i collected all the items on the map that the map station showed to me, but collection rate was only 66%? i got all the major items except xray, and 14 Etanks 110 missiles 25 Supers 25 powerbombs. BTW, when i reloaded at the final area save station, the graphics in the room was broken.
By Zhs2 on Dec 31, 2021 (

)
60% in 2:32
Read More
Soy tier "every patch from project base without actually being project base" "all CRE stolen from Hyper" "player graphics stolen from Opposition" hack. 70% of it is CRE hell and the developer ENCOURAGES you to stay in CRE hell by placing just about every major upgrade save beams, bombs, hj, space jump, and screw attack in CRE hell. The other 30% of it is not visually appealing either, attempts to be more than SM yet still fall flat at escaping sameness. There are also lots of blank room segments that appear past scrolls the dev didn't bother to fill in, likely because he didn't expect the camera to scroll that far. One door in Phytor Ruins when entered from the left takes you to a higher door on exit. Overall not a very difficult hack and okay on fun factor, but it definitely needed polish. And the music is kinda catchy, but nothing special.
By Sickwood on Jan 01, 2022 (

)
No completion stats.
Read More
This was a fun hack. The first area gave me vibes of a space aged Darkholme Hospital with undertones of SZM pirate ship. Flying through those rooms with speed booster tech with catchy custom music in the background was a blast. The hack's openness leads to some interesting item progression depending on your route and good replayability. The bottom areas seemed heavily Hyper and Ancient Chozo inspired, also with good custom music that fit the areas' vibe. There were some bugs and slope errors, but didn't really detract from the experience for me at least. The only thing I didn't like was the end where after 99.9% of the hack being custom, you get dropped into a Vanilla room for a boss fight and it just ends with no escape. Obviously escapes are cliche, and there was no ship, so I dunno, maybe could have teleported from somewhere. But considering this was made in 6 months for a contest, is huge, had great custom graphics/HUD/ASM/music, QOL edits, I thought it was pretty darn good.
By Dynarec on Jan 01, 2022 (

)
No completion stats.
Read More
Great soundtrack. Unfortunately, I ran into a hard-lock due to a save-station bug. If you save at the lower station near Spore Spawn without picking up the High Jump Boots, then die, it respawns you in a different save station on the far left of the map near a watery area.

That results in a hard-lock because if you do not have high-jump, you cannot get out of the watery room that the save-station is connected to, while your save still points at that station.

)
61% in 2:32
Read More
Excellent aesthetics, interesting and unique music, cool mechanics, and a well designed world. I had a lot of fun. I liked how open it was and enjoyed the numerous design elements that allow it to stand out. I wish secret hunting was a little more robust, traversal less straight forward, and more emphasis around the unique mechanics in the game. The place to go use the Chozo keys could also be more clear IMO. The relative symmetry of the map had pro's, ease of exploration, and cons, lack of surprise, but was well done and unique enough to be welcome. Thanks to all who helped, this is a great hack.
By Sapphron on Feb 13, 2022 (

)
64% in 2:03
Read More
Quite good, if really repetitive at times.
Progression isn't quite too obvious but there are a lot of things that make up for it, like the excellent custom tracks and GFX use. Really liked this for its flaws, and especially since it was so large for something made in 6 months!
Finished.
Recommend.
By ocesse on Feb 20, 2022 (

)
64% in 3:07
Read More
To be a hack of a contest, it's big, it took me more than 3 hours to finish it and the truth is that those hours I played were fun. I liked his music and graphics, especially his music which is outstanding. The new anti-gravity mechanic isn't new to Super Metroid hacks, but turning Samus upside down is new, I don't know how they pulled that off, but it's technically impressive. I recommend this game because it is fun. Play it!
By Syphon on Feb 23, 2022 (

I wasn't a huge fan of the symmetry of the main area especially since it was all CRE which made going from one side to the other feel repetitive at times.
The other areas were fine and the music was great. I really liked that anti-gravity mechanic even if it was only used for a couple rooms.

I hit the save warp bug. I used IBJ to reach an underwater area (I didn't have gravity) and I got stuck. I was pretty mad at myself because I couldn't remember the last time I saved. When I reloaded I was in some water area. Thankfully I had springball so I used springball jumps to get out of that area and back to areas I should have been in. I thought maybe it was an antisoftlock measure because I wasn't sure if I had lost any progress. So for a while I wandered around thinking it was just a weird way of preventing people getting stuck the way I had.

Aside from that save warp, which ultimately wasn't that big of a deal, the only other frustration I had was that the map was hard for me to understand and navigate. I think the big rooms were sometimes a bit empty feeling due to a lack of enemies. However, I understand this hack was created in limited time by two people. They made a huge world and populating it fully probably just takes way more time than they had. That's pretty much it for things I could want changed.

Overall my experience was very positive. I think this is a good hack that I would recommend to people. I think speedruns of this hack could be a lot of fun, due to all the routing choices you could make. The upside down gimmick was interesting. I really struggled to control samus but it was fun to have a new gimmick in a hack other than "ruin vanilla physics".

I loved the custom music. I think that was my favorite thing. Finding the chozo keys was cool. The big locked gate that opens was epic.
By Exister on Apr 02, 2022 (

)
No completion stats.
Read More
Chad tier "movement improved with various patches" "custom gfx from various hacks and resources" "player graphics from Opposition with permission from Mccad" hack. The developer spreads out items throughout the whole hack encouraging dynamic exploration of the entire world. The whole thing looks either fine to very good, and has very clever usage of vanilla tiles with nice-looking recolors and pleasant tiling. There are also lots of blank room segments that appear past scrolls the dev didn't bother to fill in, likely because the dev was pressed on time and had to save on data in the rom. One door in Phytor Ruins when entered from the left takes you to a higher door on exit, but this is fixed in a later version. Overall not a difficult hack and very fun with impressive polish for such a big hack made in 6 months. And the music is very catchy, I've found myself listening to it at Mentlegen's Music, the creator's youtube channel. 5/5 definitely recommend.
By therealsusan on May 08, 2022 (

)
No completion stats.
Read More
Got soft locked with that save station glitch after a space pirate OHKOd me

Graphics and music looked good. Layout seemed pretty random... Really surprised I some how bee lined it to bombs.

Might try again another time, soft lock caused me to bail

)
64% in 1:48
Read More
There are a couple of unique features that stood out for me in this hack. One is the custom soundtrack, which is apparent within moments of starting the game. The other is the anti-gravity gimmick. Soundtrack will be a matter of personal taste as to whether it will be enjoyable but either way, the original compositions make for a unique atmosphere. The anti-gravity gimmick is restricted to a few rooms (understandably since it takes twice the effort to design spaces for two orientations) but isn't overly obtrusive and it's goofy and fun to play around with.

Rest of the gameplay is the familiar Super Metroid loop. Find items to open up new areas to reach more items and repeat until the end goal is complete. Resources and access felt restricted at first until Super Missiles are obtained. At which point, most of the rest of the map opens up and Samus' power level massively spikes. Then it becomes a matter of grabbing stuff in whatever order you please, beating up the occasional boss, until eventually the key hunt is complete. Went from 2 E-tanks to 7 in a short period and once I'd tracked down a suit, didn't feel threatened by hazards for the rest of the game.

The near absence of secret passages supports the category of a race hack. This is one of the least confusing hacks to navigate I've ever played (out of around 20 or so) which could be very welcome for the type of player who struggles with puzzles and/or finding hidden passages. It's not very demanding with the advanced techniques either which makes this approachable to someone without a lot of SM hack experience.

My actual playtime is probably about an hour longer than the listed completion time. Still, this is a quick and compact hack with some unique features to distinguish itself from the crowd.