Description
A small 20 minute hack in the style of the original Metroid II: Return of Samus.
The bosses you encounter have been buffed a good bit, so try not to die.

Thanks to NathanTech for ripping the tileset directly from M2, and Jiffy, Conner, and FrenchLightningJohn for testing. 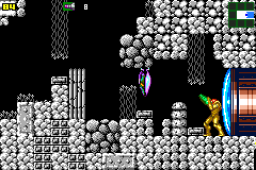 )
91% in 0:13
Read More
A short and sweet M2-looking adventure that's kind of trolley along the way, but it's all good. Recommend for those into the short GBATroid adventures.
By Metroid3D on Jul 19, 2020 (

)
No completion stats.
Read More
While Conner previously surmised everything possible to say about the gameplay experience "Metroid Mission II" I felt it was necessary to further elaborate. Metroid Mission II is a classic example of a romhack that sucks. Hi, I'm Adam Brown, and this, is Gamemaker's Toolbox.

In the words of Rivers Cuomo, "Oh No." was the first thing on my mind when I begun playing this hack. The similarities to Metroid: Zero Mission, a game released by Nintendo for the Game Boy Advanced SP are striking, to go as far as to almost call this a ripoff. The two colour theme seems inspired at first but is a clear ripoff of "Metroid: Gefroren, aber auch heiß wie Feuer", a strange German import hack. The length, sloppily written story and overall themes of hot and cold bring memories so vivid and similar to "Metroid: Gefroren, aber auch heiß wie Feuer" that I would go as far as to accuse sapphron of plagerisim. Or, as Conner might say utilizing an old German expression: "Das Pferd ist den Kleber nicht wert, aus dem es besteht."

This is when I realized I was not actually playing "Metroid Mission II" and actually a .gba ROM file Conner sent me titled "freezenflamefuckyousapphron.gba".

Tune in next week, where I go over the differences between Sapphron and Conner.

Main issues were a few "surprise mother-fricker" type enemy placements, and the way some stuff was hidden. Due to the way the rooms were tiled in the first place, there was really no way to find expansions (one of which I think was required to progress) other than randomly shooting around.

Four orbs instead of three due to the time-frame it was made in. If given more time in the oven, the meontioned issues likely wouldn't exist to the same capicity.
By ptoil on Jul 19, 2020 (

Read More
A short hack that has graphics from Metroid II: Samus Returns. Finding progression at first annoyed me because I had to shoot at a random tile in hopes of finding missiles after getting Morph Ball. Other than that, it was smooth sailing from there. A good hack to play through if you want to waste some time.
By SN_Ivan on Jul 22, 2020 (

)
75% in 0:26
Read More
This mod is a fully functioning metroidvania but it is very unpolished and the creator clearly didn't take it very seriously. This is most similar to so little bubble. Still, 3 orbs for making a proper Metroidvania.