Description
Hello!I'm Heyhooheyhoo from China.
This is my first completely Metroid's romhack.Although it still has problems, I have tried my best.
By the way,the full collection percent are 2000 energy,300 missile and 150 power bomb.Speed ability and Screw attack ability have a small change. 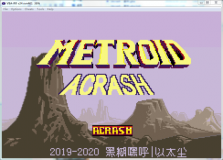 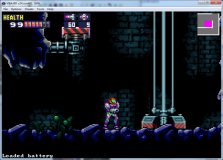 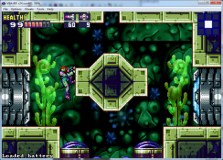 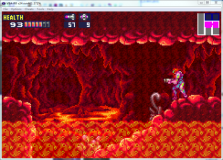 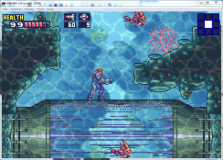 )
74% in 3:39
Read More
One of the better Chinese hacks out there.
First, let's talk about what the hack does right. It definitely has the most aesthetically pleasing level design out of the other Chinese hacks, and it not ridiculously challenging in an unfair way. There are a lot of interesting ideas used in the hack as well. One area in particular, used clipdata values as a puzzle element and was executed very well! One area of the hack features some interesting physics. He also managed to make item blocks (not using my patch, as he made this before that was released). They are slightly buggy, as they all show the missile expansion message, but they work. He also coded rising and lowering liquid into the game, a very neat touch. The hack also has nice custom music. However, I believe most, if not all, of the songs are just one large sound sample in order to preserve the sound quality. This makes the music sound good, but it doesn't loop well and cuts out very often from other competing sound effects. Lastly, the hack seems to be very nonlinear, which is definitely not an easy feat when hacking fusion, so good job. There aren't even any Navigation rooms!
However, there were so many odd and flat out bad design choices that made the hack unenjoyable. The intended path doesn't seem clear, and the requirements for how to get to the end game are not apparent at any point. Unlocking security locks is inconsistent, sometimes a boss unlocks them, sometimes a security room does, sometimes an item does. This made progression very annoying. I got softlocked in a couple spots. One was in Yakuza's room, because I entered the room backwards? He picked me up and dropped me in a solid wall. Second one I found a way out of bounds in a room because the ceiling was air. I don't remember if there were more. There are many cases of enemies hitting you the second you come out of the door. You can climb up walls that aren't real walls. Beam explosions were offset and would appear under the player. BOX respawned for some reason. List goes on. Lastly, the game lags like crazy through most of the hack. Especially after getting wave beam. Otherwise I didn't enjoy it too much. I still recommend a playthrough, as you can tell a lot of work was put into this and it does have a lot of neat concepts. Best part of the hack was the Nightmare fight.

)
100% in 2:52
Read More
This hack is quite interesting, and personally, one of the better Chinese hacks than the ones I've seen so far.
Some of the level designs are good, and some of them are meh, though it could be difficult to tell how progression can be told; as this hack does allow free reign to explore to your hearts content. I think I've only found two airblocked airducts throughout this hack, and I only had to check Glitch's stream for where on earth Wide Beam was. Apart from that, I had found almost everything by myself. Bosses are in locations you wouldn't expect them to be, but can still be tough to decipher which items are good for. Wasn't a huge fan of having Screw Attack and Speedbooster be tied to the Select button, but I suppose it fulfills a button use rather than having Select not be used at all. Door lock progression also falls into figuring out where the hell one's supposed to go, so that ties in with having to consciously backtrack to find some progression.
Custom music is a plus. Quite curious on what the actual anime songs were used for the ending and game over screen. There were also a few unused enemies like the Ki Hunter Nest and Skree-X's. Loved the room where Nightmare was located, but was kind of irked on how entering Yakuza from the back essentially softlocks you. I also didn't like Ridley's room, kind of wish it can be expanded a bit so that the player has more room to dodge his attacks.
Beam explosions either appeared under the player or under the enemy itself, and I don't know how this happened. It just looks weird. There's also some parts of the hack where the game will lag, and sometimes not complete SFX because the SFX began to compete with another SFX. There were also a few times in my playthrough that the game froze, which resulted in a reset. Bombs also are converted into ammo, and PBs uses 10 per use, for some strange reason. Didn't like that, could've been just fine having bombs and PBs as is in the base game. Other than that, the game is playable, and you'll have to be quite the explorer to look through every nook and cranny.
Full completion set is 2000 Energy, 300 missiles, and 150 PBs, though I pretty much got 130 PBs, 1500 Energy, and 190 missiles. Got an ending percentage that says 100, so I'm gonna assume that this wasn't tweaked with what the author intended.
Finished.
Would recommend.

)
101% in 3:18
Read More
Started off bad, and got extremely good mid-game. Lots of ASM in this hack and a whole new world to explore plus a mostly-working map.
Thing is, there's a lot of issues that make it kinda bad. Some crashes, the music doesn't work half the time, other stuff. It was an experiment for sure. All these issues can PROBABLY be fixed but I don't know how to do them...
Also, there's a room with screeching noise. Be warned.
Impressive for its technical feats, but has plenty of bad in it.
Finished.
Do not recommend.
By nisekoishi on Sep 28, 2021 (

)
99% in 4:31
Read More
A great hack held back by some very big flaws. The custom code definitely spices up the game a lot and makes this hack unique in a lot of ways. Definitely recommend for any big Metroid fan to play.

-Non-linear map design. A nice, big open map that lets you go anywhere you want and get abilities in almost any order. Fun to explore and test your skill on the various challenges provided by different areas.

-Buggy as all hell. Lots of lag, some softlocks, text errors, graphical errors, sound errors, you name it, it probably has it. Has a lot of custom code that just barely works.

-Lots of interesting ideas, asm, and level design. Good music and graphics. Definitely on the hard side, and has its fair share of low blows, but is far from unreasonably unfair. For the most part, an enjoyable challenge.

-Another huge problem is the map (not level) design. The map has a lot of one-way doors and tiles that let you enter from one side, but won't let you go back. This sometimes makes exploring a bonafide chore, and the map doesnt even open up that much from unlocking doors or abilities. Additionally it can be very hard to figure out where to go early game, and to a lesser extent in lategame.

-One other big problem is there is no way to figure out how to actually beat the game other than getting lucky and guessing right, or by watching someone else beat it.

-Minimap works, but has issues. Some rooms dont line up, some powerups aren't shown, some are missing, doors aren't shown, etc.
By FrenchLightningJohn on Oct 21, 2021 (

)
No completion stats.
Read More
was a really fun hack to try, beginning is harsh but once you beat mega core X it become a lot more tame and manageable, a lot of bad when it come to music half working or barely working at all, lot of lag in certain rooms (perfect for MST), but other than that it was a fun hack to play, definitively recomand for those that are experianced with fusion, not for beginner at all

i did it offline so i don't remember my IGT (not single segment du to death but manage to beat it in one session) nor i remember my %, if i could i would give 3.5 orb tbh.