Description
Super Metroid Kaizo was a hack originally made by Green Samus back in 2010. The hack was totally forgotten about until it resurfaced in 2014. The hack claims to be unfair and excessively difficult and the creator wishing he could see us when we witness the rooms he created. Unfortunately that never happened because nobody probably made it past the landing till 2014 due to the fact that after morphball the hack just suddenly becomes TAS only hack.

Even if you were to use save state only you would have no chance at finishing the hack. What you need to do to finish to progress sometimes is so obscure, I thought multiple times that I reached the end and that the hack was unfinished even while looking through the editor. It's sad because there is a lot of cool stuff in this hack, beleive it or not, it is not only a spike hack. in a 4-hour long pseudo-TAS the spike section probably only take 20-30 minutes of that.

Although the skill level required to finish this edit is still through the roof, this might be the hardest "Possible" hack out there. So don't feel bad if you have to use save state or even slow motion if your muscle memories are not sharped like those of the top players. The hack does feel more like a real kaizo the way it is now. The previous one was not a true kaizo at all.

With that said if you wish to try this out and you are like me, you earned mad skills over the years and don't feel like searching around forever for where to go next, you just want to put your mad skills to the test. I included a spoiler text file that tells you where to go next. 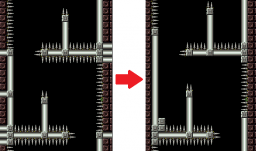 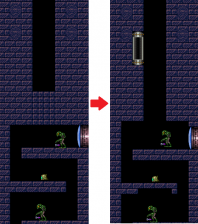 )
43% in 7:30
Read More
This hack is more than challenging. Quick respawn makes playing easier but with how many deaths you will experience, save states are needed to make the experience tolerable. Boss battles were easier than expected for a "kaizo" hack.
Plenty of savestates were used.
rta time is 27h 46m

Read More
No animals to be saved (in an older version of this hack).

Rating for some hacks may be off by 1 Star, but arguably not more, and ratings are not attempted to be provided within the precision of ''half orbs''.
By Sapphron on Mar 28, 2020 (

)
43% in 4:24
Read More
Finished, savestateless.
Excellent challenge hack. This is more than just a spike hack, even though that's what the screenshots show. Exploration is very open but you don't actually have many places to go, it's very linear except for a few unintended sequence breaks. This hack excels at what it goes for, and I'm so glad that I played this. It was amazing. A quick note, no e-tanks in this hack. Almost all ammo you can get is required. And if you want to make it a little easier on yourself, there's the spoiler log. I used it because it's nearly impossible to figure out where to go on your own for some of the hack, and ptoil made a map that marks all the missile locations, here: https://drive.google.com/open?id=1TXrs5Euxxzf7YPVZHV-ISgAY5muBEaug I also used that. Thanks to Lioran for fixing this hack up and making it fun!
Finished.
Do not recommend (without savestates).
By Sickwood on Mar 12, 2021 (

)
43% in 6:44
Read More
By far the best challenge hack I've ever played. Using oatsngoats video as a route guide and savestates, I was shocked I was able to finish this one. Everytime I thought I was stuck at an obstacle, I found an alternative strat to progress. I plan on replaying to see if there were alternative paths than what Oats used. For example, the first super missile required an insane amount of bluesuit/xray jumps that I kept screwing up, so I just reset and brought a spikesuit down there and activated it on the crumble blocks, but it looked like there might have been a path coming from the right? I also thought I was stuck outside of Draygon because my emulator setup has too much pause delay to do a double Springball jump, but I assume the intended strat was to knock off the crab on the left and follow it to grapple on the right? I'm also curious if the original version had a grapple block to get out of Draygon or if xray climb was intended because it seemed like it was setup for the xray climb. And were you really supposed to go OOB down a sandfall in the Maridia section to get a missile pack randomly in a wall down in a sandpit? No one would have been able to play this blind like Sapphron said, especially the required missile hunt. Lastly I'd like to thank Oats for obviously influencing Lioran to add a MB2/MB3 hybrid and an escape timer which wasn't in his version and I wasn't expecting at all and instantly died by running into her head that I thought was dead. That hybrid MB, although really cool, sucks because she attacks like MB2 and takes damage like MB3, but no hyper beam so you have to charge shot her and can't stun her from attacking. Interestingly you can break the escape timer by leaving the chamber immediately, otherwise you have 1:30, so definitely recommend glitching the timer. Incredible hack that might not have even been remembered if it wasn't for Lioran. Thanks for your hard work.