Description
Samus has been hired to investigate MockingBird Station. Others have come before her, but none of them have returned. Upon arrival the station sealed the hanger doors blocking her way out. After scanning her systems, Samus finds that she must disable the stations power generator before she can leave. Unfortunately the most direct route to the generator has been blocked and she must take a more roundabout path. The only thing that she knows is that much of the station is in lock down and she will need to release bulkheads to open more of the station. A larger bulkhead in engineering is blocking the alternate route. Disabling the generator will destroy the station, but there is no other option. 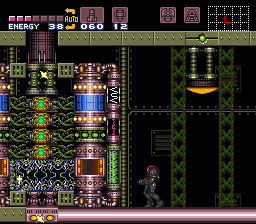 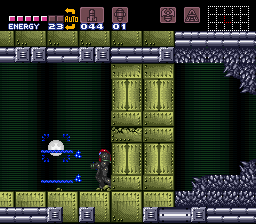 )
50% in 1:41
Read More
Mockingbird station is an interesting concept thrown inside a blender of spikes and pain. The hack is very unforgiving, but at the same time, relatively enjoyable. Having to find doorcaps and open them to advance in other parts of the station is a really interesting idea, and it is pulled off relatively well.

Traversing the area is a big hassle in a lot of cases and can be a major cause of concern. There are also a lot of spikes, plenty of ways to die, and cleverly hidden secrets which can kill the player as well.

This is not going to be everyone's cup of tea, but you could do far worse than Mockingbird Station if you're looking for a relatively short and challenging hack.

)
43% in 3:34
Read More
This is actually two hacks in one.
Mockingbird Station & Get The Grapple.

Easy four stars if it gets finished with spore spawn & power bombz though.

)
No completion stats.
Read More
Love the background level designs of the depths of the engineering room. Sound selection gives the station an eerie vibe even though it is well lit. A few issues, and other things worth mentioning but dont want to give out spoilers. I do wish there was a more thorough background or synospsis on this hack, and a map. Because without these suggestions, I did need a lot of youtube to follow to make it through the hack. That was not the case with other hacks. Its an older hack so difficulty is up there.
By Sapphron on Jul 06, 2020 (

)
34% in 2:12
Read More
A...special hack.
Quite difficult and not many sequence breaks. Suitless underwater is forced, and the final boss is quite tanky. I really didn't like the room for it but it made for a special challenge.
No map quite sucks. There are probably quite a few things I skipped too.
Door locks were used quite well in this hack, probably the first to use them this extensively.
Ice's location was incredibly stupid for me, it took some guiding from Ri2 to find it. Same with Spring Ball. Once again, not having a map hurts the experience quite a lot.
Music is eerie, level design isn't out of place for a station like this, the atmosphere is quite good. It's on the hard side.
44% in 2:00 second playthrough.
Finished.
If you're willing to use savestates, I recommend.
By Kandier on Feb 10, 2021 (

)
No completion stats.
Read More
Ugly & weird hack, everything looks almost saturated & it doesn't even have a map screen
By caauyjdp on Feb 26, 2021 (

A good four orb hack that gets dragged down by few very annoying design decisions/restrictions.
The only save station is the ship. There is no map. Because the hack is quite deadly at times, you're forced to choose to either backtrack a lot of rooms back to the ship to save and then traverse them again to get back, or remember where every single thing you picked up was, possibly making a map, to recollect everything after death.

I chose to backtrack every few items. If you want to play this without getting annoyed, I recommend savestates.

Getting grapple was the worst part of the hack. Had to resort to pause abuse, and even with it took a while, partially because getting back there takes time.

There was one case where I missed scroll trigger and after failing to get back onscreen, had to deal with broken scroll offsets after door transition eventually leading to reset.

Super at turtles seemed to be respawning. Possibly not on reentry but on save reload, because same seemed to happen to one red door I opened.

Some "doors" were missing plm at the bottom tile. One of them seemed to use different index resulting in a new glitched door spawning from the bottom tile on room reentry.

"Broken" green gate was a terrible design decision. If you have tings that can be mistaken for unintentionally broken, there better not be actually broken things in the hack.

Ceiling clips doesn't seem to be required anywhere, and if you want to try, take care, because some ceilings seem to be just one tile thick, and you can easily clip to oob without a way to get back in.

One neat thing about the hack tho, is that lag was made a feature.
Another neat thing was, that after getting a new power up, I immediately knew which room I needed to use it in, just not where the hell it was or how to get there again, and whether that was a way to progression or just an expansion.

If you don't mind using savestates and can shortcharge, I recommend this.
By Aikner on Sep 13, 2021 (

)
51% in 10:53
Read More
Even though the entire hack takes place on some kind of station and looks very mechanical, it doesn't get boring or repetitive. The layout of the sectors gets more intriguing, challenging and menacing, the deeper you go. The above mentioned super missiles and an energy tank in a spiral block maze respawn on save reload.