Description
This was my entry to the Deep Blue contest, you can check out the full list of features by visiting the forum post. 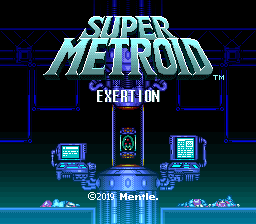 )
35% in 1:59
Read More
Animals Saved!
I like the idea of exploring every corner.
New music!, I like these hacks with something different from the usual.
I had fun and enjoyed searching and finding each item.
Having 2 extra suits is very nice! so that would be nice to see it in a full hack!


I must mention the colors are not my likes, but that is what blue was all about, so there is no complaint.
The game has a bit of editing errors in the map, blocks, scrolling and slopes, but their are acceptable.
I would have liked to seen new tiles, although this is a contest hack, there is no need to be so demanding.


The game has potential if it was decide to fix stuff, make it bigger and change the palettes completely.
Animals Saved!

)
No completion stats.
Read More
Man, you buggin! Really sweet hack even if the last level is glitchy and had me frozen a few times.
By Syphon on Nov 27, 2019 (

Exploration was good. New suits are a neat concept. Custom music was cool.

It lacked a bit of polish though. Map tiles aren't correct in many spots and Draygon didn't appear (unless this was on purpose?).

)
No completion stats.
Read More
WARNING: MASSIVE SPOILERS AHEAD, READ AT YOUR OWN RISK.

Honestly, the only thing spicy about this hack was the ''2 new suits'' thing, the world is smaller (no tourian or norfair), the map is EXTREMALY buggy (for example, in brinstar there are words on the bottom-left map that are supossed to be the ''red brinstar'' deleted section of the game, except this area DOESN'T EXIST!!!), enemy placement was bad, in contrary of vanillatroid (wich has very few space pirates), the game is INFESTED with space pirates (especially in the final portions of the game) and pretty few normal enemies wich damages the unique fauna that makes metroid great, the bosses are few (only 3 to be exactly, bomb torizo, spospo and phantoon) and only phantoon is a bit challenging (still fairly easy thx to screw attack), the sector z gates idea (clear inspiration from hyper metroid) was quite good, even though most gate locks are poorly hidden, non-beam weapons are almost useless in the game, missile is only useful to unlock white gates and killing some enemies in the beggining, power bomb is useful ONLY on brinstar, and surprise! NO SUPER MISSILES! The good things about the game is morph + bomb and hi jump + spring ball in the same package, and the new suits (wich aren't big thing honestly, iferno suit is only useful on 2 rooms to walk in the lava and in one of them there almost ins't lava! last suit is pretty useful tho but is in the very ending of the game and all the 5 suits have very bland design.). overall the game is meh, not cristener homenag-tier bad but not good either, a pretty solid 3.
By Kandier on Mar 08, 2021 (

)
37% in 2:00
Read More
This hack isn't bad, just is short & seems incomplete, it has some issues like wrong location on map screen & doesn't save your trail after save, a map screen that looks like Hyper Metroid or Super Metroid: Escape II would be great!, it haven't Super Missiles too, but... the ship looks fantastic & performance is very good, the multiple suits idea is good but needs to be expanded, this hack has potencial!
By drr3member on Apr 07, 2021 (

I thought this hack was alright. I liked the colors, the custom music, and exploring the map. Brinstar and Crateria were my favorite areas, but the other two areas felt empty. To me it felt like a "here's all the items, now fight the boss" kind of hack. It was easier than vanilla, save the boss fight, which was pretty tough because Phantoon is hard to predict. But the escape was a leisurely walk back to the ship.

Something I found bizarre was the mini-map. I go into a room, which I know is the one displayed on the map, but the blinking square has me a block above in empty space. And then I also accidentally softlocked myself into an infinite elevator ride in Sector Z. It doesn't take away from the hack too much, but I think that one elevator in Sector Z doesn't need to be there.

This hack could've been so much better if there were more puzzles and boss fights. It also doesn't need every single item. All the items were just waiting to be collected one after another, and that became boring to me because the pacing in the first two areas was great, and then I just started getting item after item without fighting any more bosses. So in that regard there is some improvement to be made.

)
34% in 0:58
Read More
Really fun hack. Color scheme made it difficult to tell when you could shine spark.

The minor glitches (embedding into floor on room transition, map tiling, laggy last area) Wouldn't stop me from recommending the hack.
By Pixel_Tiger on May 24, 2021 (

)
No completion stats.
Read More
Very nice but short hack. Would be nice to see a longer more refined version of it someday. Music was good, room design and graphics were good. Difficulty is Vanilla imo.
By OmegaMalkior on Jul 23, 2021 (

)
36% in 1:40
Read More
Loved this hack from the absolute start to finish. The color gradients of blue were used well, felt inspired by OG SM at the beginning but the rest is very unique. Bless the physics of this romhack, think it took inspiration mostly from Project Base? Stellar hack that my only gripe is that it feels short, but probably due to it being a contest submission. Thanks to the creator that told me on YT that the grayed out blueish doors were missle doors as I did not know that lol.
By Zhs2 on Jan 26, 2022 (

)
35% in 0:45
Read More
Very short but generally fun. The music in Sector Z is the best part of this hack, all of the other custom music sucks. Whatever the hack author did to Spore Spawn's music was ear pain. There are also plenty of map tiling errors, room entrances into platforms, and the floor elevator in Sector Z can gay baby jail you if you press up again on the top floor. If these errors were fixed up I'd give it an easy four stars.
By Sapphron on Feb 13, 2022 (

Read More
Nice hack! Fit the theme well, and didn't overstay its welcome. The equipment additions were cool but did feel a bit shoehorned in. Custom music is good, level design is good, good hack. Only problem is that the hack crashes when grabbing Gravity Suit on SNES Classic, so I either needed a custom patch or to play on a different emulator.
Finished.
Recommend.

)
37% in 0:54
Read More
Really great small hack. It has a couple very minor janky things with the map and a broken elevator but it's well polished apart from that. The suits are a cool gimmick. It's big issue for me is that it's too short and the bosses were too tanky. I was split on going with a 3 or 4 but it's just too short for me to be an easy 4 so with the glitches and bosses I set it back another orb. In saying that it's very enjoyable and a great full albeit small hack. It fills a niche and I enjoyed it. Thanks for the great hack.