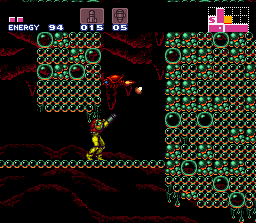 Play this if you are new to Metroid hacks, like vanilla-style hacks or are interested in seeing what a 2005 hack looks like.
By JamieWebb16 on Sep 17, 2019 (

)
81% in 7:11
Read More
Map doesn't save, so I'd recommend trying to apply that patch before playing if you can't play in one sitting(or use save states). Not going to rate it worse because of this specifically, tho it did greatly inflate the playtime.

Wouldn't recommend completing it, but playing till you'll get frustrated might be worth it.
By PHOSPHOTiDYL on Dec 27, 2019 (

It does freshen up the game by tweaking the boss order, rearranging the expected places for items, and changing where does each area connect to. I recommend this to new people who want to play ROM hacks. It has vanilla physics, so you don't need to relearn anything about moving, and it just feels like a new map of Super Metroid, and I think that is the type of ROM hacks I like. New maps of similar difficulty.
By nodever2 on Apr 22, 2020 (

)
No completion stats.
Read More
Very good for it's time. As a piece of history, I'm glad we have it.
But would I recommend anyone play this now? Not really, unless you've already played many of the other great hacks on here. There are a lot of little things in the level design that frustrate me that add up quickly, and it in my opinion doesn't do enough new things to justify that frustration. (Not that I'd blame the hack for it, again there just wasn't the resources nor the years of hack design iteration that we have now in hindsight, and again I respect the hack for what it did with the resources it had, it's just that nowadays you could make better use of your time, I think).
By Kandier on Mar 07, 2021 (

)
No completion stats.
Read More
Boring & tedious hack, the layout is confusing & annoying, inferior than original & the map screen is shit
By Demonskunk on Jul 11, 2021 (

)
81% in 5:30
Read More
The hack is unintuitively designed with secrets that require an unreasonably attentive eye for detail. There is a lot of backtracking across the entire map to get progression items.

I was stuck for an hour trying to figure out how to progress through Maridia because the area is split in two.

I don't recommend it. It's an interesting bit of history, but it's more frustrating than fun.
By LetsPlayNintendoITA on Jul 23, 2021 (

Read More
Really liked it.
You can see the recognize the original's rooms but they're all new and a fresh paint of everything.
The boss order is what threw me off, not in a bad way, but I had a hard time getting to where Maridia starts for real (unless you do a close quarters short charge). Draygon before Botwoon lol. One of the complaints I've is, it kinda needed some shortcut cause traversing a region whole sometimes, with how big it is, it feels kinda slow. For the rest really enjoyed.
p.s. sometimes the map breaks big time erasing progress in it lol
By Sapphron on Feb 13, 2022 (

Read More
This is a pretty historical hack, basically the first full hack ever. It's pretty good except for the map breaking, really frustrating which knocks it down to 3.
Finished.
Recommend.

)
76% in 4:38
Read More
pretty good for an ancient hack. not without its share of bad design though. pretty sure i sequence broke early on for power bombs. there is one puzzle that seems like a required mockball but isn't. grapple was one of the last items i found. there's one false door puzzle that kept me from finding progression for a long time.

its progression can be confounding: i am pretty sure that the intended boss order was not kpdr, but i ended up killing them in that normal vanilla order out of pure chance from stumbling around.