Description
Author of ''Metroid reverse'', is the remodeling work of Sin's work.
Have unique ideas studded everywhere, not bored players.
In addition Like its predecessor, the mandatory skills such as Wall Jump, there is also a mechanism that uses it, without a doubt that struggled even in fairly spear crowded but people the original.
Anyway gimmick is amazing.
One loss is not to keep doing. 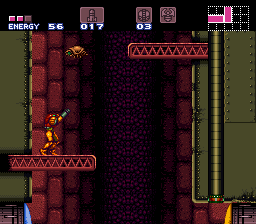 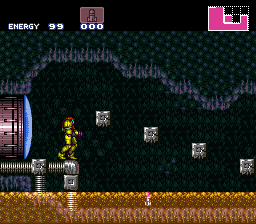 )
No completion stats.
Read More
This is an old Japanese challenge hack, so don't expect anything else from it. It has some pretty interesting rooms and ideas, but mostly the hack is just unnecessarily frustrating. It has save stations, but they are poorly placed, and not near areas you're likely to have trouble in, and the movement from area to area doesn't flow well.

One item can be permanently missed if you go the wrong way, and going the right way forces you into a difficult gauntlet. At the end of the gauntlet, you have one chance to pull off a trick to get it, and if you miss it you cannot go back. This area also requires use of an obscure, unstable glitch to leave, and the glitch will not work if your last elevator ride was going up, so your save file can easily be permanently stuck here as well. Unfortunately you will suffer greatly without the item, but getting it is an even bigger ordeal.

The hack has an interesting gimmick in that at one point, you are forced to choose between getting your first super missile or your first power bomb. Which one you choose determines which route you will take throughout the middle of the hack. One of the few things I liked about it. Unfortunately the author did not compensate for this properly, and the maximum item collection rate is 99%, which really sucks considering the effort require for the missable item I mentioned earlier.

The speed booster escape and ending of the escape are really cool, but there isn't much to enjoy aside from that. The hack is littered with bad design choices, even for a challenge hack. Not worth a playthrough unless you really want the challenge.

)
No completion stats.
Read More
Seemingly great, this one is an old goodie.
The level aesthetics are pretty solid, but this hack is overly punishing.
I had to hack the game to complete it and fully enjoy it.
A valuable gem that somehow broke itself. Perhaps someday someone will piece it together?
By Sheoldred on Aug 08, 2016 (

)
No completion stats.
Read More
An old "feature length" hack that influenced later hacks. The design is pretty similar to the original though. Don't expect it to be a cakewalk either, as it is pretty challenging, but the level of changes in area geography make it worth it.
By Foxhound3857 on Oct 18, 2016 (

)
85% in 5:05
Read More
One of the few older hacks remaining from back in the day. Precision is the name of the game here. Limit is all about trial and error, often through repeated deaths (be prepared for a lot of these with the Speed Booster), which is frustrating in its own right because save points are very sparse. The map itself is not particularly big and often the way through key rooms is obvious; actually pulling it off is where the challenge comes into play. You're encouraged to explore everywhere you can though, every E-Tank helps. Learn how to wall jump; you will not survive this hack without it.

Quite a few creative ideas utilized here, such as the Ice Beam room and another item just outside of it. Again, though, it's all about execution, and sometimes this hack expects you to be just a little too precise. One particular room before Phantoon really stands out in this regard. Get good with the Grappling Beam. You've been warned.

Also, one item in particular is damn near impossible to get without tool assistance. Unless you are okay with using savestates or are EXCEPTIONALLY skilled at walljumping and midair morphing into IBJ, pass on this one and just make do with its weaker counterpart. Two boss fights will be significantly harder without it, but ce la vie.

Tourian is a mixed bag. Escape sequence was awesome. Getting to Mother Brain was painful.

Rating for some hacks may be off by 1 Star, but arguably not more, and ratings are not attempted to be provided within the precision of ''half orbs''.
By Crys on Dec 20, 2016 (

I can't really say much more about it. It's from an era where hacks didn't need to be amazing to get a lot of praise, they merely needed to be of the "fullhack" variety. There is a lot of weird and bad gimmicks being used, poor save station placements, awkward visuals in a couple of areas, etc. There are many complaints to be had, but on the contrary there really aren't any positives to speak of, I for one don't have any that comes to mind.

If you want to see some weird gimmicks using engine quirks? Go right ahead.

Want to actually play something enjoyable? Look for another hack.
By ptoil on May 25, 2020 (

)
86% in 5:10
Read More
Very interesting hack. It starts out slow and with big rooms with lots of doors it can be overwhelming and hard to navigate. Finding where to go for progression isn't always obvious or easy to locate since the map doesn't save properly. There are very few save stations, so I used savestates at times to keep my progress.

A lot of the hack felt like I was just running around finding items/progression, with cool or challenging rooms just lightly sprinkled around. With some help from looking up where to go next the hack wasn't too bad.

Took the super missile route.
The rooms that were cool were very cool and memorable
I enjoyed it, but theres definitely room for improvement, as expected from an old hack.
By caauyjdp on Jan 03, 2021 (

)
No completion stats.
Read More
Played this for about 12 hours, died in escape to failing to find way forward, did not feel like getting to mb again.
It's an interesting hack if you like using uncommon mechanics.
Going to tourian was really neat, A+
By Sapphron on Feb 12, 2022 (

)
87% in 3:39
Read More
Yeah, it was alright.
For 2005 it was surprisingly well done but it has its flaws, including the map issues.
You can be permanently locked off from items which is a big no-no but I shouldn't expect so much from a hack as old as this. Unless you're looking for a challenge that you haven't found after playing a ton of hacks, I wouldn't recommend this tbh.
Finished.
Do not recommend.