Description
BALLS TO THE WALL.

A short, linear hack that has Samus in ball form the entire time. This also sets up the possibility for a much longer hack to be built off of this one in the future, since it doesn't play much like a traditional Metroid game. 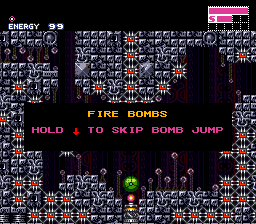 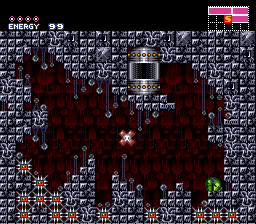 )
5% in 0:03
Read More
This hack is probably the best minihack I've played. Level design is interesting, the premise is unusual (you're stuck in morph ball. Have fun!), and the way the mechanics are altered makes for a really unique experience. It's long enough to have fun, and short enough that it doesn't overstay it's welcome.
By FullOfFail on May 18, 2015 (

)
No completion stats.
Read More
A shockingly fun adventure as the morphball. Wouldn't sound very fun on paper, but it is.
By JAM on May 19, 2015 (

)
10% in 0:07
Read More
This hack morph your balls from the very start and will hold it like that for the entire game. And you'll like it. A bit more hard that original game, so I'd give it Veteran difficulty.

This hack even have the boss battle and it's epic.

)
100% in 0:06
Read More
Awesome! For a change this is realy good xD I wish there was more levels though, it ended realy quick I hope you gonna work on it more!

)
10% in 0:07
Read More
Really cool idea, with good execution to boot. Fun challenges/puzzles with the morph ball, coupled with good visuals, led to a fun experience that I'd recommend.

I kept dying at the speed booster part while trying to figure everything out, but that was the only issue I had.

)
No completion stats.
Read More
highly enjoyed even though it was a weird hack.
By Nemesis on Jun 19, 2019 (

)
10% in 0:09
Read More
Best hack I've played so far. Super fun. I never felt frustrated, it was always clear what was next, but everything was novel, too, because of the morph-ball-only format. I'm a noob, and I thought the difficulty level was perfect. I died twice, but mostly it was not too hard. Beat the whole thing pretty quickly. I hope someone adds on to this with some more rooms! (and maybe an escape sequence?)
By Kandier on Jan 27, 2021 (

)
No completion stats.
Read More
Super Unique and good, if not the best, SM challenge hack.

I also had a weird glitch where after a couple retries Samus' starting position (in the first room) would shift a character width to the left just as you start falling
By Kremit44 on Jul 08, 2021 (

)
No completion stats.
Read More
Unique but far too short.
By LetsPlayNintendoITA on Jan 15, 2022 (

Read More
Cool little hack. hope for a sequel. was fun and really cool concept.
By Sapphron on Feb 13, 2022 (

)
No completion stats.
Read More
Fun and very short morph challenge hack. Final boss could be a little difficult if you didn't get all the tanks.
Finished.
Recommend.