Description
Guide Samus on her mission to a new planet that rotates very fast. She lands in the morning, when heavy fog obstructs her view. Hurry to safety before the sun heats things up by midday. In the evening rain falls and accumulates, making it difficult and slow to navigate. At midnight the water freezes, icicle spikes form, and there is barely any light. Spend your time wisely as your optimal routing will change depending on the time of day.

Features:
-Almost every major item has been edited to have an additional ability/mechanic.
-All boss fights have been tweaked, some more than others.
-An open world with no true intended route. The route you take depends on your speed and your comfort level.
-As said above, a rotating world that cycles through day and night, where if it is morning on one side of the planet it will be evening on the opposite side, and so on.

More details can be found in the readme. Please consult the readme if you do not figure out how to use either suit abilities, as in-game instructions are absent.

A rather buggy and harsher version of this hack, then named Super Metroid Revolutions, was showcased in the 2021 oatsngoats hack contest. Don’t be intimidated if you watched that. Many accommodating changes have been made, for example lower spike damage.

WARNING Although some design decisions were made to make this hack accessible to less skilled players (for example you never need to walljump or mockball or ibj), one trick that is absolutely required is midair morphing. If you cannot jump from the ground and morph by the time you hit a ceiling 5 air tiles above the ground, do not play this hack. I believe everyone can do this if they practice, but it’s not worth playing until you can do it with a modest success rate. 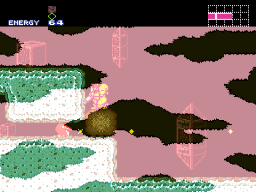 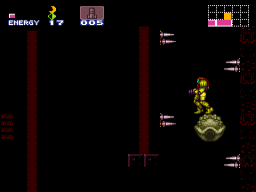 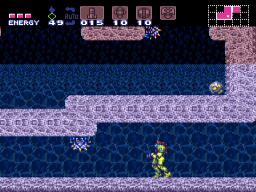 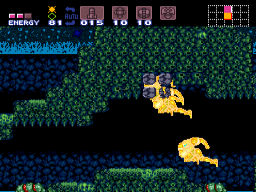 )
No completion stats.
Read More
This was a very interesting hack and quite a different experience. Tons of custom code revolving around the "cycles" theme and new functionality to items. What I liked most about the hack (and what might turn off some) was the exploration. The hack doesn't offer much direction and the way the maps are made in relation to the areas doesn't really show you the way or interconnection. That was perfectly fine to me and I enjoyed being completely lost and just pushing through until I popped up somewhere that looked familiar. The maps also don't reveal a good portion of the hack so the size of the hack is deceiving and ended up being a lot bigger than I expected which added to the enjoyment. It also feels very open with multiple routes to the point I ended up finding regular bombs near the very end. I did experience quite a few crashes, some related to a fixed bug during the rain cycle, others seemingly random, but save stations were nicely placed so it didn't bother me. Some of the new item mechanics were hard to get used to and employ and I still don't understand the random floating in certain rooms at certain times. Despite all that, this was a very fun and ambitious hack that I enjoyed quite a bit. The planet cycle theme is something that makes total sense and makes you wonder why that hadn't been thought of before. Recommend for those that enjoy blind exploration and can tolerate a few bugs for a new experience with cool new ASM. Can't remember time or item percentage, finished the first week it was released.
By dagit on Mar 26, 2022 (

)
93% in 3:55
Read More
Lots of creative changes to the base game. Initially, I was going to give this hack a lower score. My first 2 or 3 hours of play were brutal and I was salty. I just wandered around and died constantly. With enough wandering and occasionally getting lucky, I managed to get a foothold. Once I beat my first boss things just snowballed from there.

Before I knew it I was making all sorts of progress and collecting lots of items. Most of the new mechanics were good. I don't think I'll go into details here just to avoid spoilers. Probably my least favorite new item mechanics were the suit mechanics. However, I think I liked everything else.

The ending was sort of hard to find but I did eventually find it. I think this hack could benefit from a way to wait for the next time of day, like how geralt can wait at a camp fire in witcher. And maybe there could be some change(s) to make the early game less brutal? Early on staying alive was hard but near the end it was almost too easy.

Overall I enjoyed it. I'll probably need to be really careful who I recommend this hack to as I think it requires a fair bit of patience and determination to get through the early game and survive your first couple boss fights.

)
98% in 3:19
Read More
If you're willing to butt your head against a wall for a while, there's a very unique hack in store for you here.
The tiling style and the rooms are super weird but in a way I liked. The ASM is very well done with a couple hiccups and crashes, saves are frequent enough for the crashes not to be much of an issue but I really hope they get resolved, obscure as they are.

Some of the roomstates are incredibly frustrating, especially the ones with the wind. You can find yourself blocked off from a boss entirely, which is annoying when you're basically done with the area and just want to fight it and leave. Heat also stops you from doing a lot of the things you want to. Also, did I mention the bangs??
The item progression is almost entirely nonlinear and like Sickwood said you can get early-game items super late (and vice versa)which can be really rewarding or offputting depending on how you play. Major items also have no special rooms for the most part, you really just find them sitting somewhere in an orb in a room. I'm used to the typical dedicated item room for something and said item being required for something close by, but not in this hack. I guess that has to do with the rooms changing for each weather cycle.

Overall, this hack can be pretty polarizing and confusing but it can also be a really interesting romp and wow you with some of the custom stuff.
Finished.
Kind of recommend. (once again, what kind of player you are matters)
By KPF on May 04, 2022 (

)
No completion stats.
Read More
Tight jumps, quicksand, spikes, painful random crumble blocks everywhere & enemies that knock you back into the last room on entry are hallmarks of a shitty ROMhack

Played about an hour before bailing