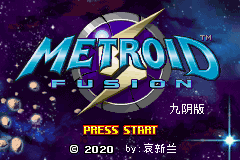 )
No completion stats.
Read More
Stupid minimal-effort retile hack that puts SA-X in the second room and an instakill Powamp in the floor of the third, right as you run in. Oh, and the starting missile maximum is zero, so you'd be convinced at first that you have to cheat to get farther than the Operations Deck.
Don't bother.
Oh and also you can't even open it in MAGE to see what little you're missing out on because the "AMTE" code in the header is changed to "9yin". So get that fixed before trying such if you want to waste another minute of your life.

)
No completion stats.
Read More
Pointless changes in the beginning, and lots of stupid changes otherwise. Found the first missile tank, quit after sector 1. It's just a more annoying vanilla, what's the point?

)
No completion stats.
Read More
So, apart from the surprise SA-X in the second room, this game forces a soft lock on Missiles that if you didn't explore through the Main Deck to find one Missile tank (which I found legitimately), one gets in a forced placement to cheat just to progress. The way to Serries requires shooting a missile above a door, and the way to the water pump requires a tight shinespark.
Edit: Managed to get through Water Pump room legit through a hidden elevator in the room, and got to the security room in PYR with a speedboost jump, followed by a precise shinespark to get into the door frame. Hack doesn't change much after that, since the entrances of NOC and ARC are altered to require speedboosting through them. Stopped after acquiring Wide Beam.
Do not recommend, did not finish.