Description
This hack was created to show off Samus's ability as much as possible. It's like glitchtroid and impossible combined.
It's recommended to check the contents of the archive before playing.

There are two Edition available
[standard version]
Some insane, but become much easier by update.

[super mild version]
It is greatly reduced the risk of death and pain. 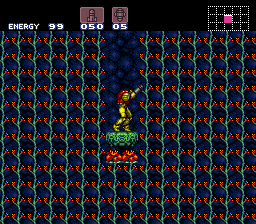 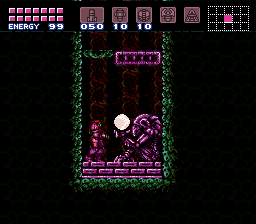 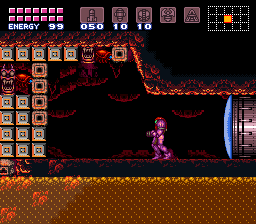 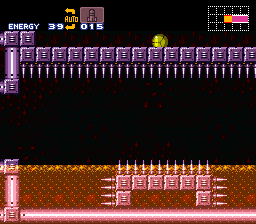 )
No completion stats.
Read More
This hack is trying to be a Kaizo, puzzle and exploration hack at the same time and it's not executing any of those well. The puzzle is good but there is never a clear line where it's possible to go or not to go and considering the obscure tricks needed for this, most people even veteran won't be able to make it too far without guidance. If there wasn't somebody telling me where the next puzzle was, I would not have bothered with it. That combined with some dumb choices to sometimes make the puzzle tedious to execute, not because the trick is hard but because it was decided that it should be harder by adding a block or something. Happened many times where I figured out the puzzle but spend an hour just trying to execute it and saw multiple deliberate attempts at making the puzzle harder. Hack feels like it has bipolar disorder, where it will do things right most of the time and suddenly just throw a dumb curveball like you're playing a Mario maker level. Personally stopped at the escape on the final hurdle because what was required from me to do was just not worth it at that point just to see a credit roll. With that said, hoping for another hack without the bad dev decision and a more coherent package if it's focused on puzzles again. There is some potential here, just need to realize what's makes for a good experience and what doesn't
By Sapphron on Dec 15, 2019 (

)
85% in 20:55
Read More
NOTE: THIS REVIEW IS FOR HARD VERSION v1.5
Hands are shaking at the time of writing this review.
This is an extremely long hack, and if you have little experience with SM in the first place/don't know a lot of tech, don't even bother patching this hack to a ROM. I mean it.
This hack will thoroughly test all of your skills, and force you to learn lots of new tech. Most of the puzzles in this hack are absolutely brilliant, but I guess a few of them are quite obnoxious and can take multiple hours to execute if you don't know what you're doing.
Exploration didn't seem to be much of a problem, as I was able to remember where I needed to go next most of the time. Sequence breaks are non-existent due to how dang linear the game is, but it does work out well that way.
Every room is different from vanilla SM, while still keeping the layout very similar to the original game. It is a halfhack, after all.
The original version of this hack was released to the public after about 3 months' worth of work, so it has quite a few tiling errors (especially in Norfair/Crateria)if you look close enough. Despite this short timespan, I NEVER found a single permastuck/softlock in this hack. He did an excellent job of preventing softlocks, and I applaud him for that.
Onto execution...
The execution that you will need in this hack is basically unparalleled. Lots of tricks happen to be super tight or one frame tricks, even. Expect to get frustrated and rage quit many times if you try to beat this.
The escape is quite interesting, as there (almost)isn't a single puzzle in sight. It's all execution. I'm fine with this except for the final trick that you have to execute, which is a super short charge. These are normally fine except this time I had to use a practice ROM to learn the timing for the short charge. I normally do a stutter 3 tap so this isn't a problem, but you need a 2 stutter 3 tap at least for the last part. It's very stressful. But at least you have ~15 minutes, right?
I played the "hard" version and I'm not sure how much the puzzles were toned down on the Super Mild edition, as it doesn't seem like much of the difficulty can be relieved honestly. I recommend Super Mild if you try it regardless.
The game isn't also straightforward all the time. It can be really hard to figure out what to do for certain puzzles, and I did look up the solution for a fair few puzzles. Not too many, though. I figured out most of the hack on my own which I am proud of.
Bosses aren't really changed health-wise, but look out for the actual boss room layouts. They are quite difficult, especially Kraid. That one was the worst.
TLDR; this hack is probably the most challenging hack one will ever play in any aspect. It's probably not worth your time unless you know so much tech that you feel extremely confident coming into this (like I did).
Finished, 88 deaths. NO SAVESTATES.
Recommend solely if you have lots of SM tech knowledge.

)
63% in 22:51
Read More
time is IGT non-single segment
this review is for mild version

this is a very long and arduous puzzle hack, the mild version remove a lot of element in early game that would make it a kaizo making it more enjoyable, if i was doing the hard mode i would had ragequit at speedbooster for sure, this hack is not made for everyone as it will challenge both your skill and deep knowledge of the game, it require a lot of obscure knowledge to be able to complete, if you ever want to try it you should ask sapphron, me or ED (as far as i know we are the one who can help with this one, maybe other can) for help to finish it if you feel you have the skill to complete it. it is a very hard puzzle hack so i highly not recomand for those for have only have max advance knowledge as you need obscure one.

on that side reason i give 3 (3.5 but can't give half rating sadly) is the hack try to much to be a kaizo, exploration and puzzle hack at the same time, it should had stick to the puzzle aspect imo which it does it really well if you remove the kaizo aspect hence why the mild version is enjoyable, the exploration part was alright i bet it could had been a lot better if hota would had not try to implement any kaizo element in the hack, overall i had a good experiance with this hack, i did rage about it as it is normal due to the immense difficulty the puzzles are in term of knowledge and execution. but nonetheless a good hack to experiance

big shout-out to ED aka EternisedDragon on twitch aka Aran;Jaegger on discord for helping me, without him i would had not finish even with my vast knowledge of SM i still have lot to learn and still some weird mechanic and obscure knowledge to learn, ED is a real god of knowledge when it come to SM, so big shout-out to him, sadly was unable to save the animals at the end.
By Sickwood on Sep 05, 2022 (

Read More
Decided to play this one day on a whim and I'm really glad I did. I had read the reviews after it won best challenge last year, but that was the extent of what I knew about it. It's definitely a niche hack that not many would enjoy and it's not a perfect or aesthetic looking challenge hack, but I'm amazed that Hota was able to design this as a first hack and squeeze in so many puzzles in a manner that made sense and was consistent with item and route progression. He even used some custom code in the process and pretty much emptied the wiki of every exploit in the book. Big thanks to ED for hanging out every night and dropping subtle hints when needed. Having a player of his caliber around inspired me to keep going. Not much else to say that hasn't been covered by other reviewers. Overall, definitely deserving of best challenge hack of 2019 and a memorable experience.

Thanks for the hack Hota.