Description
Deep Freeze is a small Zero Mission hack with new environments, item progression, layout and more. Some small ASM and hex tweaks were added as well as some rad palettes. The hack should take a bit less than an hour on your first playthrough so give it a try! Try to earn all of the ending images! 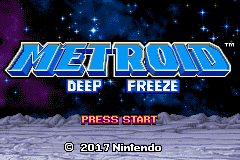 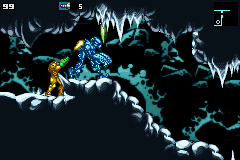 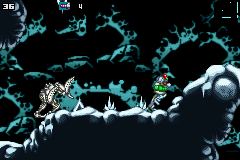 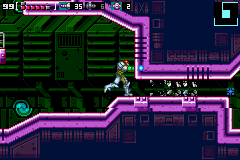 )
37% in 0:28
Read More
For a contest hack, and probably the first real ZM hack, I'm fond of it. A little bit of backtracking and difficulty stopped it from being better, but I like it.
By thedopefish on Mar 15, 2017 (

It looks nice and fits the "frozen" theme quite well, though there wasn't much in the way of thawing. I liked most of the level design, and the layered secret thing is cool (especially since that's a technique you obviously don't see in hacks of SM). The lore explanation of "Gravity Suit" is cute. Glowy MechaRidley and ultraglowy escape is great.

I got trolled once, when I found an eye door at low health and decided to backtrack all the way to the previous save room to be safe, only to go back around and through the eye door to find... another save room.

Mecha Ridley kicked my ass when I first found him, so I spent more time exploring and finding additional items (including the "secret rooms"). At that point, I still died a couple of times to Mecha because I'm bad, but the difficulty felt reasonable. You still might want to tone him down in order to let less skilled players realistically beat the hack under-equipped.

The Kraid fight was tedious because I ran out of missiles and had to farm a lot of fingernails, but he dealt so little damage that there was never any threat.

)
100% in 1:28
Read More
I actually liked this hack a great deal, enough for me to actually put the effort in to complete it. True, I did have to ask for some help for the last few items, such as with the shinespark puzzle in order to get Power Bombs, which resulted in giving accessibility to more bosses than would be necessary to simply beat the hack, as well as with locating that last false block area, which had no real hints as to its location. I didn't particularly like the message areas, but one of the two is supposedly going to be removed, so...

Also, like dopefish, I loved the lore explaination of the gravity suit not affecting the frigid water, which allowed for having gravity be a recolor of varia, and the final suit being able to go over actual gravity. Something that I was disappointed by, was the lack of the space jump, after getting all the other upgrades available. Maybe there could have been some secret area accessible after getting Screw Attack, but I suppose it wasn't truly necessary.

In short, this was a wonderful Zero Mission hack, and I hope to see more like it in the future.

)
100% in 0:00
Read More
Has it's issues, but imo the first interesting zm hack around. Biggest problem is that there's only one ending that features t-swizzle
+ visuals
- underutilization of taylor swift
By enajor66 on May 10, 2017 (

)
98% in 0:33
Read More
I really enjoyed this hack. The difficulty curve was not to steep in comparison to ZM. I got all the upgrades but one expansion (grrrrr...). Kraid was as difficult as in ZM, same with Ridley. Also, I really liked the recolor of the suits and the cheeky explanations of the items were funny. The enemies were recolored spectacularly and Meca Ridley and the Motherships rainbow flashing reminded me of super Metroid, which was awesome. And the tile choice DEEPLY moved me.
By Fauxiey on May 19, 2017 (

)
100% in 0:38
Read More
Overall a very well made hack, it's not too hard and it has its amounts of exploring in it. I would recommend this to practically anyone interested in ZM hacking.
By jewelediris on May 30, 2017 (

)
88% in 0:34
Read More
I enjoyed this hack. I haven't been able to come across very many ZM hacks, but the feel of this hack came together well. the theme, color motifs, and gameplay all work together well. It felt like a fluid experience. I enjoyed the feel of being plopped down in a world, a frozen world, and I was thrust into a situation where I thought, "well gee where do I start looking?" I didn't find it too difficult to find most the items. like any good exploring game, I think its the mark of a good exploration game if you have to scratch your head and wish you had a map at least once. I thought the secrets were well hidden but not too difficult to find.
By DarkOmega6666 on Jul 06, 2017 (

)
100% in 0:17
Read More
So this hack is gud. Even though it's gud it's really short. I beat the game 100% with a timer of 17:05. The areas and the graphics are gud. The git gud room is nice though i already got gud. The secrets are gud for a short hack. Ridley is really easy. Just use a charge, long, wave and plasma beams. Kraid is also easy like in the original. Imago isn't even needed to explain. Mecha Ridley is srly easy. The layout of the map is nice... Except the part where you randomly skip a part of the map to fight Kraid and get screw attack.
By Zexis on Aug 26, 2017 (

)
100% in 1:20
Read More
A short and sweet icy romp built on Zero Mission. As Captain Glitch's big debut and under contest time restrictions, it would probably be tightened up today with a kinder schedule. You've little to lose by opening up Deep Freeze, so go try it out.

)
100% in 0:53
Read More
This was a very well made hack based on the tools that were available at the time. With the perfect mixture of meme and seriousness to make me fall in love with this and attempt 100% on both normal and hard. Only thing that annoyed me in this hack was the Shinespark Puzzle to get a Power Bomb expansion and most of hard mode (Which is to be expected).

I highly recommend this to anyone who loves Metroid Zero Mission and is looking for a cool spin on this already amazing game.

)
61% in 0:32
Read More
A short but very fun hack. Just beat this today. There were lots of nice goodies in every nook and cranny which made exploring everywhere feel fun and rewarding.

It seems as if there is a considerable degree of non-linearity, as I beat the hack without fighting Kraid or Ridley at all. Might have to go back in and look around more, as other reviewers (and the screenshot) are suggesting that they are both in the hack. It also seems as if there are a lot of other items that I missed as well.

I'd definitely recommend you check this out. It's fun, not too hard, very good looking, and creative. Quality control is also good, I didn't notice a single tiling error or anything.
By Keaton on Sep 27, 2018 (

)
No completion stats.
Read More
Short, but super fun hack beat this today. Mecha was a little bit difficult. Another difficult part was the escape it was cool, but the bomb paths were not always obvious.
By alexman25 on Aug 14, 2019 (

)
42% in 0:27
Read More
The first Zero Mission hack that can be considered nothing less than great. The new palettes are very nice. The theme is spectacular, and the layouts are very good.

Everything looks very nice and feels organic, and brings back the feeling of just being able to explore a new map.

Being the first Metroid ROM hack I've played a few years ago, nostalgia certainly plays a part in my view on this hack, but I genuinely believe that it deserves it's praise.

While there are newer hacks that are arguably better, I think this one deserves that extra 5th star for helping kick off the Zero Mission hacking scene and indirectly bringing said hacks into existence.
By Contendo on Oct 12, 2019 (

)
No completion stats.
Read More
First good Zero Mission hack that got released. You got gud.
By Sapphron on Dec 21, 2019 (

)
98% in 0:47
Read More
Really good ZM hack, especially for being so old.
Gimmick of everything being frozen was cool. Palettes were great and frozen enemies were cool (pun intended). Item progression was cool too.
Epilepsy mothership was not cool though. Knocked down to 4 stars for that.
Finished.
By catroid on May 04, 2020 (

)
98% in 0:33
Read More
This is a perfect hack. My only complain is that one of all the endings is unchanged, but other than that, this hack is just fantastic.
By LetsPlayNintendoITA on Jul 06, 2022 (

Read More
A very nice quick hack, made with passion, that has multiple paths, lots of secrets, and an unexpected ending that can be prolonged if you know where to look. very good job completed 100% as usual! very nice visuals, changed intro (very cool effect imo). makes me wish for more!
By Zincoshine on Aug 01, 2022 (

)
96% in 1:02
Read More
This is a really cool mod with well done custom sprites, tiles, and music. It has a number of issues with the level design, camera problems and a semi-softlock. However the semi-softlock will almost certainly only be discovered by those who know how to escape it (you need to wall jump). As well as an unchanged title cutscene. The only other problem is the awful decision to change the color of the rooms on the map to the same color as the map background. Still, I find myself unable to stop playing so this mod is clearly doing something right.

Edit: I've completed the playthrough now. Unfortunately, I ran into major gameplay design issues at the space pirate ship and was forced to rewind back to a save I made before I even killed Kraid. I couldn't simply go back as there was no way back out the way I came in. At that point I decided to just find the quickest route to finish the game and be done with it. Combined with the aforementioned issues mentioned earlier I no longer feel comfortable giving this 4/5. However, the recommendation remains.