Description
Under a new leadership hierarchy, the space pirates have remade themselves as a legitimate, law-abiding organization, and have rebuilt their base on a new Planet Zebes. But, there was a problem... the company they used to build the base was headquartered in North Korea, which violated Galactic Federation regulations. It's up to Samus to destroy the base and, if possible, identify the new leader of the space pirates and collect all 103 upgrades within the compound.

...
Note: Missile counts in screen shots are not accurate

...
This is my first attempt at hacking, and it's been frustrating, but ultimately rewarding. This is a very unpolished hack, but after a lot of help, it functions as intended, with very little that I wasn't able to make to my liking. My main purpose when I decided to create a hack was to make it easy to beat, hard to beat quickly, and most importantly, fun. I'm happy with the results, and I hope it's an enjoyable experience for anyone who plays it. Lastly, I wouldn't have been able to make this without enormous amounts of help from Leodox, as well as lots of help from the devoted and awesome community here at Metroid Construction, some great videos by Shadow and MetroidMST, Grime's Mod Manual, tips from Person, and testing and better box art by GoopQ. Thank you all so much. You've helped me more than most of you will know. Creating a hack was just a pipe dream at one point, so it's a little surreal and really satisfying to have actually made one. With that, I hope you enjoy Super Metroid: Hermit Kingdom. 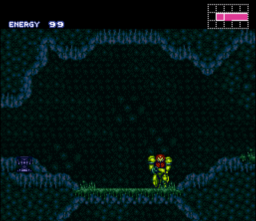 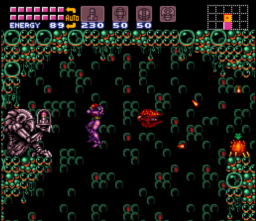 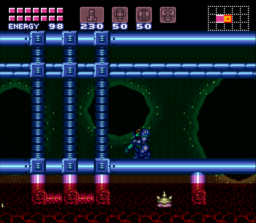 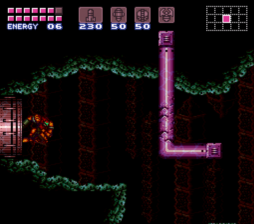 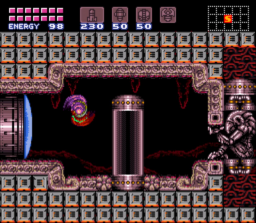 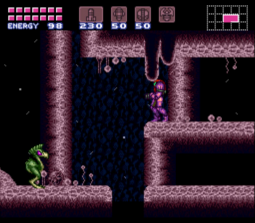 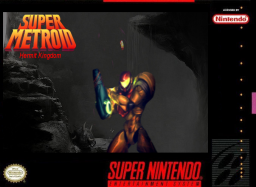 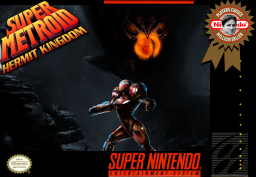 )
85% in 0:00
Read More
This is a halfhack that throws some unexpected twists at the player, and probably the most creative use of Crocomire in any hack. Also some nice little bits here and there. In the end though, it's not much more than a fairly well done halfhack. The one really interesting thing happens in the early portion of the game, and the back half is quite probably going to be bogged down by searching for one item.

It's a fairly solid hack and decent entry into the Super Metroid hack world though, and for a first hack it definitely shows some nice promise.

Rating for some hacks may be off by 1 Star, but arguably not more, and ratings are not attempted to be provided within the precision of ''half orbs''.
By Croakomire on Nov 24, 2017 (

)
88% in 3:10
Read More
For a halfhack this is quite well done, for a first hack this is quite well done, throw those two factors together and you get a very well done creation, although, that doesn't keep it safe from critiquing. This hack does a great job of throwing some random but fun things at the player, the most noticeable being the bosses and mini-bosses, crocomire for example throws a massive curve ball at the player, The save stations are also very unexpected. The design choice is nice in a lot of late/mid game rooms, but the beginning just seems like either nothing was changed or a cluttered mess. Next up, I think the amount of trolling performed on the player is executed close to masterfully, The amount of speedboost blocks might get a little excessive, but it's a great build up for when you finally get speedbooster, you feel like you can go anywhere. Not to mention that if you mess certain tricks up, there is some backtracking, but they're done at just the right lengths that won't make a player go insane if they choose to try. Lastly, the skills needed to beat this do exactly what the description says, you don't need any fancy tricks to beat it, but if you want to be a completionist, the tricks make it just that much harder to go fast. But that also comes with a price, even regular players might find it hard to go fast, there's a little too much searching for items just to have them be useless minors, not too much to make the hack un-enjoyable, but still. All in all for the factors this hack was created with, it's a decent halfhack that does a wonderful job showing the progression of a hacker, with a few glitches and flaws here and there, I'd highly recommend it.
By PassivePac-Man on Feb 18, 2018 (

Some items were hidden very well, however, even some that you need to finish the game. I spent a good hour looking around for a single item that I needed to move forward.

Very interesting boss and item order. Crocomire and SpoSpo locations were really surprising.
There isn't that much to criticize other than well... that it's a halfhack and that Speed Booster was in a location that didn't even cross my mind until I got back to it and the solution to get it isn't that obvious at first.

The game isn't particularly difficult other than finding Speed Booster and some optional Shinespark/Blue Suit challenges. You'll likely find yourself with more Energy Tanks than you will ever need as they get basically thrown at you.

)
No completion stats.
Read More
Very excellent! The pacing is great and I had a lot of fun. Despite being a half-hack, the method of play feels like a nice change of pace from vanilla. Additionally, I felt the difficulty was well-dialed-in. I really enjoyed a lot of the tricks this hack asked me to perform. The discoveries it enables feel nice.
By caauyjdp on Jul 11, 2020 (

)
90% in 4:48
Read More
A bad halfhack.
Lots of one way passages which force you to do a huge loop to get back. Some speedblocks that either mean that you're supposed to have a blue suit/do a short charge into mockball/that it's an exit/that hack is unfinished? One room pretty early on strongly hints that it's there for players to get spike suit, which I didn't learn yet. Maridia without gravity is forced, but there's shit ton of platforms added, so what's the point?
Found one broken door which leads into solid blocks, and one out of bounds.
Ketchup beam was nerfed into nothing?
Hack tosses you into rooms from other areas without even bothering to make them fit current one.
Map doesn't save properly. Has at least 4 etanks more than vanilla which leads to garbled hud gfx.
Got tired of this hack by the time I was done with brinstar.
By Pixel_Tiger on Jun 24, 2021 (

)
93% in 0:00
Read More
Decent vanilla half-hack with interesting rooms and routing. Not sure if fighting draygon first is the intended strat... if not, then sequence breaking is with no doubt possible (phantoon or even kraid first is also possible imo).

Escape offers enough time to get stuck for a bit even with the standard 3-minute mark. Very nice work for a first hack!
By Kremit44 on Dec 12, 2021 (

)
88% in 2:45
Read More
Half hack with some interesting mechanics and moments. Largely vanilla rooms rearranged with occasional modifications. It's fun and well made but it's certainly nothing special either. It's a fun casual playthrough with some optional puzzles that cater to experienced Metroid players.
By Sapphron on Feb 13, 2022 (

)
% in 0:39
Read More
Really open halfhack with quite a few changes and rearrangements. Quite a bit to do in this hack. Good for Kojakt's first hack, but I do wish there was more.
Finished.
Recommend as a halfhack.

note: This is retroactively reviewed, from February 24, 2019
(stats taken from my speedrun)