Description
Explanation :
Shoot rinkas and you'll get the point.
Game Over : Life is 00.
< screen freezes -> save screenshot (if you want)-> START button >
Pick up items and survive!
Difficulty : SAMUS A(hard), B(normal), C(eazy) 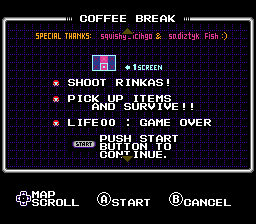 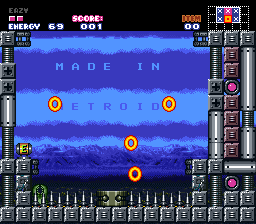 )
No completion stats.
Read More
Possibly the most unique hack in existence. There's nothing quite like a Metroid arcade game. An excellent way to kill an hour. The only flaw is that one you've completed it once, there's little to no replayability. Still, I've gotten more enjoyment out of this silly little hack than out of the vast majority.
By Cpt.Glitch on Apr 07, 2015 (

)
90% in 0:09
Read More
Yes, you can beat this hack. It is so unique. You'd think a one room hack would be horrible in general, but not this hack. Even when locked in a 1x1 area this hack has tons of replay value. The three difficulty modes keep the challenge fresh once you master one of them. You win by killing rinkas and collecting the drops the give. But beware, its not as easy as it sounds. 1000 pts to win!
By FullOfFail on May 18, 2015 (

)
No completion stats.
Read More
A very unique and interesting display of ASM. For what it is, it's just so well done.
By CrAzY on Jun 07, 2015 (

Read More
More Items technically can be collected without major glitches.
No animals to be saved.
Chose Hard Mode.

)
No completion stats.
Read More
This was a very unique hack in so many ways. Its simple design eliminates some of the inherent confusion that comes from playing Super Metroid in its tradition open-world layout. At no time did I feel like I was lost or wasting time, for good reason. Definitely worth playing. 8/10
By Shadow96 on Apr 21, 2017 (

)
80% in 0:06
Read More
Not a bad quick hack, reminds me of an old arcade machine. Bored? just slot in your quarter and have a go at it.
Fun to play when you're out of things to do or maybe want a quick speedrun. The design is neat and new, overall not too shabby
By Daniel94Gomes on May 12, 2020 (