Description
From what I can remember, there was only one clear goal in mind when creating this (here it comes) half hack: to make the most extensive one there has been thus far. I also tried and succeeded, hopefully, in designing ahack where non-linearity, linearity, and difficulty are pretty balanced. No one room has been untouched. Every item has been repositioned. I've even tried to implement some things I've never encountered in a hack before.

The difficulty isn't as bad as the name suggests. It's not quite as hard as the Cliffhanger HV, nor is it Golden Dawn-easy. It is not necessary to use IBJ, short charge, or DBJ at any point to complete the game. You will, however, need to use the quick charge technique, mid-air morph, some precise walljumping, and shinesparking skizzles. I'm not making any promises on the difficulty of 100%, though. :) In fact, I'll recognize anyone who is able to get more than 90%. Major thanks to DMantra for bughunting and putting up with some pretty bad crashes and bugs. 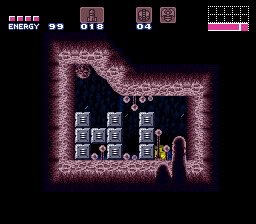 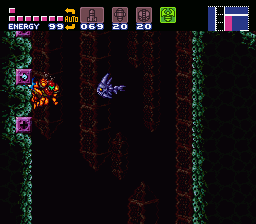 )
No completion stats.
Read More
WOW, just WOW. This is my first hack out of like 20 hacks that I finished which I had to stop playing.... it's just BAD. The idea behind it is not that bad to be honest, but everything else... just disappointing.

One room after another gets worse... and worse and worse by the minute. Bad enemy placement right from the start makes this unenjoyable without abusing savestates.

Did I mention I did a hell-run with just 2 f***ing E-TANKS into crocomire's lair!? Oh, and you will find yourself spending alot of time on enemy spawns just to refill your shortcoming on missiles while we're at it.

Worst changes I encountered in this SHORT "playthrough":
Green keyhunters.... not killable with missiles, just charge beam... charge beams location ... very bad room, oh and after crocomire's lair you enter a room with a dozen slimes... WELL HAVE FUN but I'm out of this shit
By Sapphron on Aug 13, 2019 (

)
65% in 6:15
Read More
High quality challenge hack...but not as good as Cliffhanger Redux.
This hack doesn't rely on spikes all of the time, rather on precision walljumps and quick thinking. I really liked what it did different from all those bad challenge spike hacks, similar to Cliffhanger Redux in that way. However, it puts an amazing spin on vanilla SM..
The progression is very unique, sadly the game sometimes makes you think that you might need x item to get past this blockade, but you can actually make it past/head another way. Somewhat confusing at parts. Enemy vulnerabilities are changed, so Screw is not nearly as powerful as it usually is.
It is a very difficult hack and requires a few hellruns, the first one being very tight. You're not locked off from different sections of the map like you are in Impossible, like you can go back to Green Brinstar after you have Power Bombs.
Despite being this open, I was not able to find any easily doable sequence breaks. However...I did manage to break the game open with a couple very obscure/difficult breaks. I am very sure that neither of these were intended because I had gotten a few items seemingly in the wrong order.
Lower Norfair was very difficult and had a few water rooms that I thought were barely possible w/o Gravity Suit. However, I was probably overcomplicating it by a lot.
The layout is altered so much from the original, but you can still see which room is which. Different rooms link up to other rooms, so you don't always know what room you're entering which was a really nice touch. And the minimap is changed! Rejoice!
Something I really did not like were the mazes, particularly the maze outside of the attic of Wrecked Ship...it's too long and there are spots with crumble blocks, you have no Spring Ball so you have to time it very precisely which gets obnoxious after a while. I had to end up savestating for one section of it because it's nearly impossible to roll across 2 crumble blocks straight with no speed (I eventually ended up using ceiling IBJ). Only savestate that I used, though.
There's a decent amount of suitless underwater, but not that much, and your reward for it is pretty great. Has some nice puzzles.
Lastly, there are a few permastucks. I only noticed a few in the really late-game sections, but they were pretty far away from a save so I had to repeat the boss I was fighting. Be careful near Plasma room + some of Lower Norfair.
Overall, if you're looking for a good challenge hack, you've found it. It's totally worth a go just to see all the cool things that were done to this hack. I recommend Cliffhanger Redux over this, but this is the next best option so far.
Edit: This can be compared to Super Metroid HOTA, but as a less puzzly and more execution-wise hack.
By Sickwood on Apr 12, 2021 (

)
94% in 9:14
Read More
This is quite a hidden gem among the challenge and half-hack categories. It's more like a "3/4" hack with drastic layout changes and different area connections. I liked the puzzles for the most part and item progression was very unique considering the age of this hack. There were many, many random permastucks though. Tourian wasn't changed much, but had one of the tightest escapes ever. Hack got a little stale by the end so gave up on 100%, but overall it's one of the best effort half-hacks up there with (but not better than) GR2 half-hack.