- How to use
Patch over a headerless Super Metroid JU ROM.

- Different specifications
* No Ceres station
* Certains room connections were changed although it is a half-hack
* Some beams have increased firepower
* Shinesparking doesn't drain energy, it can performed below 29 energy and you can even cancel it anytime by pressing DOWN button
* Gravity Suit doesn't half enemy damage (but it works normally against spikes and other hazardous terrain)
* Space jumping behaves in air like in water (mash JUMP button!!!)
* X-Ray scope range was changed
* Spin jump restart can be achieved by pressing the jump button again in the air

- New Status Bar
Design of the status bar at the top of the screen was changed, you are now able to view the following three types of information in real-time
(1) Play Time
(2) Key Inputs
(3) Charge Beam & Speedbooster gauges To switch between them, press L, R and Item Cancel buttons.
However, display is not updated during certain game sequences (pause screen, item-get message boxes, going down/up an elevator, etc.)

I would like to thank people who made these patches and hacks. 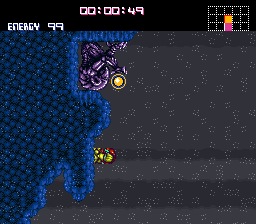 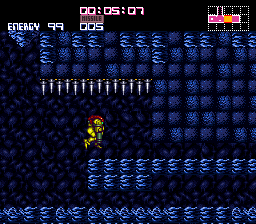 )
No completion stats.
Read More
This hack has a lot of neat things, but also a lot of annoying half-hacky design quirks that make you not want to play it at all. Just keep in mind that one of the inspirations for this hack is Super Metroid Impossible.
By caauyjdp on Jan 21, 2021 (

)
78% in 5:20
Read More
This is a challenge half hack for experts only, think Kaizo difficulty but for Super Metroid. You won't necessarily die a crazy amount but many platforming and exploratory challenges will test even the best Metroid players. For what it is it's pulled off rather well and has some cool features that are distinct from vanilla. There are a few tricks that are just absurd but most aren't needed. Some stuff is more annoying than hard but nothing too crazy. Gravity isn't as bad as it seems, if you can get the short charge it's actually a pretty easy mockball. I did think I was stuck getting into Tourian but there is another route that I thankfully had enough pickups to take. Boss fights are plentiful and difficult with some hilarious but also depressing surprises. When at the end of the game you get the ultimate power, lol, and you can even take it back through the hack. I didn't do it other than to check if you can but one could certainly buff their collection rate this way. It was fun to escape and save the animals like a boss.

I had fun overall and although this is a half hack it managed to do enough impressive stuff to set it apart aside from just it's difficulty. Although it will appeal to very few I do believe that for the few who are capable of playing such hacks it manages to be a reasonably well designed game. I used save states to save time on restarts when pulling off some difficult tricks and I'd imagine save state-less is a feat best reserved for only the very best SM players. If you're new to challenge hacks I'd suggest Cliffhanger Redux over this for a challenge hack but this is pretty decent for what it is. Time is in game timer but was certainly much higher in terms of real life time.
By Sickwood on Apr 27, 2021 (

)
99% in 7:05
Read More
I usually avoid half hacks unless they are challenge based like Precision, but this half hack is really good. Had this author put his talents and coding skills toward a full hack, it could have been a SZM quality hack. Tons of custom code, fun and challenging puzzles, maximum use of the map, and plenty of sequence breaks to be had. The HUD is spectacular with more selection options than is imaginable. Bosses are hilarious in most cases (except Phantoon's room layout) and catch you off guard. 4/5 purely because it's still a half hack, but has 5/5 effort and things that could be applied to a SZM type sequel that I still hope happens one day.
By Sapphron on Dec 06, 2021 (

)
87% in 3:56
Read More
This is an excellent hack with a lot of ASM and love put into it. Even though it's a total halfhack it changes around nigh-everything that you can do, while still maintaining a major amount of non-linearity which is always welcome. Multiple ways to get to each item, and things usually aren't locked off. I had a hard time finding supers and to speak to that nonlinearity that didn't matter at all in the long run. Custom text and the HUD is very welcome making the hack feel quite original on top of everything. Highly recommend if you want a challenge and have decent knowledge of Super Metroid's tech. Unfortunately, there are a few glitches, potential softlocks/permastucks and stuff that hasn't been totally ironed out, and the fact that it's also a halfhack holds it from being a 5-star hack.
Finished.
Recommend.
By dagit on Sep 04, 2022 (

)
83% in 8:24
Read More
This one is hard to review. At first I was stuck. Like really stuck. And that was making me not like the hack. However, I eventually got the ball rolling and found enough gear to be able to do some basic exploration.

I liked the creativity of the puzzles. This is a unique hack, at least compared to everything that came before it. The biggest negatives were that sometimes things were just too cryptic and obtuse and in some places boss fights were a really bad difficulty spike (in an unfun way). I only used save states at the very end. So it's not like this hack is out to murder Samus all the time. Just in a few key places.

Overall, I think I would recommend this hack but only to experts that like a good puzzle and a good challenge. Definitely not a hack I would recommend to players in general. I don't know if all the weird tricks and glitches that I did are required, but I do believe this hack requires fairly deep knowledge of SM quirks.

BTW, the time listed is my in game time. Real time, this hack took me a bit under 13 hours to complete. I don't have the exact time handy because my computer crashed about 20 minutes in and I had to reboot and lost my timer.

I want to give this a 5/5 for creative puzzles. However, due to the difficulty spikes, and depth of knowledge required, I feel like I shouldn't give it more than a 4/5. Moreover, to avoid a situation where relatively inexperienced players pick this up and get frustrated because it's beyond their knowledge of the game I feel that I should give it a 3/5. Just know that I'm really torn about rating this one.
By Zincoshine on Sep 21, 2022 (

)
No completion stats.
Read More
With a name like "GR2 halfhack2" you can already tell that this is a hack that has literally zero amount of effort put into it. It almost feels like it is supposed to be some kind of parody of some sort. You can't even leave the damn landing site! To be honest, KPF gave a better review but it was in violation of the rules and got removed.... so here is his review, but edited so as to comply with the rules of the website: