1.031 is recommended. There are a few tweaks (stronger beam, more less obvious hints, better drop rates, a fix or two to rooms. and a bonus energy tank!)
Insanity patch is the original, and features a room that can be a permastuck if you suck at item management.
And a map patch! The map patch must be patched over the already patched ROM (hence the size) :lol:

Story:
With almost all of the Metroids wiped out, the scientists at the colony of Ceres conducted many experiments on the captive baby Samus delivered to them. The results of one of the experiments in particular fascinated the researchers; the Metroids had a staggeringly high energy output. The power generated from a single Metroid larvae could be harnessed to power an entire city. However, the Metroids were also highly unstable and any form of interruption to their flow of energy could trigger a cataclysmic explosion. The scientists sent the Metroid to power a small colony near Ceres, to test the real life application of their new found knowledge.
All seemed well for some time, however less than a month after the Metroid was delivered, the Galactic Federation recieved a distress signal from the colony; they were under attack!
The GF contacted Samus immediately, for she had the most experience with the Metroids. Not one to turn down such an offer, Samus immediately left for the colony to discover what was amiss.


SPECIAL NOTE:
If you don't backtrack you'll probably die. A lot.
Special thanks to Quote for the timer patch. ^_^ 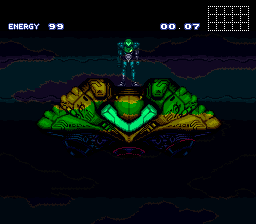 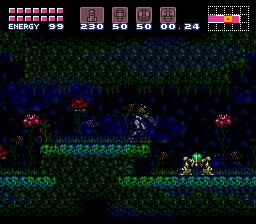 Backtracking is recommended or you will miss items and get to Ridley underpowered.

Would have been better to place an eye-gate before Ridley to let people know. Stumbled into him without fully refilling in the previous room and without Spazer and Gravity Suit. Since I didn't want to restart the hack I had to cheat in the boss fight.
By Daniel94Gomes on Nov 15, 2020 (

)
No completion stats.
Read More
Not sure why this was rated so low. It felt like a mini version of "Airy" with a nice item count. Enjoyed it.
By Sapphron on Dec 04, 2021 (

)
29% in 0:24
Read More
Good hack! Quite short and like the description says backtracking is recommended. I stumbled right into Ridley which wasn't too great but only lost a couple of e-tanks. Players with less experience will want to explore a lot. Colors are a bit dull as a result of being so dark and the reliance on sidehoppers isn't the most fun thing, especially the giant desgeegas taking a whole tank of your health. Overall, a pretty good short hack but a couple flaws for sure. Lack of saves also doesn't help.
Finished.
Recommend.