Description
Story:
I first found myself in some weird research lab. It was there that I found remote bombs and nuked the place. Then I destroyed a bunch of ice demons or something on some other planet and stole a spaceship.
After the theft I did a metric ton of other things, destroying a bunch of planets in the process.
Now I just want a peaceful vacation.


This hack has quite a few ASM changes, most notably the shop system. Yes, shops in Metroid! You will need to learn to use a new mechanic to get 100%, but it's not mandatory to beat the game.
Difficulty-wise this is a little bit harder than vanilla I think, but no fancy tricks are required.

Prepare to go insane from that music, hehe. 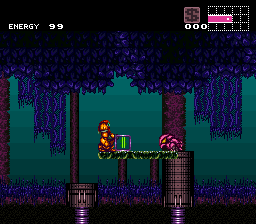 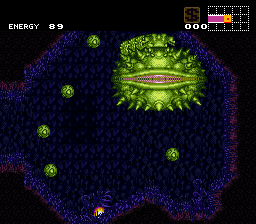 )
87% in 0:47
Read More
The shop is very cool, there's a couple of neat puzzles, and there's hidden stuff EVERYWHERE. The boss fights are all amazing (custom music, custom intro text, and some twists).

Be warned that the music really will make you go crazy after a while. Also there's a fair bit of suitless underwater, if that's not your thing. Most enemies don't actually drop money, so you'll either need to find a bunch of hidden cash items or farm an enemy that does drop money in order to afford all the cool toys. Also yes, the shop is the only save point and it does cost money to save, because Smiley hates you.

)
No completion stats.
Read More
That music is ingrained in my head. Even now I can still hear it. And it is awesome.

The shop is a nice addition even if paying to save is a bit much. That said, it's not hard to gather the funds.

A nice collection of items hidden around the place as well as fun bosses with interesting music (yes, there is more than one track).
By MetroidMst on Mar 31, 2015 (

)
100% in 0:53
Read More
Now is your chance to make actual money as renowned bounty hunter Samus Aran. But make sure to hand the money over to the Space Pirates for some reason. The mad genius of Smiley should not be questioned, it should only be experienced.

The bosses are radical beings, there is a secret 100% ending, there is music that will drive you crazy, and you can even get Samus drunk.
By Cirno on Apr 06, 2015 (

)
No completion stats.
Read More
I had a lot of trouble getting the shop to even work, which made for a frustrating first experience. The suitless underwater parts weren't really my thing, but still, this hack had a lot of silly little things that made it fun.
By Aran;Jaeger on Dec 07, 2016 (

Rating for some hacks may be off by 1 Star, but arguably not more, and ratings are not attempted to be provided within the precision of ''half orbs''.
By SnakeLancer on Jan 07, 2017 (

)
No completion stats.
Read More
Why is it that the first looping soundtrack had to be "Remove Kebab" ? https://www.youtube.com/watch?v=ocW3fBqPQkU

)
No completion stats.
Read More
This might be my favorite hack! It's certainly in the top two or three. Conflict is such an anomaly that it's hard for me to say much about it without giving things away. For me, it feels like this hack is playfully mocking the player, the original content of Super Metroid, and anyone who has ever taken a game too seriously, and possibly even the creator himself. Take all of the great design aspects of the original game and mix it with the absurdity of a game like Katamari Damacy or Mount Your Friends, and that would be how I would describe this hack without actually explaining the point of it. Also, it has the best soundtrack of any SM hack. (This is not an opinion. There has been research backed by mountains of empirical evidence that exists only in my head to back up this claim.) This is a hack that has flaws, but I couldn't care less. The whole experience was just too enjoyable. It also has the best soundtrack, and the best soundtrack. Get where I'm going with this? Go play this hack. 9.5/10
By BFrobber on Mar 05, 2017 (

)
No completion stats.
Read More
This hack was incredibly fun, but disappointingly short. It's like a mini-hack, but with enough work put into the assembly, aesthetics, and game dynamics to justify a whole full-size game redesign. I felt like I was really getting into it only to find it end suddenly and unexpectedly. The world and gameplay is REALLY different from the original game. It took some getting used to. I died a LOT right at the beginning, but once I got the hang of it it was straightforward, even too easy.

The shop is one of the highlights.

* Really silly in a fun way. The game made me laugh several times.
* Challenging in a pleasant way. There are several enemies that will throw you for a loop and require some thought to overcome. I felt like I had to develop some new skills and strategies to play this.
* Significantly different from the original game. The coin / shop dynamic makes it play a little like an RPG.
* Familiar bosses have some pleasantly surprising twists on them that make them fun to fight and demand new strategies. The bosses are just at the right level of difficulty to force you both to explore the world to get powerups, and to get you to examine your strategy critically.
* TONS of secrets...and both small secrets (extra ammo and coin) and big (a hidden area with a boss and major upgrade.)
* Areas need to be revisited, some multiple times, to get all the items.
* Some items require significant cleverness to get, including exploitation of new game dynamics that did not exist in the original.
* I love the look-and-feel of the outdoor area, with the beach moving into the ocean, and the forest.
* The underwater area manages to feel and play TOTALLY different from Maridia. This is a tough accomplishment; good job.
* I know people complain about it but I really like that music.

Cons:
* I thought this was a bit too hard at the very beginning (those hoppers are brutal when you only have the starting equipment, and the fast crabs are hard to dodge and inflict crazy damage) but too easy at the end.
* There is a glitch / broken strategy thing on the final boss in that there's a place you can stand where you can't be hit. This needs to be fixed. The boss is way too easy if you find this spot.
* The new game mechanic to break those mystery blocks is a bit hard to discover. The game could do a better job of cluing you into it.
* WAAAAAAY too short. It took me less than 50 minutes to beat the game the first time through, with 70-something percent items (forget the exact stats, I think it was around 48 min. and 73%) For the incredible assembly work, the new concept, new game mechanics (all of this stuff seems HARD to make in a hack), new graphics and look-and-feel of the world, all this hard work seems under-utilized. The game also under-utilizes the existing material in the original game -- it only uses a fraction of everything, from the tileset to areas to enemies to items. I'd love to see a hack like this, but on the scale of the full original game. I think you could make a whole area out of that forest concept with things lurking in the shrubbery (that one room felt totally different from green Brinstar). And maybe that hallway with spikes could be developed into a dangerous (and scary) new area of the game too.

I would love to see someone build on this hack. It is incredibly high-quality and has huge potential. It just is soooo short, which is the only reason I am giving it 4 stars out of 5.
By metasamus on May 19, 2020 (

)
85% in 0:33
Read More
Some neat stuff here with cool bosses and an interesting shop gimmick. It's ultimately too short and grindy when it comes to collecting money for me to strongly recommend.
By therealsusan on May 06, 2021 (

)
75% in 0:45
Read More
Wouldn't have even played this, except I watched someone else play it on YouTube (just didn't think spoof category would interest me)

Thank god I don't have speakers on my computer lol

Really surprised nobody else has used the shop mechanic from this game in another hack.

)
No completion stats.
Read More
A smiley hack through and through. Lots of hidden items and plenty of ASM stuffs. I do wish it was longer, though.
Finished.
Recommend.