Description
AngryFireChozo is a hack I started April 2nd as an outlet for level design, and with the accidental creation of a glitch in the physics system. I originally intended it to be a few room hack, but I just never quit building it. After about a week, I decided to make it to be quite a nice size for a 'minihack', and started on a building spree.

As it was built in such a rushed manner, I didn't have much time to test it completely, so there may be game-breaking sequence breaks or other flaws that I haven't discovered. I believe I went over every roomstate for problems that way, but it's hardly recieved a proper beta-testing. I'll do my best to fix any major issues as they come up.

Being rough and unpolished, it's difficult, especially in the exploration department. A large part of the world is hidden, and the enemies themselves are tough (with the big boss being insane). You also will have to figure out several things involving the physics, and until you learn how to work them, things will seem slow.

Unless I miscounted, 100% is the max attainable. It can be completed with far less, but aforementioned big boss will probably trash you if you try to run through with as little item collection as possible.

No saves except the ship, so I'm afraid you'll have to use savestates. 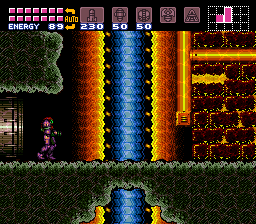 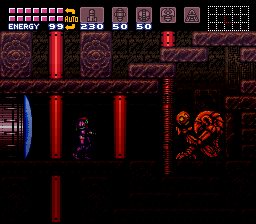 )
No completion stats.
Read More
Super Metroid always needed to be floatier
By squishy_ichigo on Apr 11, 2015 (

)
No completion stats.
Read More
The floaty mechanics this hack has makes it one of the most annoying hacks out there. Don't get me wrong, it's still a pretty good hack nonetheless.
By Aran;Jaeger on Dec 08, 2016 (

)
No completion stats.
Read More
The map design of this hack is lovely, but physics is a real turn off. Would love to play this hack with traditional physics.
By Kandier on Feb 23, 2021 (

)
No completion stats.
Read More
This hack is trash, it has graphical issues, just at the beginning, the ball doesn't see & those issues continue, you can see Samus running in the air... & of course, physics are shit!, but, even if it would have normal physics, it would still be trash
By Sapphron on May 19, 2021 (

)
58% in 1:31
Read More
I-what? What is this hack???
The description of this hack being quite difficult and cryptic is 100% fitting. Thanks to Aran for his video, used that to find Wave Beam and a few early major items.
The physics are incredibly jarring coming from vanilla SM, it's the opposite of redesign. You fall super slow and ascend super slow, with the exception of running jumps mucking that up.
There are many areas to go to and the art is done incredibly well, but it's just...such a tiring journey. I didn't expect to beat this in one sitting, a lot of luck played into that. And the final boss is, indeed, rather difficult. If you're willing to put up with the frustrating physics and really difficult exploration, this may be a really good hack. I like the art, but a lot of other things + the lack of testing really drives it down.
Finished.
Do not recommend.
By JaceTheBodySculptor on Aug 16, 2022 (

)
No completion stats.
Read More
I got to the boss and quit after a few attempts. If I had Charge beam I would have continued grinding because I see a viable strat but without it it would be too tedious to farm his drops.

I recommend this if you are Veteran level and want to have your patience tested to the limit.