You don't need to IBJ any spike mazes either.

Version 1.0.1 has an hud upgrade, & some lesser enjoyable things were fixed. 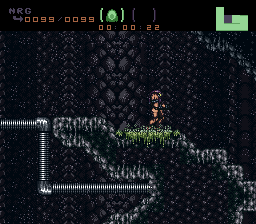 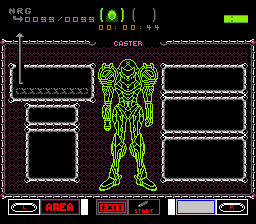 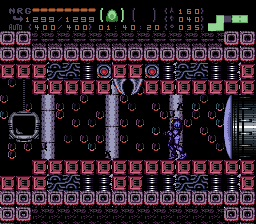 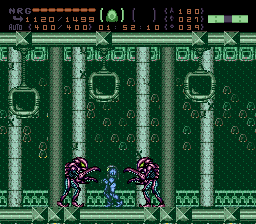 First off, I really liked the new HUD (What's with those screenshots up there showing something different? Edit: Fixed now.), changed beams and graphics. QoL features like quickbombing were appreciated. Item progression was nice though I'm not sure if I was supposed to IBJ (I wasn't.) (in a spot that expected me to have Space Jump.) to get towards Charge Beam which was the only way I saw to progress. Space Jump was also near that so I'm not sure what the intended path was.

The game felt a bit halfhacky especially in the beginning. Many rooms were basically makeovers with door connections being different and a few Norfair and Maridia rooms were moved to Brinstar. Quite a bit of completely new rooms though so it wasn't too bad.

Escape was disappointing. No Mother Brain so after Ridley you just get a timer and backtrack to the ship the same route you came from which isn't exciting. Not a fan of escapes like that.

There were also a few graphical issues in some rooms and the map breaking in one particular situation. Also the music always reset after picking up an item.

Still, it's a fun hack and I recommend it.

)
89% in 2:33
Read More
Really unusual.
Keep in mind that this is a hack of a hack of a hack, originally being Super Metroid Blood -> Super Metroid Blood+ -> this.
Phospho did a decent job fixing up this hack. There's a lot of graphical issues and one softlock if you get PBs early, but didn't find much else.
A lot of the rooms felt very...bland and uninspired. Lot of backtracking for very little reward.
Oh, and this hack has a custom hud and an INCREDIBLE amount of ASM for a SM hack. Way more so than you usually see. So there's some cool stuff there.
Finished.
Somewhat recommend.
By ZeroSuitSammy on Apr 29, 2021 (

)
No completion stats.
Read More
Fun, enjoyable hack. Didn't change anything about the physics and was still very fun to play. It was also nice to look at. The graphical and sprite changes were definitely welcome. It still kept Super Metroid's general theme. HOWEVER, I personally have one major gripe with this hack. I ran into not one, but TWO softlocks. That's two too many. Basically, if you don't have the Ice Beam when you get to Norfair, you're not getting out. And if you don't find the Speed Booster before you enter the Power Bomb block floor on the far left of Brinstar, you're not getting out. It sucks because with Metroid, you could always pass your hidden key to progression and never notice it. You spend hours and hours (like I did) trying to find your way to progress, but unless you use every part of your arsenal on every block in the game (ceiling, wall, or floor), you may otherwise never find it. There's nothing wrong with hiding things and forcing the player to look for them, but hiding things too obscurely will completely discourage the player when he/she gets stuck, and they may drop the game and never pick it back up again. And since this is a hack made by a fan, not a game studio, you can't count on it to be properly play-tested by enough people to work out softlocks in every conceivable path, which is very bad for an exploration game where you're supposed to do exactly that: explore every path.
Long story short, I got stuck in Norfair without the Ice Beam, and therefore no way to defeat the blue space pirates, and no way to open the door on the bottom right. If you open the door on the right end of the hall, there's a room of spike pillars awaiting you that you can't conquer without the Space Jump. My last in-game save was in Norfair, as was my last savestate. So I start all over again. This time I PB the floor on the left side of Brinstar. I get to the spot where the animals are trying to teach me how to shinespark. Guess who doesn't have the Speed Booster? And like with Norfair, if you don't have the right item going in, you won't be able to leave. Couldn't find the Ice Beam, couldn't find the Speed Booster, couldn't find a guide online (because the only person who played it on YouTube suffered from the same Brinstar softlock), couldn't beat the game.
Oh, and there were a lot of midair morphs that were almost too difficult to do. They're so close to the ground that there's almost no time to pull them off. Those got annoying.
It was fun while it lasted, but in short,
Did not finish.
Recommend.