Description
The Ordinary City is under attack by the evil forces of spikes, bubble-sludge and vegetation.
Samus was doing her grocery shopping, when suddenly the bridge was out.
Now she has to fight through the city and clean it from the evil creatures, but more importantly, she has to find a ship so that she can take her groceries home. 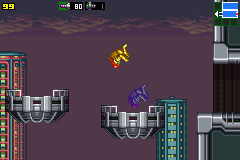 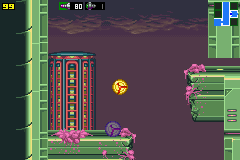 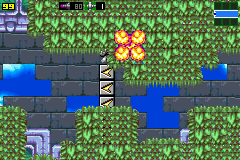 )
90% in 0:28
Read More
Completion time in minutes:seconds.
The speedbooster jump was tough to get used to, but once the Megaman X highway section is over with, this hack really starts taking off. It's a fun little shorthack that can be rather tricky, a known aspect of Ing-ing's hacking. Nonetheless it's fun and playable as long as you know how ZM works. The custom tilesets/visuals are pretty cool, too, even if most of them are just taken from other games.

Also I never got credited for them, but I did three custom music pieces used in the hack; Cinnabar Mansion from Pokemon RBY (item room), Main Theme from Duke Nukem II (tower hub area), and Stage 8 from Contra (beach area).

)
90% in 0:27
Read More
Completion time in minutes:seconds.
One of the more bearable Ing-Ing hacks. The speedjump mechanic was interesting, and opens up huge TAS potential. It's a fun hack, and not as unnecessarily difficult like some of his older hacks.

)
81% in 0:28
Read More
Completion time in minutes:seconds.
This hack is quite fun, has good graphics, neat music, and a well-implemented gimmick. The main thing holding it back is the annoying enemy balancing, especially the final boss sometimes dealing 10 damage and sometimes dealing 200 damage. Beyond that, this hack is great and you should give it a try.

)
100% in 0:24
Read More
Solid Ing hack, probably my favorite ZM one. Has unique physics and good tiling, but a few problems. I found 2-3 permastucks in the hack due to the possibility of not having missiles by the time you fight that guy who hangs from the ceiling (EDIT: use charge). You can also get stuck in Norfair quite often (beachy area).
Overall though, it's a good Ing hack. I recommend it.