Description
Strange things are happening over Europe, and Adam has dispatched Samus to investigate, travel through colorful and dangerous environments such as Space Elevator, Acid Factory and a flying battleship just to name a few.

Features: Exciting Adam conversations! Exciting seven areas to explore! Exciting platforming challenges that put your Fusion skills to the test, will you impress Adam, or are you just another lady who should go back to non-gender-specific tasks?

Note: Requires knowledge of some basic Fusion tricks like Jump Extend and jumping down from platforms. 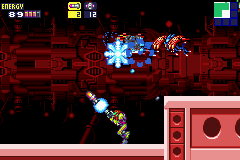 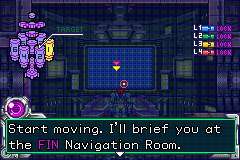 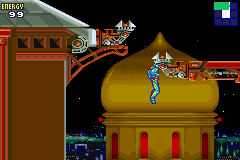 Unfortunately I played this so long ago I forget most of the interesting bits. What I do remember is horribly designed areas at the start, and a more enjoyable experience later on. It's an Ing-Ing hack, you know what you're getting into.

)
14% in 2:10
Read More
Good hack! Has a lot of frustrating stuff at the start, very few e-tanks, but gets better as it goes, mostly after Sector 2. Watch out for the Sector 6 SA-X softlock! Don't let it see you!
I believe max% is 14%?
Finished.
Recommend.

)
7% in 2:20
Read More
Ever since 2018, I've attempted this hack on numerous occasions, only to get frustrated by the beginning sequence and give up. As such, I ended up loathing this hack for a while.
But just today, I've finally managed to not only get past that, but also finally beat the hack. And boy, is it one fine hack despite the trademark Ing-ing style of challenge.
So, to play through this hack, you will most definitely need to know how to slow down your falling velocity in air by repeatedly pressing B and A. I've found myself being able to do this better via a keyboard on emulator, or with the small buttons of an actual GBA (which I've been using to play GBA hacks lately), instead of a controller with relatively bigger buttons like my Logitech F310. Well, either that or just rolling my thumb across the buttons without really lifting it off of them. I dunno.
So yeah, the difficulty, it is indeed challenging, but it gradually gets a bit more lenient as it goes on. Serris, in particular, is nerfed a bit from what I saw, making the fully underwater battle a bit less of hassle. BOX is also kind of easy, probably more so than the vanilla game, just grab the ladder and aim downwards to just shoot him from there.
Now let's talk the heat/cold runs. This hack has plenty of them. It may require some trial-and-error, but the way it works is really just one room of heat/cold leading to a normal room to give you some time to refocus yourself. So I'd say that aspect is pretty well-designed in this hack.
I also thought the part after BOX was kinda neat, having to avoid the Powamps falling from the ship. It almost felt like a minigame.
So yeah, a challenging hack, but a good challenge, as a whole, I'd say. I definitely recommend if you're up for some Fusion action. I also think this is one of the more underrated Fusion hacks, being most likely overlooked because of, again, the beginning part giving it a bad look.
So yeah, nice hack Ing-ing, sorry I dropped it so hard for a while.
By Zhs2 on Jan 19, 2022 (

)
9% in 2:26
Read More
Meh. Any hack that requires turning on moonjump because I got sick of all the tetchy walljumps is not a very good hack, but it has many pretty backgrounds to look at. I had to use moonjump because I have no idea how in the hell you climb the shaft after unlocking level 3 locks legitimately and in fact city core was the place I really started moonjumping anyway. I did walljumps for literal minutes trying to get the second one to activate before that, then realized this kind of hack really wasn't worth that much of my time and life. Some fun ideas in here though, and I enjoyed the shinesparking puzzles - they were about the easiest thing to do.