Description
No description available. We just know that it's a hack of Dependence. 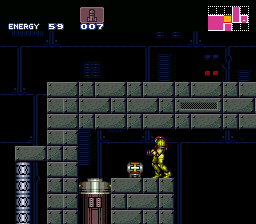 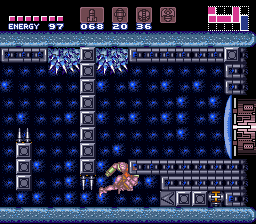 Graphically it's quite nice. I like the tilesets.
Level design is pretty good. The hack is very non-linear, you get some major items really early so you can decide where you want to go first.
Tourian & Escape were also different which is always a plus.

I didn't like that the bomb timer got changed. Bombing is super slow in this hack so no IBJ.

The difficulty is a bit higher than Vanilla as some items are missable so you'll have to keep some mental notes.
There are no advanced techniques required except a short charge during the escape and a really hard short charge into speedball to get the E-Tank in the second screenshot but that one is optional.

I recommend this to everyone. It's one of the better hacks out there and it deserves more attention in my opinion.
By caauyjdp on Nov 04, 2020 (

)
97% in 6:32
Read More
Spent about 11hours on this? oO
This hack needed polish and testing and modern tools.
It looks ok..ish?
There's not enough saves, permastucks(only some were "my fault"), might not be using scroll plms at all?
There's at least one somewhat easily missable item.
Bomb timer change makes playing annoying and seemingly for no reason because I can't recall any place where I through that ibj would be useful here.
Map doesn't save properly which I can't blame old hacks for too much, but it doesn't help.
Wrecked ship is a mess because you can access it really early but won't be able to do much there until later.
A lot of my frustration with this hack comes from not finding varia when it became available.
It's worth trying to see if you'll like it at least.