Description
An exploration based half hack. Started in Double helix, finished in Mage.
Had enough interesting ideas to be released, but mothership was cut.

Alert! Planet Zeb is under invasion from Zebbos. Defeat the Noodian war generals and consult your mother.

A rather non-linear hack, items can be gained as one pleases, exploration is rewarded. Unknown items are unlocked from the start. 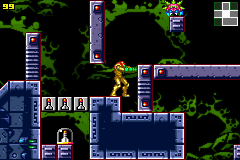 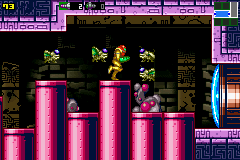 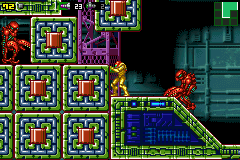 )
% in 3:22
Read More
This is a unforgiving, yet somewhat fun and lighthearted hack, that does more wrong than right. Most of the hints and tidbits are replaced with sometimes humorous notes and jokes, such as the scene of samus landing, before entering the starting area, and getting any item, but good luck getting said items. The path to get ANY item is usually criptic, difficult, unexpected, or completely out of the way. For example, the morph-ball. You need to go UP the chozodia shaft above the start, and shoot at a wall which isn't conveyed to be destructable. And without it, you can't even PLAY the game, let alone beat it. This happens throughout the whole hack. It also relies TOO MUCH on Trial & Error. Save areas WILL screw you over, so save states often, But not TOO often. But here are some usefull tips before i move on further. If you're in kraid, or "Cremo" (Great name btw), before you have the high jump, ice beam, bombs, and super missiles, DO NOT SAVE OR MAKE A STATE, YOU WILL BE STUCK. And if you have the gravity suit, DON'T LOOP AROUND TO THE RIDLEY ELEVATOR AGAIN. Once you get to the worm mini-boss, the room will be the vanilla version, with no way out but down...into a crash. Other than that tho, I haven't ran into any other parts like this.

I only put 3 hours 30 minutes into it, with 8 minutes between of my last save, and the worm crash.
That doesn't mean that this hack is an unbearable peice of Shite, I actually quite enjoyed this hack, mostly for its humor, and the level design was (noticably) trying to be as creative and unique as possible, which really pulled off (EXCEPT SOMETIMES >:[ ). Despite my rating with the pre-shot item balls (what are those actually called btw), I would give this hack a 4/10.

Btw, this hack requires extensive knowledge of exploits, such as "same wall jumping" and "Infinite bomb jumping", and the points it made, like the plasma beam, gravity suit, & space jump being obtainable and usable, is a bit of a stretch. Items obtainable "As one pleases", Simply untrue for the most part. and Exploration stating to be rewarded, when it's literaly required in order to get anywhere, item-wise and Location wise.

This is not definate however, as i am yet to complete this game, and sadly i must restart from the beggining, aswell as playing as a...well...metroid noob when it comes to "Pro Strats". If you speed run MZM, then this game might be easier for you, but as a mostly casual metroid-er, I don't know.

I would call this a Mix in genre, being close towards Exploration, Challenge, Spoof, and Vanilla + (Current genre as of writing), With the difficulty being Veteran, despite being able to, and i quote, "Die less" (whenever you get an E-tank, it says "Now you can die less". I actually mean that the enemies do less damage for the most part).

)
75% in 2:17
Read More
NOTE: For those attempting 100%. This hack seems to have more of some of the items than vanilla, and it makes endgame screen percentage misleading. I have collected 29 missile packs, 24 super missile packs(vanilla has 15, I'm capped at 30 supers, 9 of the packs didn't count), 17 energy tanks(vanilla has 12, I'm capped at 1299 energy, 5 tanks didn't count), 5 power bomb packs, and 14 upgrades(including varia, not sure how it's counted). Endgame screen shows 75% although I'm counting 89 items. Also got "glitched" 87%, 105 items, by clipping into vanilla ridley

Played this through six times so far, around 25 hours total, and will probably play it through a couple more times.
A very nice redesign of vanilla map.
I accidentally managed to miss power grip on first playthrough, which made me finally learn how to bomb jump properly, but I don't think it's actually required anywhere.
It does seem to require you to go through heated rooms without protection, which could be non obvious, but there is an energy tank on the way to heal you up. Nevermind, varia is gettable before that.
Vines in norfair seem to have ungodly amount of hp, not sure what's that about, could be a way of gating you before you have enough missiles/supers, but having to mash missiles every time you pass through was kind of annoying.
It seems you only get one chance to get charge beam, which seems doable with missiles, but you can get supers before that, which makes it a non-issue.
Two states of Imago Cocoon/Kiru Giru room is kind of odd, not sure if it's a bug or intended, but going down to fight Imago hangs the game. You can always get around that by using any other exit.
You can get stuck getting out of the space jump room, if you try to go out the way you came in.
Map/minimap has some issues, like odd exits on the map/minimap that don't seem to exist in the room, and wrong door types, and I'm still not sure if some items are actually there, or if the map is wrong, but that only makes 100% more difficult and doesn't prevent you from completing the game.
Game seems to prevent you from going back from save room just before mother brain, which is a very odd choice.

Other than that, it's like playing ZM again for the first time.
Loved every minute of it.

Other hacks I've played are Metroid Other ZM, Deep Freeze, Winter Mission and Metroid: Spooky Mission. Odd mission is imho best of those, with Metroid Other ZM being close second.
If this were to get a version 1.1 with map/minimap fixed, even leaving all the other issues in, I'd rate it 5/5

P.S. It it possible to get into kraid without any items, and get back out after beating kraid. Way out is even kind of hinted/discoverable without prior knowledge.
P.P.S. There are at least three rooms with items, that are in different states/versions depending on which entrance you used to get in. Some items are only present in specific room states/versions. Might be intended.
P.P.P.S. Possibly permastucks: Going past 2nd(original) hive room without morph ball. Using shortcut to get around "power grip plant"(two ways of getting out that I know of both require speed booster, but having speed booster makes the plant disappear anyway. It might have a 3rd condition to despawn?). Getting missile in top left corner of kraid without bombs or power grip.
By Cpt.Glitch on Mar 28, 2018 (

)
41% in 1:47
Read More
If you've played an Ing-Ing hack before, you'll know what to expect. Meme item messages and names, obscure paths and item placement, punishing enemies, some lame and some good puzzles, and of course, CRUMBLE BLOCKS. THERE ARE SO MANY.

Early game is by far the worst part. You can go two different ways at the start. Going one way prevents you from going back until you grab a certain item. The non-linearity is something I like though, so good on you for that. There is a lot of softlock potential though. A multitude of ammo doors close behind the player where there isn't a steady potential of refill. Now it's unlikely a player will get softlocked there unless they intentionally do it but it still should be prevented. Also a softlock exists on the Kraid-Norfair area connection. If one speedboosts through that hallway they will hit speedblocks in the floor and clip inside the floor. Also it's a half-hack. Those are bad.

Later during the hack (once I had more than 1 e-tank) it turned from a grind to a breeze. Difficulty dropped pretty significantly. There are a lot of items I missed, so I will try to get those. It's a fun hack for sure. Just be prepared to suffer a bit in the beginning and get trolled in other places.
By Tipherath on Feb 03, 2019 (

)
59% in 3:10
Read More
A pretty fun hack that's so bad designed at times that seems intentional, I think it is. The joke notes alleviate part of the frustration of not knowing what to do. Some things to consider while playing this hack are:
* In the first room where the mellow hives are and there's lava on the ground. There's a breakable block near the entrace to pass above them. Vertical bomb jumping may be required. If you decide to kill those two hives, the ones in the next room won't spawn, same if you kill those in the next room.
*You can softblock yourself if you try to get the Varia Suit without the Speed Booster and use the save station while searching for the suit.
*The Plasma Beam is very slow, but if you charge your shots you won't have that problem.

)
47% in 2:34
Read More
What the fuck was this hack?
Started out extremely badly. Forced me into Kraid right at the start, and a softlock right after that if you look around enough. Doors are oddly placed, blocks are inconsistent, bad level design and scrolls, all that jazz.
The difficulty was so unrealistic, getting a few major items was just relying on IBJ and HIBJ. Stupid.
Norfair's a hassle to navigate through, and some of the items just plain aren't there. I couldn't find Screw Attack at all, like what?
All you need to beat the hack is to kill Mother Brain. So you need Kraid and Ridley. Ridley isn't even a real boss lair, it's just something that looks like it's straight out of a boss rush hack. Kiru Giru is useless, and if you fall down after him the game literally hardlocks. Only other crash/stuck I know of in this hack.
Despite all this nitpicking, it was still a very, very interesting hack. The routes are totally changed up, rooms are suuuuper different (for better or for worse, mainly worse). I ragequit at one point but decided to keep playing like a minute later so it was basically in a single sitting.
Overall, I wouldn't recommend this hack honestly. It's too frustrating to recommend to basically anyone and it's just...not fun.