Description
ALERT!¤ALERT!¤ALERT!¤
Broadcasting from GF HQ, Earth.
Our energy tanks have been stolen.
Suspects: Rippers
Order from Adam: Recover the energy tanks from the Rippers' refrigerated hideout. Do not disturb any creatures that are kept in deep-sleep.

A short, but challenging Zero Mission hack. No special manouvers beyond basic shinespark are required to beat this hack, neither are wall jumping* or infinite bomb jumping.
Special thanks for Cpt. Glitch for teaching me few tricks of the trade, and helping me figure out the hex editing.

*Except for a one place near the end, if hi-jump is skipped. 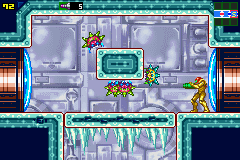 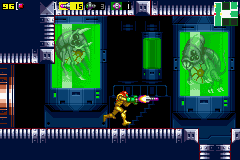 Have yet to play 1.1, so this review is based of 1.0. One of the first actual ZM hacks out there next to Deep Freeze. It contains a radical story, an awesome room state concept that fits the freezing/thawing theme of the contest it was submitted for, and tilesets from other games which give the game a new feel. Level design is okay and fits the challenge theme Ing-Ing was going for, however the design coupled with some enemy placements made for a frustrating time. 1.0 doesn't have an actual ending but I know 1.1 and any updates after that do. Enemies hurt and you have a small reserve of energy and ammo so use caution. The hack is a bit unfair in certain rooms but I believe most of these are fixed in 1.1 and the coming 1.2. An OK hack, especially for a first hack and the first ZM hack, but needs some work.

)
No completion stats.
Read More
Hoo boy. Another ZM hack. I'll start off by saying that I did not enjoy this hack. In fact it was the only contest entry I was not able to finish (I gave up at the Imago fight).

It does prominently feature both freezing and thawing, although it shares Frostbite's problem of the transition to "thawed" being unclear.

The difficulty is very punishing throughout, due to enemies dealing a LOT of damage and the fact that I had zero e-tanks (apparently I missed the 1 or 2 that were hidden, and I also missed Varia). And there's rinka spawners all over the place. And then there's the invincible wavers in many of the rooms, which can only be killed by power bombs or shinesparks.

There's also more than a couple required paths forward with little or no hints, many of them quite early in the game. And either I took a complicated route, or there were places where it was required to do fancy maneuvers involving shinespark chains, freezing enemies in specific places, and/or walljumps.

Getting bombs before morph, and then having to figure out how to enable bombs on the status menu, was very confusing to me. I'll also nitpick that there's one chozo statue that directs you someplace on the map that obviously doesn't exist in this hack.

The metroid room leading into super missiles is pure cancer. Fuck that room.
By frozenLake on Mar 17, 2017 (

)
No completion stats.
Read More
Okay, I'm going to state this: the "escape section" is not fun in the slightest, and I needed to freeze my energy value to something higher than all the energy tanks in the game could provide to survive a /single/ hit. Which you are going to be hit more than once.

Now that we have that out of the way, the hack was actually very disappointing. There are a great deal of situations where you have to avoid enemies, since otherwise they /will/ kill you very quickly, since you don't have nearly enough energy to take them on. This applies to the boss as well.

I also did not like the way that paths were blocked off, either with invisible walls, preventing you from going into places where you think you should, and the solid walls that get triggered after the "defrosting", which again, are dumb, especially if they block off easy access to the extra upgrades.

Not a very good hack, but I'm rating it slightly higher than I would, because I did enjoy the effort that was put into the custom backgrounds and tiles, and the fact that this /is/ a hack of Zero Mission, of which there is a sorely lacking number.
By alexman25 on Nov 16, 2019 (

)
25% in 0:33
Read More
Oh my god why.
Cool concept, but there were so many things wrong with this hack.
The escape section is total ass, I was freaking out during the entire thing. A few passages are totally hidden and the one e-tank you get is totally hidden from you, you need a keen eye to find it. Imagine going through the hack without that e-tank, I know I can't. This was painful, especially with no savestates.
Finished, do not recommend. D:
By Multi-Man on Nov 22, 2019 (