Description
This is a map edit for the original Metroid. Screens, enemy and item placement, palettes, text, and more are all changed. The primary goal was to make the game more playable - the discerning player will note the careful placement of platforms and enemies to make jumps easier. However, beating the game will not be a cinch. Items are much more difficult to get, corridors are contorted into winding mazes, and many of the energy tanks have been completely eliminated. 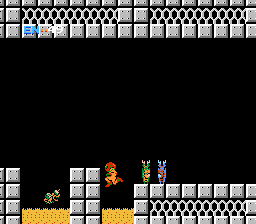 )
% in 2:30
Read More
Really good hack!
Doesn't rely much on original NEStroid to get its ideas and rooms.
Every area is much larger than it is in vanilla, especially Brinstar.
Tourian was changed a lot (the escape was really cool too), so that gets bonus points.
Kraid is accessible early but he's extremely difficult to kill.
Almost every single item that you come across (aside from missiles, of course)is basically needed to beat the game. E-tanks are pretty scarce, only a max of 5 I believe.
Overall, this is a really good hack and I totally recommend it.
Finished.
time is rta

)
90% in 1:35
Read More
The first Metroid hack ever, and it's actually pretty solid. It avoids a lot of flaws endemic to many, many later Nestroid hacks, such as being ambushed when popping out of doors, and it even manages to avoid a problem that plagued the original game: getting sniped by pipe bugs in the middle of a door transition. In other words, the designer of this hack was quite aware of the limitations of the original game, as well as the tools they had back in 1999.

If I had to level a complaint against this, it would be that the world design is a bit too straightforward (Kraid's Lair especially), and that there aren't any hidden secrets -- though folks who find vanilla Nestroid too obtuse and hard to navigate might appreciate those facts.

Still one of the best Nestroid hacks, even 21 years later.