I have included 2 .IPS files, one with Snarfblams Metroid Plus improvements and one with the standard
weapons and no mini map. I found that the wave+ice made the final area fairly easy. If you want more
of a challenge I would say play through with the normal version first then with the PLUS features second. 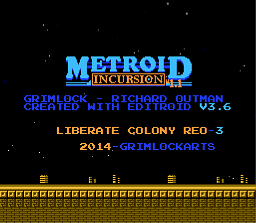 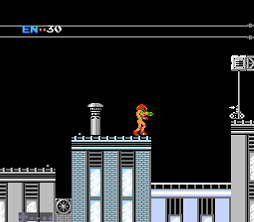 )
% in 1:35
Read More
As far as NEStroid hacks go, this is one of the best out there. It takes NEStroid, and does some very interesting things with it via some trickery, creating an interesting world to explore. The one issue, or non-issue, is that it is pretty linear overall. Every area has a set path for the most part. Other than that complaint though, there isn't much to downgrade this hack over.
By Shadow96 on May 08, 2015 (

)
No completion stats.
Read More
I don't play many M1 hacks, but this caught my attention when it came out. The graphics are superb, areas feel distinct from each other, and the metroid plus additions went a long way to making navigation not feel like a chore. The only complaints I have are the enemy damage, which I felt was a bit too much in some places (notably ridely's hideout), and the fact that the graphics and level design lend themselves to a game that has slope detection. Since metroid 1 does not, it sometimes felt stop-and-start and took away from the value of the artwork as it felt like it was there to look pretty, not to be traversed.
All in all this is easily the best M1 hack out there in my opinion, and unless you really hate the physics and gameplay of the original, you owe it to yourself to give this a try.

)
No completion stats.
Read More
Prior to the release of Rogue Dawn, this was probably the best Metroid 1 hack to exist. The game creates a really unique world through a lot of NES witchcraft and graphical deliciousness, with plenty of quality of life features (saving!) that make this hack really stand out. Despite hating the original Metroid, I played this one to completion. For that alone I'd recommend it.
By RT-55J on Jun 06, 2020 (

)
No completion stats.
Read More
Fantastic.
Looks nothing like a Metroid world and that's what I love so much about it. See the second picture above? That's "Brinstar." Outdoors, under a well-lit night sky. Norfair's a sewer-looking area, Ridley's Lair looks like a military storage area with tanks and rockets, Kraid's Lair being the only area resembling that of an "alien planet" and Tourian the only one resembling it's vanilla counterpart.
This game is easier than the base game as well. It has a few "hurt yourself on purpose to progress" areas, but health is not hard to obtain, as energy and missile drops are very common. Speaking of items/pickups, there's no shortage of missiles or energy tanks. Not at the beginning, not at the end. Nothing is hard to find, as this hack is very linear, as the map shows you everything with little to no hidden rooms not shown on it. I used savestates, not because I had to, just for convenience.
What bothered me, however, was that right before entering Tourian, there's another ice beam and another energy tank, neither of which add to you if you already have the ice beam or the other 6 e-tanks. The e-tanks thing is strange because why is it there if you can't use it? The others are almost impossible to miss so it's not like you couldn't find them. The ice beam thing makes sense if you had the wave beam and not the ice beam, but where was the wave beam? The ice beam is a necessity to get more than 10 minutes in, but the wave beam can successfully evade you the entire game, which sucks if you were playing the Plus edition and were really looking forward to that wavy ice beam as much as I was.
Now I know I started with "what bothered me" and proceeded to type half a paragraph, but really, it's two things: there's an extra energy tank that only helps you if you don't already have six, and I couldn't find the wave beam. That's all. Neither devalue the hack in any way, they're just a few personal things. Still finished it, still great. Good for a solid 1.5 - 3 hours of fun. Oh, Mother Brain is just as much of a pain as in the base game. Those red rings, they're the real final boss.
Great game, far superior to the original, so if you like that, you'll like this.
Highly recommend.
By Kremit44 on Jun 05, 2022 (

)
% in 1:40
Read More
Can't ask for more out of a NEStroid hack than this. It's solid. Felt like I found everything but Wave beam. Oh well. It's a great hack. Completion time is approximate. If you like NEStroid this is an obvious play.
By Zincoshine on Jul 26, 2022 (

)
No completion stats.
Read More
As a metroidvania this is definitely much better than "over the moon". However, it is not something I can recommend as a standalone metroidvania. There are two main reasons for this. First of all, the enemies are simply too glitchy. The lack of polish reminds me of the space junk and blue plague rom hacks for super metroid and guess what? They didn't get a recommendation in part because of problems like this. Second, the developer has failed to design the textures in such a way that the player can tell whether or not it is possible to go through something or not. This results in the player constantly getting stuck. There's also the minor issue of the tile placement just not being very good in certain areas but it is a small problem, to be sure. This get 3/5 orbs due to the presence of a rudimentary map and save slots, but no recommendation.