Description
The difficulty is relatively high.
But for the people who unsatisfactory, hard version also bundled it 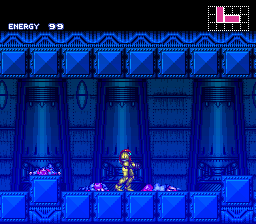 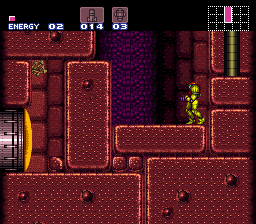 )
No completion stats.
Read More
Hard to rate a hack that came out 11 years ago, when editors hardly (didn't?) exist and were crude at best. Hasn't aged well, but it's one hell of an insight as to how far hacking has come. I'd give it a run for that insight alone.
By Aran;Jaeger on Dec 08, 2016 (

Read More
Animals saved.
Chose Hard Mode.
Note: In the unheadered versions of the Hard & Normal mode, the Gauntlet is corrupted, making the 2 Missile packs and the Energy Tank there impossible to collect by normal intended means (which makes up the difference from 97% to 100%), and otherwise in the headered versions these items should be collectible.

I liked how tourian went this time around.

There's only two problems with this hack.

First is if you don't power bomb for dori the first time, the door back isn't there.
So you have to do the room b4 again, which isn't fun.

Second is I couldn't get past the giant metroid event, the game kept freezing.
I had to use smile & my only solution was set the # of enemies to zero.
Seems like it affects every version.

Wasn't too sure how or when I was supposed to get into the wrecked ship.
I ended up getting spring ball & taking the long way around maridia...

)
100% in 1:49
Read More
Not all that much different from vanilla. Rooms have been altered a bit but items are still in the same rooms. The route for 100% is the same with only a few minor changes. Not being able to go back through the Mochtroid room before Botwoon was slightly annoying for 100% since you are forced to go a longer way around.

There is also a sound-breaking bug at the baby causing the game to hardlock when trying to leave the room so I had to baby skip. 4th hack I encountered with that issue.

Still giving it 3 orbs despite being a halfhack without major changes since the changes weren't negatively impacting my enjoyment. I liked it.
By kkzero on Mar 24, 2020 (

)
No completion stats.
Read More
Played a bit then stopped because it's just a retile of vanilla. Not that it's a bad one, just not enough new to the table for me to chew away an hour or two on.