Description
Ok, this is a patch to release alot of the stuff I've been working on lately. This patch includes:

UPDATE: 12/15/09
Also added to this release:
-new palettes for every tileset
-newer physics (Bloodsonic thinks the old one were shit... so... I UPGRADED! :D)

This is how my mini will play like physic wise...

This is being released because I want you guys to play through Vanilla Super Metroid with my changes, and see how you like it all. I've played a little bit myself, and its defiantly a change of pace. :P

Well, enjoy, and you can use anything from this you want, with credit to me. ^_^

Shout outs goto Grime, DSO and DChronos for a few things including no walljump, keep speed after landing, and the map tile thingy. 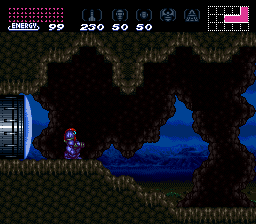 )
63% in 1:35
Read More
Decent vanilla improvement hack.
Changed physics were less than ideal, removing ibj and walljumping really removed a lot of opportunities for fun.
Screw Attack does 1 damage per frame instead of 4096 like in vanilla, so it's almost useless if you want to kill things. There is one potential softlock in the Etecoon pit if you save down there without Ice Beam or Space Jump as you cannot walljump out of the pit.
Something I found really odd with the physics was that diagonal shinesparks are now at about a 30° angle instead of 45°, making Mt. Everest a little more annoying to climb.
Main annoying point with the hack was that Boost Ball seriously destroyed my jump height so I had to turn it off right after I got it. (HJ and Spring are bundled together)
There is no Varia Suit at all in the game, so be prepared for a very slow hp-draining hellrun through Norfair and LN. It's not that bad considering you can get like every other item though.
Bumped up to 3 stars for the hud, suit palettes and tile palettes. Very pretty.
(max% is 66)
By guilhermebrum on Jan 31, 2020 (

)
59% in 6:05
Read More
Criminally underrated hack. I had a blast (pun intended)and learnt me some new moves with this satisfying and addictive gem.
By caauyjdp on Dec 09, 2020 (

)
66% in 2:28
Read More
Do you like dying in shallow pits of of lava/acid? Would you like to aproximate being colorblind? Do you like asking "Why?" rhetorically?
Then SM: Vanilla-- is a hack for you.

)
No completion stats.
Read More
It's not a funny hack, lack of wall jump & the physics only reduce fun :(