Bank $8B is a coding challenge, & bank $8C is a mess, so I went the cheapest route for custom titles.

Vanilla SM uses a 20 frame fade in for the title logo, then switches to a one frame logo.
By changing the one frame logo's pointer to a new spritemap, & including the vanilla title's spritemap,
you can now easily add to the title screen, which will appear after the fade in w/1994 nintendo.

Tiles $E0-FF from the 'Title 2' compressed gfx, under the (nintendo) logo, have been selected.
There's a small annoyance though. Tiles $E0-$E8 also display their $F0-$F8 counterparts.
Tiles $E9-$EF & $F9-$FF have their own pointers. You'll understand from the asm.

However, it's not a problem. Whatever tiles you don't need can be left transparent.
Don't want to redraw your logo 150 times until it's centered?? Change the x-pos instead.

Probably not compatible with scyzer's rom warning patch.
I'm not making it compatible either.
I'm not even using this patch. 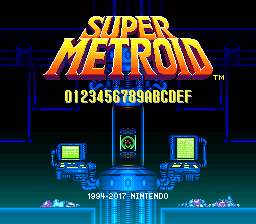 Ratings and Reviews
This resource has not yet been rated.


You must login to rate this resource