Description
this is similar to metrace, same concept, different route and length. and for those who think im an idea stealer, i asked the creator of metraces permission.

now that thats cleared up, here if i have gotit soon i will have put in a rapidshare link for my new hack. i made it in 2 nights. it is tiled repetitively, but it is still fun i think.

the aim as in metrace is get to your ship, move left at the start and go onm a footrace around zebes. ive given a few starting items, along the way i give energy tanks for shinesparking, some optional.

enjoy playing, sorry i couldnt make slopes! i have no idea how! 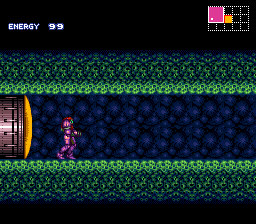 )
No completion stats.
Read More
No real ending. This is extremely boring, you just run around poorly tiled rooms and through open doors through Zebes. Not worth a playthrough (takes like 10 minutes)
Ends when you get back to the ship.
By MetroidNerd#9001 on Jul 20, 2019 (

)
13% in 0:05
Read More
I literally just held the run button, a direction, and the fast forward button through half this hack.