Description
This is both an Exploration and an improvement hack, with features such as beam stacking, weapon and enemy damage tables, and items added after boss defeats, in addition to a very new map. I believe it is harder than vanilla Metroid, but more rewarding, despite the lack of a functioning Tourian (the data is all there, but has problems that I don't have time to learn how to fix).

See my Forum thread for more information about this hack.

After some recent problems during testing, I've slowed Samus down a little and created a second ips with the slower speed. It's still faster than the original, but the door transition problems I was having with the original have now been fixed. 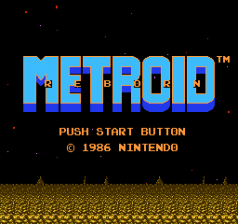 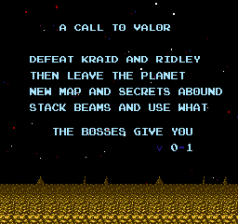 )
No completion stats.
Read More
This is very much a vanilla hack, as there are no palette changes that I could see and quite a few rooms are either unchanged or changed slightly.

As far as I'm concerned, the velocity increase is completely unnecessary and makes the game experience very annoying. Trying to execute precise platforming while Samus is zooming back and forth is ridiculous, coupled with the fact that this hack doesn't fix and even includes more of the issues present in vanilla Nestroid. Enemy spam is everywhere, enemies fly into doors and into your face right when you enter rooms, and the room design is uninspired. There was a strange door glitch in Kraid where I entered the right door in a shaft, and the door I came out was two rooms to the left...??

There are also invisible floors and walls in some rooms. I'm puzzled by this because instead of using transparent blocks you can use regular blocks and make it so the environment blocks the player instead of an invisible wall that removes all immersion into the game.

Also if Tourian doesn't work and I can't beat the game then why play? Collecting the items did not feel rewarding because all the rooms look the same, so there's no point in doing that either.

In conclusion, this hack is mediocre. It's playable.