Description
This is my first hack. Another Metroid Nes Remake - Nes Mission is a hack which makes Zero Mission more similar to Metroid 1 and Super Metroid with the same storyline, so there is the Mother Ship. Is possible to beat the game at 100%,don't worry. I hope you enjoy.
Patch notes:
1.0: publication
1.2: unknown items are obligatory and fixed the varia glitch
2.0: changed rooms wich mades the game not identically to Metroid 1, added vertical doors, changed expansions position in Ridley, edited Chozodia
2.2: changed tileset in all pre-power up room in Brinstar, fixed all glitched bg0 in the rooms, fixed a power bomb room in Chozodia
3.0: added vertical doors on the map, changed some Crateria rooms to make them more accurate to Super Metroid - Gba Edition, fixed varia suit enable effect, changed charge beam position, made easy and hard mode possible to be beaten, general improvement.
3.1: changed some grey doors in a Crateria room to they intended colour, changed a room in Chozodia, Plasma Beam and Space Jump are now required to go to Tourian (for the older versions you needed only gravity), fixed some tile errors, added wall jump whit Space Jump and Screw Attack + Space Jump, added a secret item, fixed the exploding Tourian custscene, fixed the acid effect in Tourian, removed some invisible blocks in Crateria, fixed a non allined spawner in Ridley in Easy mode 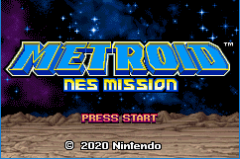 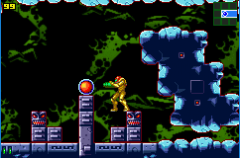 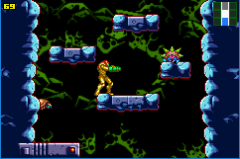 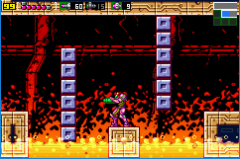 )
% in 1:14
Read More
COULDN'T COMPLETE! (Completion Time is the time at my final save-point)

I liked the hack until Pirate Ship, only real problems were varia transformation bug and lava effects appearing out of lava- I was able to kill Ridley first which was awesome.

I would've given 5 stars, but the Pirate Ship segment was just the original, but filled with Plasma Pirates and was unable to complete escape sequence.

)
No completion stats.
Read More
Honestly, for a first hack this is pretty good...

There are some small things that should be changed, like the spacing of the Platforms in some Brinstar towers but other than that its pretty faithful to the original but still changes enough to make it original.
Its a little bit sad, that the mothership is not changed though.

The Mother Brain fight is horrible though.

)
100% in 3:08
Read More
Played version 1.2 of this for about 4h30m. Got 100% because author was in the chat giving hints, probably would have stopped at around 75% otherwise.
I have almost none experience with nestroid. Level design of nestroidy parts is.. I don't want to say bad. It's on par with original I guess, with very similar looking rooms, and copy/pasted looking segments. Nestroidy also means no slopes, and there's very few places where you can charge speed, tho vanilla places where it'd be needed were changed accordingly. Traversing is still kind of a pain tho. Especially once/since health is not an issue.
There's clipdata errors, potential softlocks if you try to explore before getting bombs, but nothing majorly broken.

Game got a lot more interesting for me in crateria and tourian(and beginning of chozodia that was altered) which were supery parts of the hack.

P.S. Just remembered that map was correct(barring one slight error in brinstar) and that almost brings it up to four orbs for me.
By alexman25 on Jul 04, 2020 (

)
% in 0:58
Read More
Just worse ZM for the most part. Stopped at pirate ship since according to others it's unchanged. Does some cool changes, Worth a play if you want a new experience, but not something too different.
By LetsPlayNintendoITA on Oct 03, 2021 (

)
101% in 2:40
Read More
Another great hack by the Italian brothers. some cool changes and contrary to the old reviews now mostly reviewed chozodia part. Plus new secrets. Can't wait to see your future hacks, brothers.
That Super Metroid-Tourian rooms and that puzzle, tho criticized by some for the use of elements for slopes was great. All in all a great experience, just like SM GBA edition!
By KPF on Feb 12, 2022 (

)
71% in 2:11
Read More
Well, it does what it says on the tin. I like that the zero suit section was left in. Makes it feel like this is what we could've gotten if the original developers didn't get creative with changing Zebes up. I think it also reveals some of the original game's strengths with handing out rewards for challenging sections, or for combing every part of the map. Save stations are generous and welcome. I also like how the hack tries to be more authentic to the few parts of the map that are in Super Metroid.

However, I do have some cons that stick out. The secret item in crateria is weirdly difficult to get and very hidden. Given it's tied more to ZM than Metroid 1, I think it's shoddy. It's also mandatory so you have to put up with this annoyance. More personal nitpicks, I wish the Nofair map station was easy to reach before high jump boots, just because I forgot where they were and was lost for a while. That's typically fine but I feel if this is a more digestible but authentic remake of Metroid 1, maybe the map should be more accessible. I'd also like power grip to be easier to reach. Simply put, platforming in Brinstar and Norfair is a nightmare without it, but power grip is a bit harder to get than in ZM for some reason. Lastly, I might be imagining it, but I feel like some items from ZM which are still in this hack are slightly harder to get. It just feels *off*.

Also, no fake Kraid. Clearly a 0 out of 5 orbs for the utter failure to adhere to the original title's vision for...Kraid...But I'll forgive this critical error to provide a second Kraid or equivalent as it is their first hack, I guess.

But seriously, I recommend this if you don't hate Metroid 1. I'm generally a fan of hacks like these because we get to experience a game in a different style. It should give a new perspective, and this definitely delivers.