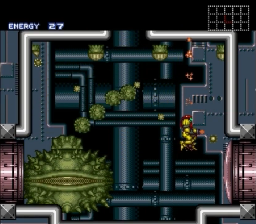 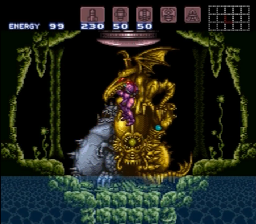 Fighting Ridley with no E-Tanks is rough.

Pretty dumb to get the player permastuck if they don't kill the Skrees in the Space Jump/Screw Attack room before they self-destruct.

Save station in Tourian hardlocks the game which sucks even more because the escape is not that easy within the time limit.

Could have given this 2 orbs but I was pretty annoyed by the permastuck and the hardlock in Tourian.

I don't recommend it.

)
No completion stats.
Read More
Gave up at Ridley. I'd be able to do it with morph ball but I am NOT doing it without.
Did not finish.
Do not recommend.
By kkzero on Apr 21, 2021 (

)
No completion stats.
Read More
Played up until I got to Phantoon's room. Torizo, Spospo, Kraid, and Croco were actually fine with just Charge Beam (+Spazer for Croco), but having to do Phantoon without Missiles or E-Tanks is just crossing a line for me and my poor dodging skills.
I'd hate to just dip on this hack like such, because the sparse item selection actually worked for the first several bosses like I said, but then the curve just shoots up when that scrambling ghost bastard directly follows with nothing in between. And going by the other two folks above, I do not look forward to having to fight Ridley E-Tankless.
Not recommended.