Description
A boss rush.
There are some very annoying graphical glitches in the hack.
Ignore them best you can. Once I find how to avoid them, I will.

The basic idea of Arena is to fight as many bosses in as short a time as possible. I can beat the hack in 20 minutes, if I get all the power-ups. If you get ''all'' the items, you'll finish the game with 73%.

I'd list the items, but some people want a bit of mystery. I will tell you that there are 7 energy tanks, 10 super missiles, 5 power bombs, and 75 missiles . . . Morph and bomb, obviously, but others as well. 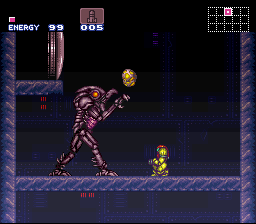 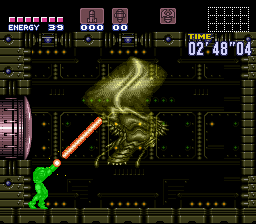 )
72% in 0:17
Read More
Patch is for headered rom.
This hack was not very good, but it had like one cool room (and the rinkas were a cool gimmick).
Varia Suit was out of the way and took me a while to find (thought I had to hellrun through LN room to Ridley), the path to Kraid was absolutely stupid and I had to get help from the readme, tons of items are missable, but I have one major complaint.
There is no Charge Beam.
You must save all of your ammo as best you can/refill ALL of it at Draygon because you need every little bit of it for Mother Brain. It's stupid. I reset two times because of this, and Plasma disappears if you exit the room where it's located!! It's so dumb.
Overall, this is a hack that I would *kind of* recommend playing if you know what to do, but a few parts are just so stupid.
By MetroidNerd#9001 on Jul 09, 2019 (

)
No completion stats.
Read More
It would be neat to play if it actually worked, but if you can't play the hack, it isn't worth squat.
By caauyjdp on Jul 23, 2019 (

)
72% in 0:18
Read More
Patch is for headered rom despite what page says.
Huge improvement on Arena 1.
Animals saved.
Plasma was a bit glitchy, maybe spawn requirement is time? Gravity can be recollected.
Finding path to kraid was annoying even with eventual hint from the readme.