This is a mod of a mod. I modded one of my favorite Metroid (NES) improvement patches: Metroid mOTHER (aka MM), by dACE a.k.a Nitendo. MM is a merging of 3 mods: Metroid + Saving (v 0.3) by snarfblam, MDbtroid by Infinity's End, and 'Roidz by DemickXII.

What I did here is make secrets visible with visual clues and also made it easier for casuals by thinning out the enemies and rearranging some rooms. It should now be a piece of cake to get 100% and the best ending (well it is for me). Metroid is one of my favorite games of all time but that doesn't mean there wasn't always things about it I hated. When going through a door from a horizontal passage to a vertical passage if you were at the top or the bottom, I used to be unsure because floors are not visible until you move down to a lower platform, and ceilings were not visible until you jump up to a higher platform. I am very visual so an absence of accurate visual cues can be confusing to me. This is for people like me and also maybe kids, casuals, and video game newcomers. Actually this is for everyone because people with medium Metroid skills should be able to easily complete the game with 100% and the best ending, and experts should be able to complete the game faster than ever. Speedrunners and racers could enjoy it too I believe.

I also want to mention Neill Corlett's Metroid lua script. Read about it and download here: 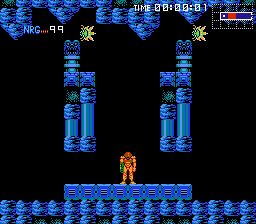 )
% in 0:45
Read More
Time is approximated RTA in hours:minutes from when I patched the file (wasn't too far from game start, don't @ me) to leaving the elevator. Didn't use the lua script because FCEUX is trash for general gameplay.
Some may argue that this is just a dumbed-down easy version of NEStroid. Given the straightforward world design, toned-down enemy placement, lowered boss health, and hallways of just missile tanks, this isn't too nosy of an argument.
However, this is exactly what someone needs if they want the core NEStroid experience without all the pains of the NES era. I'm frankly pretty tolerant of vanilla NEStroid, but I really felt I was enjoying my playthrough of this hack, blasting through everything without a worry about my energy going down. It's just something really enjoyable in this sea of exasperating takes on this game that only appeal to the people trained on games of the time.
Recommended for anyone who can't stand the gameplay/difficulty of NEStroid.

)
% in 0:37
Read More
What kkzero said. This was an excellent vanilla hack. Made the original game a million times more fun to play! Getting out of item rooms was neat as they actually used the gimmicks that the items provided. Navigation wasn't hard, graphics were gud, 10/10.
Finished.
Recommend.
time is rta
By RT-55J on Apr 25, 2020 (

)
100% in 0:50
Read More
Hack over-achieves at its own goals, resulting in something that feels _too_ streamlined. This is most egregious with Norfair, where the entire half of the area behind the hi jump boots was simply excised. I thought the in-game map was lying to me when I saw that, but nope, that area really does not exist anymore.

The boss graphics being on the in-game map are a cute touch, but in every area other than Brinstar the graphics are incorrect.

I recommend neither for nor against playing this hack.