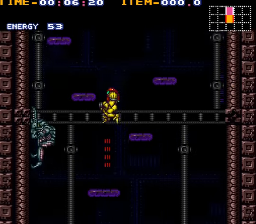 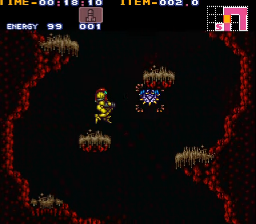 )
No completion stats.
Read More
The enemies are too strong and your beam is too weak and there are door locks every time there are enemies.
More in-depth review: https://imgur.com/a/HnZ5ZgV

What was the point of this hack? It's a bland low-effort halfhack with barely any changes other than bad palettes, increased enemy health (Ridley was obnoxious) and a few extra Speed Booster and Grapple Blocks in a few spots for no reason.

The author learned absolutely nothing from other hacks and even less from his own hacks. It's almost like he doesn't even know they exist. Also, the excuse that beginners need the original layout to have fun is dumb. I'd wager that most people actually get interested in SM hacks for new experiences. At least that was my reason to get into Metroid hacks. Not to play the same old.

Anyway, this hack is bad. Just like all of the author's hacks."

Keep in mind that Juan Dennys, crimsonsunbird, jailsonmendes and pedro123 are all the same person (that's what his profile signature used to say).
Then count the combined number of hacks of him that have been released in a short time. Says it all.

Edit: I see people complain about impossibly strong enemies and respawning doors. That was the case in the first version. Version 1.3 has none of that.

)
No completion stats.
Read More
This hack is absolutely unplayable. Between the impossibly strong enemies and the respawning enemy doors, it became incredible to even get to Brinstar in 2 hours. You know a hack is bad when five people give up during a race. It's just wasting time shooting enemies for minutes at a time to kill a single enemy. It's not fun, it's not enjoyable, and the bosses are ridiculous. There's no reason for this hack.
By alexman25 on Dec 18, 2019 (