Description
This is a linear hack that highly requires save-state abuse and pretty much all skills. You have 1 hp through-out the entire game, and it's a spike-fest. If that wasn't sadistic enough, you can't die, ever. The game has a glitch where you get stuck in the ship and need to reload the rom. This was only made for TASers, but other regular players liked it, so if it's your cup-of-tea, have at it.

Also, I should note that most areas have two paths. Technically, you'd have to beat this twice to experience the full-game. 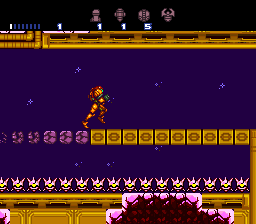 )
No completion stats.
Read More
First off, save states are absolutely a must if you want to play this hack. As mentioned, you literally cannot die, as there is an issue where reloading causes the game to not work. This is a big problem when everything kills you in one hit.

With that glaring fault aside, I really still found myself enjoying this hack, which is probably the only time I'll ever say that about a challenge hack. The tiling is really well-done, the level design is interesting and there's plenty of unique little things going on. If you enjoy challenge or hard-type hacks, play SMMX-2. You'll be in for a treat.

That said, if you don't like challenge hacks, or prefer to play on original hardware, avoid like the plague.

)
11% in 1:21
Read More
As stated, save states are a requirement to be able to get anywhere in this hack, but with that being said, it was extremely fun. Probably the most fun I've ever had with a SM hack. The challenges are super interesting and very diverse. The environments are awesome to look at, and it's just plain fun :)

The only complaint I have is that I got completely stuck in a late game room where the elevator travels through some spikes in the floor. As far as I could tell, by looking at it in smile, there was no possible way to clear the spikes to not die on the elevator, so I had to edit the room and remove them to be able to continue.

If you know how to get past that room without changing the hack, please let me know!!! Otherwise, players beware because you will get completely stuck in that room and not be able to progress without hacking it yourself.

P.S. My completion time is obviously not accurate since I heavily used save states. I'd say it took me around 12 hours real time to complete it, including all the hackery trying to get through that spike room.